A sensor evaluation kit (expansion board) has been announced by ROHM which is equipped with seven sensors (i.e. accelerometer, barometric pressure, magnetic field), designed for use with existing open-source prototyping platforms such as Arduino and mbed.

The SensorShield-EVK-001 evaluation kit consists of an open-source expansion board (shield) with multiple sensors developed by the ROHM Group. Simply connect the sensor shield to an existing open-source MCU-based platform such as Arduino Uno and incorporate software to measure acceleration, temperature and other physical quantities and conditions. The kit makes it easy to immediately verify sensor operation and facilitates the design of sensor devices, significantly lightening development load while promoting the expansion of the IoT market.

In recent years, following the proliferation of IoT in infrastructure, agriculture, automotive and other areas a number of companies have emerged. These companies offer services, applications and devices to meet the needs of the IoT market. However, significant development effort along with hardware and software expertise is required when creating products for the expanding IoT ecosystem. In addition, the development and mounting environment for each IoT device will inherently differ, preventing easy evaluation.

In response, the ROHM Group began offering the SensorShield-EVK-001 evaluation kit that facilitates initial development, evaluation, and prototyping of sets for the IoT and other markets. 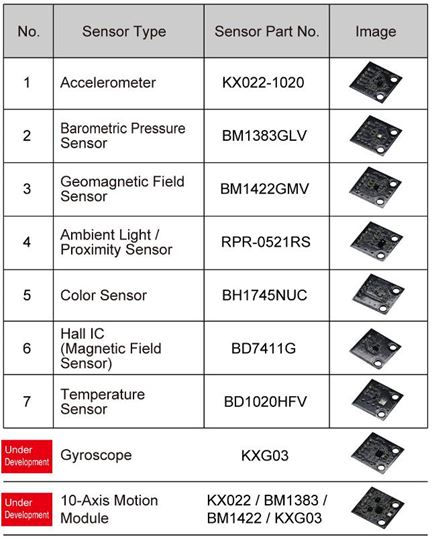 A selection of Boards/Backplanes articles for further reading