Wearables set to revolutionise the route to sporting success

Over the last 20 years technology has altered the way sport across the world is played and officiated. For example, tennis and cricket have each embraced video technology to challenge disputed decisions like line-calls and run-outs, and television referees have been an undisputed success in both rugby league and rugby union to assist the on-field official to make the correct decision when allowing a try.

Even the governing bodies of football, traditionally reluctant and slow when it comes to making progressive changes to the rules of the game, are gradually introducing goal line technology into certain competitions.

However, the next step in integrating the latest technology into the sporting theatres of the world is the advancement of wearables. Indeed, we have recently featured two projects in the US where biometrics are being used within major league baseball and location trackers are employed by coaches in American football.

Rather than wily old Italian coach Claudio Ranieri’s tactical genius, the rapid advances in sensor technology could well be the brains behind Leicester City’s meteoric rise to the top of the English Premier League table. The Foxes are employing the OptimEye S5 from Catapult Sport (above) which is capable of collecting a range of player data, including the impact of collisions, which the club can use to plan player rotations and rest periods. This has resulted in Leicester having one of the lowest injury rates in this season’s Premier League and has enabled them to make only 25 changes to their starting line-up – the fewest in the division.

The system is also being employed by Italian giants AC Milan, and the club’s Head of Athletic Trainers, Bruno Dominici commented: “We use the system during the final phase of rehabilitation. We like to monitor parameters such as speed, heart rate, acceleration, deceleration and change of direction etc - everything that can relate to the injury.”

Former Everton midfielder and Australian international Tim Cahill added: “Technology is playing a positive part in prolonging my career, and the data allowed me to play in another World Cup for Australia.”

The STATSports Viper system (right), which collects and measures both training and match day data for each player, is also being employed by various Premier League outfits. Ryland Morgans, Head Fitness and Conditioning Coach at Liverpool FC, commented: “STATSports Viper affects the way we train based in real time and it allows us to look at key metrics based on certain days of the week. It allows us to either reduce or increase the amount of work players will do. The Smart Training Ground system allows us to make decisions while training is occurring.”

“In the four or five years that I have worked with STATSports, in a number of different sports, the monitoring of player fitness and player welfare has been taken to the next level. Their close allegiance and constant communication with the sports science and medical departments, as well as with the players, has ensured an excellent working relationship and has allowed integration of the data into daily training plans,” commented Dr Gary O’Driscoll, Medical Director, Arsenal FC, and former British & Irish Lions Team Doctor.

Since the game turned professional in the mid-1990s the dynamics of rugby union has changed dramatically as players have become stronger, bigger, fitter and faster. This added physicality has resulted in a number of high profile concussions over the past few years such as when Welsh winger George North (below) was knocked unconscious twice in a matter of minutes during the Six Nations game against England at the Millennium Stadium last year. Indeed, concussions have even resulted in players having to retire due to severe brain injury.

In turn, many medical professionals have called for technology to play a more integral role in the identification, management and recovery of injuries, particularly head trauma. This applies to all levels of the game as a 2013 study from the National Academy of Sciences found that high school athletes had a ‘culture of resistance’ to reporting concussions and following treatment plans.

Wearables such as the Hiji Band were created to detect and report traumatic brain injury in youth sports. An app has also been developed that partners with the Hiji Band to report on all brain injury related activity to ensure parents, coaches and athletes are aware of any damage that has been caused during practice or games so they can take the necessary precautions.

Aviva Premiership side Saracens have also trialled an impact sensor taped behind players’ ears. These xPatches are widely used in American football, where injuries like North’s commonly result in multi-million dollar lawsuits. Another technology undergoing trials is a breathalyser that detects chemicals released into the bloodstream following a brain injury.

In addition, watch any rugby match these days and you’ll notice a mobile phone-sized lump on the back of players’ shirts between the shoulder blades. These GPS devices allow coaches to make substitutions and tactical changes based on how far each player has run, the intensity of their sprints, their remaining energy stores and other indices – and of course it can easily show-up any player that might not be giving 100% to the team.

This is not only key for coaches to identify which players may need the proverbial kick up the backside, it can also help prevent injury. Alek Gross, Southampton FC’s Head of Sports Science, stressed that should a player fail to reach a certain level or effort during training, then they will be more susceptible to a hamstring injury during the game. 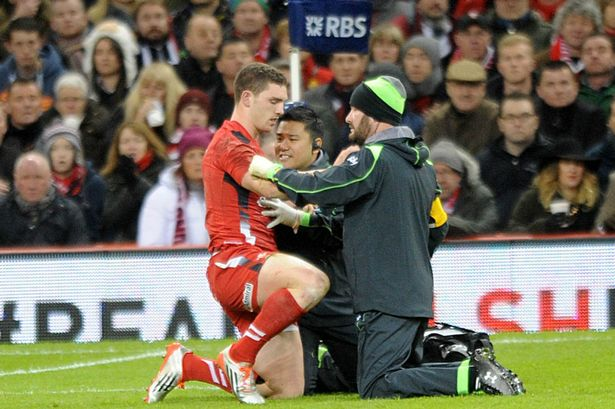 As mentioned, the sheer size of your average rugby player has increased enormously since the advent of professionalism. Indeed, the aforementioned George North, at 6ft 3” and 17st, would be more suited in the second row in the amateur era rather than being a flying winger. As such, modern day heavier players can experience inflamed Achilles tendons if they run over a certain distance in a week. Therefore, tracking devices can play a key role in ensuring certain players get the adequate amount of rest in order to maintain fitness and minimise injury risk.

Elite sport is also embracing cloud technology. For example, during the British & Irish Lions’ victorious tour of Australia in 2013, there were teams of analysts on both sides of the globe, and as such the team moved all their systems to Microsoft Azure. This meant the whole squad could access performance stats, whether they were at the training camp in South Wales or in the ANZ Stadium in New South Wales.

Some sporting purists may feel that the myriad of data flooding into elite sport will lead to a more analytical approach to our most beloved games, will stunt natural ability and lead to players becoming robotic in the way they play the game. Personally, I feel that individual flair will never be truly stunted by any analytical data analysis and surely there’s room for the two to co-exist. It’s plain to see that any sport that has implemented technology into the officiating of the game has benefited hugely, and there’s no reason to think that player wearables would be any different. The truth is that the information provided by GPS tracking data and heart rate monitors etc, will ultimately help keep our sporting heroes where we want them – on the field.