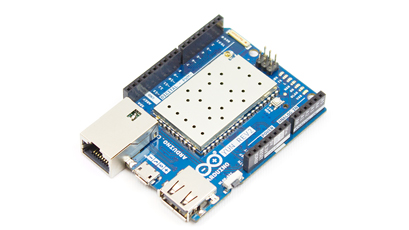 Availability of the latest version of the Arduino Yún Linux-based board has been announced by RS Components. It delivers advanced network connections for IoT (Internet of Things) projects. Offering value and reliability, the Arduino Yún rev. 2 targets use by design engineers, hobbyists and those in educational establishments.

This IoT board is especially suitable for education, as the platform, including hardware, software and documentation, is open source and freely available to all.

The board enables easy connection to Wi-Fi or to a wired network via the Yún Web Panel, plus a dedicated sketch called YunFirstConfig. The web panel enables easy management of preferences and the uploading of the sketch. The board also uses the Bridge Library, which greatly extends its capabilities based on the power of its Linux processor.

A key feature of the board is its dual-processor offering, which includes an AVR Arduino ATmega32U4 microcontroller running at 16MHz, and the MIPS 24K based Atheros 9331 processor, running at 400MHz.

Interfacing to 64MB DDR2 RAM and 16MB of Flash memory, this second processor runs both Linux and the OpenWRT wireless software stack, which enables connection to Wi-Fi and 10/100-Mbit/s Ethernet networks.

In addition, the board makes it possible to call programs or custom scripts on the Linux system via the Arduino to connect with Internet services.

Compared to the original design, the Yún rev. 2 features an improved and more robust power supply, as well as a new Ethernet connector and a horizontally mounted USB connector to save vertical space. The OpenWRT software stack has also been updated to the latest version, including all patches.

The board also includes a series of onboard signalling LEDs, which indicate connection to Wi-Fi or Ethernet networks, along with confirmation of power-on, system activity or connection to a USB key.

The Arduino Yún rev. 2 is now shipping from RS in the EMEA and Asia Pacific regions.