Addressing the trade-off in wearables

Quality user experience is fundamental to successful adoption of any wearable technology, especially as wearable technology evolves from devices with limited functionality but long battery life to truly ‘smart’ and more power hungry devices. User experience not only means delivering functionality and performance demanded by sophisticated consumers, but also ensuring that device operation is as convenient as possible. One factor that dictates convenience is how long the technology can deliver functionality and performance between battery charges.

Evolution of wearables
Our passion for portable technology stretches back further than you may think. As early as the 16th century the first portable watch appeared, while portable calculators in the 17th century took the form of wearable rings during the Qing Dynasty. However, It wasn’t until the late 20th century that the first serious wearables appeared - including the iconic calculator watches and the Sony Walkman. 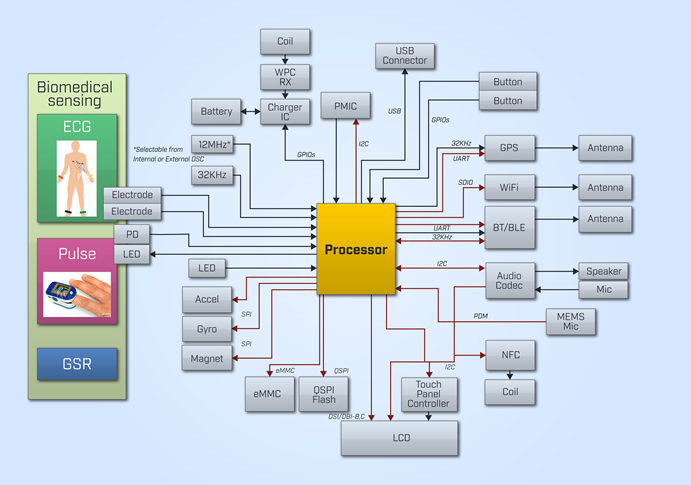 In the 21st century the pace of adoption increased rapidly, most noticeably with fitness bands and more recently with smarter, ‘connected’ devices. Wearables now dominate the IoT with, according to Gartner, over four billion devices already connected and 5.5 million devices being added each day. And while most wearables currently require connection to the outside world via an app on a smartphone, new and emerging wearables have more in common with the smartphone itself than previous ‘dumb’ devices. Indeed, much of the innovation - from MMI interfaces for displays/touchscreens and wireless connectivity elements including BLE, WiFi and GPS - finds its roots in smartphone technology.

A major challenge for designers is creating devices that are sufficiently compelling that the user will want to keep using them and, ultimately, upgrade to the next generation - and the next. This challenge is illustrated by research that shows half of all activity trackers purchased are no longer used, and a third were discarded in the first six months of ownership. Among the reasons for losing interest are lack of functionality, operating difficulties and inconvenience, not least in terms of time between battery charges. The need for wearable devices with high levels of functionality, outstanding performance and excellent battery life is clear.

Design challenges
The requirements of the latest wearable technology demands integrating a variety of functional blocks into a very small space, as illustrated in Figure 1. 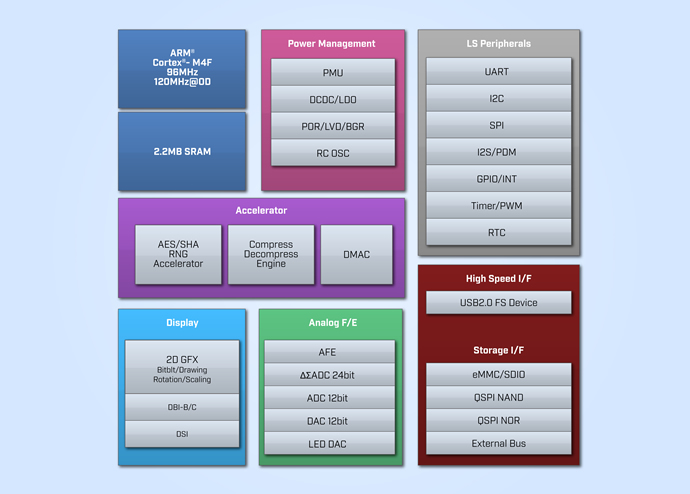 Processors, batteries and power management, displays, audio, MMI, interfaces and security are just some of the areas that need to be addressed. In addition, accelerometers, gyrsoscopes and a whole range of different sensors also need to be integrated, the signals from which need to be collated and processed.

To hit the ‘sweet-spot’ of providing enough performance, in a small enough package, with power consumption optimised for adequate battery life, designers must consider the underlying processor technology very carefully.

Integrated processor technology
To help designers address these issues a growing number of companies are offering processors specifically for IoT and wearable devices. Toshiba’s ApP Lite family of application processors, for example, is specifically targeted at applications such as activity monitors and smart watches. The latest addition to this family is the TZ1200, as shown in Figure 2.

This compact 8x8x0.6mm device is based on a high performance 32-bit ARM Cortex-M4F RISC floating point processor with a memory protection unit and flexible interrupt processor capable of operating at frequencies of up to 120MHz. This core, in combination with the on-board power management functionality, allows the TZ1200 to have an active current consumption of just 78μA/MHz in normal operation mode. With a 200mAh battery and suitable power management software, this translates into time between battery charges of about one week in pulse measurement applications and about one month in watch applications. 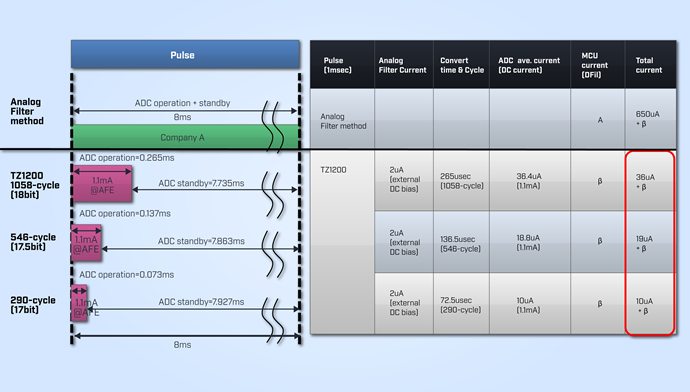 In addition to 2.2MB of embedded high speed SRAM the TZ1200 incorporates interfaces for external memory ICs including SPI NOR, SPI NAND and e•MMCTM. An advanced LCD controller/2D graphics engine supports MIPI Display Bus Interface (DBI) and Display Serial Interface (DSI) protocols and is compatible with HVGA (480x320) displays at 30fps and QVGA displays refreshed at up to 50fps. The 2D Graphics Accelerator (GFX) provides a powerful platform for drawing, rotating and resizing images on a display as well as performing colour conversion. This mitigates load on the processor and contributes to further power efficiencies.

The use of external sensors and peripheral devices that can monitor activity and movement are supported by integrated USB, UART, SPI and I2C interfaces in combination with a lossless compress and decompress hardware engine.

A particularly important element of the new processor is the high precision analogue front-end (AFE) that brings together a 24-bit delta-sigma ADC, 12-bit ADC, 12-bit DAC and an LED DAC. One of the big benefits of the AFE is that it supports direct sensing, i.e. analogue sensor outputs can be connected directly to the high resolution ADC of the TZ1200. This offers the potential for significant space and power savings - as well as EMI reduction and simplified design - by eliminating the traditional ‘pre-conditioning’ elements of high pass filter, high gain amplifier and low pass filter. In the direct sensing scenario, these conditioning functions are performed in software running directly on the processor.

Example application - pulse rate solution
A key application for most fitness oriented wearables is the monitoring of pulse rate. For the user such monitoring must, effectively, be seen to be continuous. Continuous monitoring, however, has a significant impact on power consumption and, therefore, battery life. Conventional designs that use external filtering leave little flexibility in terms of continuous monitoring, as the top line of Figure 3 shows. 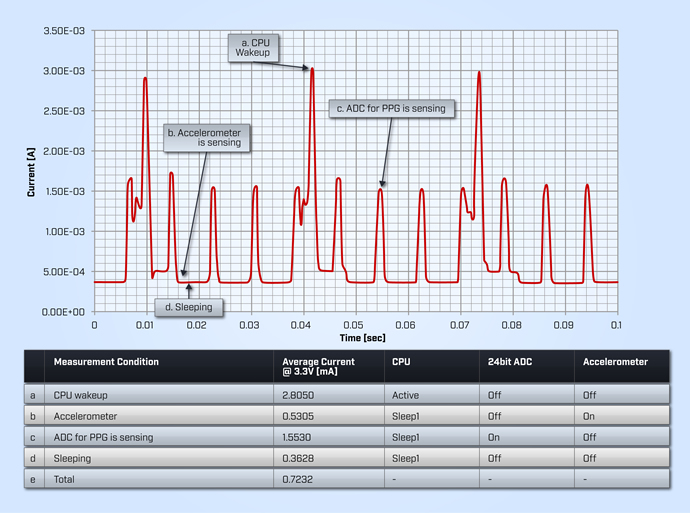 However, depending on the resolution required (optimisation of accuracy and speed can be set for each use case) the TZ1200 can be configured for different levels of intermittent operation. As Figure 3 illustrates, this means that it is possible to reduce the total current consumption of the pulse rate monitoring sensor application by over 98% compared to a conventional design. Furthermore, because the 24-bit ADC has a x16 FIFO, the CPU does not need to wake up every time a sensor signal is received (Figure 4). This means that the average, overall current consumption including LEDs for output pulse rate monitoring can be just 0.85mA.