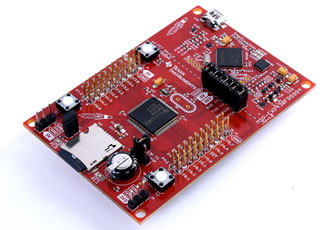 The range of low-power MSP430 FRAM microcontrollers (MCU) from Texas Instruments (TI) has expanded with two low-power families targeting a range of sensing and measurement applications.

The MCUs extend the portfolio from 2-256KB of integrated Ferroelectric Random Access Memory (FRAM) technology, which is a non-volatile memory technology that offers flexibility and low power performance. Additionally, the MSP430 FRAM ecosystem includes thousands of existing software libraries, application notes and driver framework to simplify development across the portfolio.

The MSP430FR5994 MCUs help you save power by spending more time in standby thanks to the newly integrated Low-Energy Accelerator (LEA) for signal processing which, according to TI, completes Fast Fourier Transforms (FFTs), Finite Impulse Response (FIR) and Infinite Impulse Response (IIR) filters and other math functions nearly 40 times faster than an ARM Cortex-M0+ microcontroller. 256KB of unified memory (FRAM) allows for expanded application code, and addresses applications with large RAM requirements, all while offering write speeds 100 times faster than Flash with no buffering or pre-erase required.

The LEA module provides an optimised DSP library with support for more than 50 math functions and a plug-and-play design that allows developers to unbox the MSP430FR5994 MCU LaunchPad development kit and start processing complex math algorithms in less than five minutes. MSP430 MCU developers now have a path to greater signal processing performance paired with the benefits of FRAM technology for a wide range of applications such as metering, building and factory automation equipment and portable health and fitness devices.

The MSP430FR2111 MCUs allow developers to upgrade legacy 8-bit or 16-bit designs with a highly integrated MCU with FRAM memory technology. Even the most cost conscious developer now has a solution that integrates a 10-bit Analogue-to-Digital Converter (ADC), EEPROM functionality, comparator, real-time clock, enhanced timers, internal oscillator with a 16-bit MCU in a 3x3 mm package and a starting 1ku price of less than $0.50. As a result of its unified memory, developers will no longer need to program in assembly, which will get them to market faster, simplify software maintenance and increase code portability. Additionally, the MCUs offer seamless migration and scalability within the MSP430 MCU portfolio. Customers can move from MSP430G2x MCUs to the MSP430FR2x MCU family with ease and then scale within the FRAM portfolio thanks to a common core architecture, tool ecosystem and easy to use migration guides.