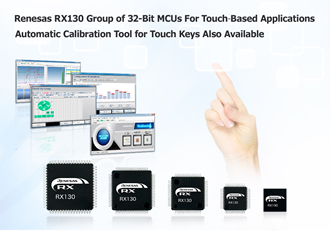 The new RX130 Group combines excellent sensitivity and noise tolerance, making it possible to develop touch keys employing a variety of cover materials, including thick acrylic, glass, wood, fabric, or stone, for use in a broad array of new applications. These include control panels for electric appliances used in locations where they are likely to get wet, home equipment employing recessed switches for a more attractive design and industrial machinery that must be operated with gloves on for safety reasons.

The new RX130 Group complements the existing lineup of Renesas MCUs supporting capacitive touch-based applications, including: the RX231 Group for high-end electric home appliances and industrial machinery, supporting DSP/FPU and enhanced security and communication functions; and the RX113 Group for home equipment and healthcare devices, with LCD display and USB communication functions. With the addition of the new RX130 Group, Renesas’ lineup of touch key MCUs comprises 256 product versions in total, with flash memory capacities ranging from 64 KB to 512 KB and number of pins ranging from 48- to 100-pins. Pin compatibility and software compatibility are maintained between the RX231 and RX130, making it possible to reuse existing software resources and providing coverage for devices from mid- to low-end to high end.

The RX130 MCUs can support complex user interface requirements with support for up to 36 touch keys in self-capacitance mode and up to 36 keys through matrix configuration. The RX130 Group also offers mutual capacitance mode, which allows the number of touch keys to be expanded up to 64, among the most supported anywhere. This reduces the wiring complexity when adding a touch panel and helps simplify the board design. The high-speed processing of the 32-bit CPU means that the load on the CPU is less than 10 percent even during 64-key control. The RX130 Group allow the developer to run very processor intensive applications, while still managing the capacitive touch interface.

Using an on-chip oscillator operating at 15 kHz, a low-power timer that consumes very little power wakes the CPU from the idle state at regular intervals to detect contact with the touch panel. This enables the RX130 Group to achieve an industrial-leading low standby current of approximately 8μA. The low standby current helps reduce the power consumption load imposed when adding a touch key, which enables capacitive touch capabilities for battery-operated and other portable devices with low power consumption requirements.

Using the Workbench6 automatic calibration tool with Renesas touch key MCUs makes it possible to use a graphical user interface (GUI) to adjust the sensitivity and other settings easily, something that was previously complicated by the effects of factors such as the board layout and tracing pattern, the panel material, etc. Future upgrades to Workbench6 will allow it to be used not only as a development tool but, in conjunction with software and information needed for development that is also being made available, including application notes, user’s manuals, and reference software, it will be possible to use Workbench6 with a sample MCU and an evaluation board to confirm and evaluate system operation immediately. An RX130 touch-based evaluation kit that includes Workbench6 is scheduled to be available in February 2016.