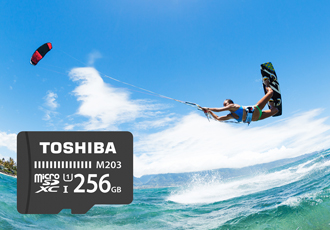 The European availability of a new microSD UHS-I card has been announced by Toshiba Electronics Europe. This card has a read speed of up to R100 MB/s, which the company claims to be the highest speed rate reached in this entry level category. The microSD M203 card is shock proof, water resistant and x-ray proof.

Available in memory capacities from 16-256GB and targeted at the mainstream customer with its cost-effective entry-level design in the UHS-I category, the microSD M203 offers mobile users faster transfer speed and the ability to add 256GB of memory to their smartphones. This means users can download more apps and carry large amount of contents on their devices without concern about storage limitations. Thanks to Toshiba 3D Flash Memory (BiCS FLASH) architecture, the card is able to combine greater capacity.

The new microSD M203 will make its European debut at the IFA exhibition in Berlin running from 1st to 6th September 2017.Toshiba will exhibit in hall 17, stand 104. The card shipments to distributors and retailers will commence in January 2018.