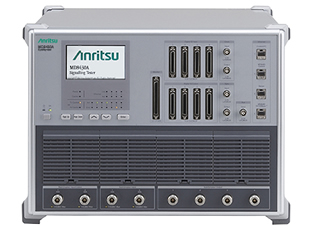 The widespread deployment of high-speed standards such as LTE-A Pro is bringing with it new evaluation requirements such as tests in environments with more component carriers (CCs) offering higher throughput, protocol tests of Cat-M1 and NB-IoT terminals and protocol tests using over-the-air channel modelling to evaluate LTE-A Pro terminal performance on live networks

This, coupled with 3GPP Release 13 that defines new standards related to cellular IoT, is driving the need for a LTE-A Pro protocol/R&D test solution that will help developers bring wireless devices to market as fast as possible.

The Signalling Tester MD8430A is a base-station simulator used in the development of LTE/LTE-Advanced, and now LTE-Advance Pro-compliant chipsets and mobile UE.

Additionally, if the signals are within the same band, multiple base-station signals can be output from one Tx antenna, which cuts the need for multiple MD8430A test sets even when the number of Tx signals is increased by increasing the number of component carriers.

With its built-in standalone fading functions, the MD8430A supports configuration of a high-reproducibility fading environment which is difficult to achieve on a live network, and can be used to control fading in synchrony with mobile communications tests by controlling the fading function at the same interface.

Combined use with the Rapid Test Designer (RTD) MX786201A software tool offers a GUI for the easy creation of test sequences, simplifying the creation of test cases for base station simulation in a MIMO environment and allowing the configuration of various test communications environments that are difficult to reproduce with a live base station.