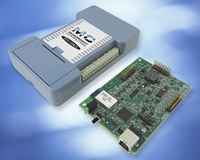 A new Bluetooth data acquisition device from Measurement Computing has been released through UK distributor Adept Scientific. The BTH-1208LS is designed for the growing tablet and smartphone market. It offers multifunction operation, Androidand Windows device driver support and Bluetooth connectivity, and is powered by rechargeable batteries.

The device features eight single ended 11-bit or 12-bit differential analogue inputs, two analogue outputs, 8 digital I/Os and one counter input. It offers both Bluetooth and USB connections and can sample at up to 1 kS/s in Bluetooth mode and up to 50 kS/s in USB mode. For OEM and embedded designs, it is a board-only version which requires user-supplied power.

The included drivers and example projects let users quickly develop apps that run on Android-based devices like tablets and smartphones. Demo apps for the BTH-1208LS are available free from Google Play.