Since the COVID-19 pandemic began, we have become acutely aware of the need to sanitise and disinfect surfaces and equipment. Sanitising with hot water, bleach or disinfectant would be the traditional way to disinfect surfaces, but viruses such as SARS-CoV-2 are airborne viruses transmitted through tiny droplets that are exhaled by an infected person. Sanitising air is very difficult with these traditional disinfection agents which may not be safe for people to inhale.

The effect of UV light on microbes

“UV-A, UV-B and UV-C radiation have all been used in light disinfection systems, but UV-A and UV-B radiation are not very effective in direct irradiation,” explains Freeman. “Because of this, UV-A and UV-B radiation are mainly used in photocatalytic systems rather than direct disinfection by irradiation, which limits their application. However, UV-C radiation, with a wavelength of 160 to 310 nanometres (nm), has a particular germicidal capacity and is more effective for disinfecting.”

The dangers of some UV light disinfection methods The problem with ultraviolet light is that it is generally regarded as harmful to humans.

At wavelengths longer than 230nm, UV light penetrates the epidermal layer of the skin and causes molecular changes in the layers beneath.

“Exposure incurs a risk of cancer or inflammation of the corneas,” warns Freeman. “Many UV lamps use a wavelength of 254nm which can cause extensive damage to human tissue. The problem with this kind of disinfection method is that it cannot be used anywhere near people, which rules it out for use in hospitals, homes, and airports and so on.”

At shorter wavelengths of 200 to 230nm, however, UV has been shown to pose less of a risk to human health while still being capable of inactivating bacteria and viruses. Lower intensity UV light is now being used for disinfection in excimer discharge lamps – specially coated, noble gas-filled emitters that can radiate the desired UV wavelength. The word ‘excimer’ is derived from ‘excited dimers’: a temporary atomic state when high-energy, electronically-excited atoms form molecular pairs (dimers). These excimers give off UV-C photons as residual energy as they return to their original (unexcited) state.

Excimer lamps can be used for disinfection and are an interesting alternative to LED UV-C lamps and arc lamps as they can emit shorter wavelengths, which are believed to be safer for people. Arc lamps may be the cheapest disinfection lamps on the market, but they pose an environmental and health hazard because of the mercury they contain. Excimers can produce UV-C light at a range of very low wavelengths which is currently inaccessible with UV LEDs due to their very short lifespan at this range.

An example of an excimer lamp is the Care222 series from Ushio – a new line of krypton chloride (KrCI) excimer lamps that are highly effective at reducing microbes. The product emits a narrow spectrum with a peak wavelength of 222nm to disinfect areas from MRSA, influenza, MERS-CoV, as well as other viruses, and has also been shown to be effective against SARS-CoV-2. An optical-bandpass filter prevents any energy with wavelengths outside of the desired range from leaving the lamp.

According to Freeman: “The short wavelength of the Care222 is a huge advantage as this is believed to make it safer for people to be around. You don’t need to exit the room or be wearing protective clothing and no toxic chemicals are involved.” 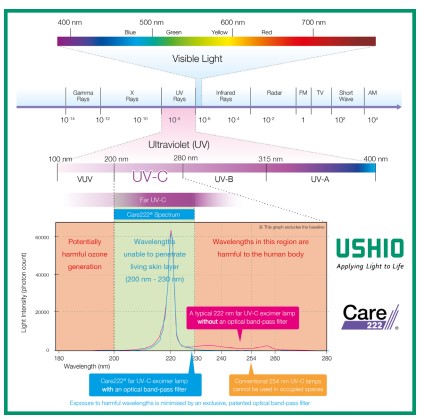 The versatility of excimer lamps

Excimer lamps have the potential to be used in public spaces, surgical sites, industrial kitchens, sanitary facilities, elevators, and anywhere general air disinfection is required. “For example, you could install them in a wide variety of public spaces and have peace of mind that the air that people are breathing has been treated and cleaned,” says Freeman. “Excimer UV-C disinfection lamps are ideal for a whole range of applications and are portable, versatile and highly effective at reducing dangerous microbes.”