Supplier of voice solutions for IoT products, XMOS, has announced the launch of the XVF3000 family of voice processors, which provide far-field voice capture using arrays of MEMS microphones. With optional support for Sensory’s TrulyHandsfree technology, XMOS claims that the XVF3000 family provides the most flexible and cost effective always-on voice interface in a single device. XMOS also announces the availability of the VocalFusion Speaker development kit (XK‑VF3100‑C43), which includes an XVF3000 processor card and a 4-mic circular microphone array. 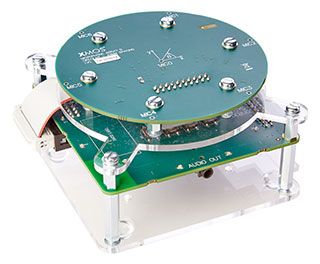 “Today is a very significant day for XMOS. We’re introducing XVF3000 and VocalFusion Speaker as the first in a range of voice capture products. Based on our powerful and flexible xCORE microcontroller architecture, XVF voice processors open up new possibilities for designers looking to deliver high performance voice capture in a very cost-effective form factor,” said Mark Lippett, CEO at XMOS. “We’re excited to be at the forefront of the revolution driven by products like Amazon Echo and Google Home, which have shown the possibilities for voice interfaces. We are working worldwide with customers and partners to accelerate the adoption of voice as the interface of choice for the Internet of Things.”

XVF3000 devices include speech enhancement algorithms that include an adaptive beamformer, which uses signals from four microphones to track a talker as they move, coupled with high performance full-duplex, acoustic echo cancellation. XVF3000 devices can be easily integrated with an applications processor or host PC via either USB for data and control or a combination of I2S and I2C. Developers can quickly add custom voice and audio processing using the XMOS free development tools.