The automotive industry is undergoing one of the biggest periods of change in its history as drivetrains migrate from the internal combustion engine (ICE) to electric motors. While technology development is making great strides in increasing the range of modern electric vehicles (EV), one of the greatest impediments to adoption is consumer concern about being stuck with a flat battery – the so-called ‘range anxiety’.

While much of the thrust to address this challenge has been in making batteries better and vehicles more efficient, other approaches are also coming to the fore. One of the most interesting is the ability to charge EVs wirelessly, allowing batteries to be topped up while the vehicle is in use and with no ‘hard-wired’ connection to the power source. Semiconductor technology has a significant role to play in the success wireless EV charging (WEVC).

Adopting a new technology involves a process of change, which can be a struggle for many mainstream consumers – unlike the ‘early adopters’ who seem to enjoy change for change’s sake. With EVs being early in their development, range anxiety is often cited as a reason for adoption being slower than predicted. Even on a full charge, the average EV has a far shorter, and for anything other than local commutes, a hugely inconvenient range versus gasoline-powered vehicles. This means that recharging away from the home is likely to be a necessity. Also, charging stations are nowhere near as common as gas stations leading to the prospect and fear of being stranded. Finally, charging times, although coming down significantly thanks to advancing power management technology, are still much, much longer than a conventional refueling stop.

While charging infrastructure is expanding rapidly, especially with companies such as Volkswagen AG investing $2 billion in clean car infrastructure in the USA as part of a settlement of the diesel emissions scandal, many companies are looking at other ways that vehicles can be recharged more conveniently. One of the key technologies being discussed and evaluated is wireless charging – particularly to eventually be able to charge vehicles dynamically.

While wireless charging is seen by many as a new technology, it is over a century old. Way back in 1894, in New York City, Nikolai Tesla powered lights across a laboratory room, demonstrating the viability of the technology. Little else happened until the recent growth in mobile devices brought the technology to the fore, mainly because of its convenience for users.

In principle, wireless charging works in a very similar way to wired charging. Mains voltage is converted to direct current (DC) and used to charge the battery. At higher power levels, a power factor correction (PFC) stage is used. Most mains-based chargers employ a galvanically isolated transformer and this is the essential difference between wired and wireless chargers.

In wired applications, the transformer is a single unit with a core that ensures that (almost) all of the flux generated in the primary is coupled to the secondary. This ensures a high level of power transfer, giving an efficient charger.

By replacing the core with air, the flux transfer is reduced. If, in a core-based transformer the coefficient of coupling (k) is approximately unity then in a wireless application, k will be closer to a value of 0.25. The actual value will be inversely proportional to the distance between the two coils and will also reduce if the primary and secondary are misaligned.

However, the situation can be improved by introducing a magnetic resonance on both the primary and secondary sides. By using two tuned circuits, power is transferred at a specific frequency and the efficiency of power transfer can be approximately doubled when compared to a non-resonant approach. 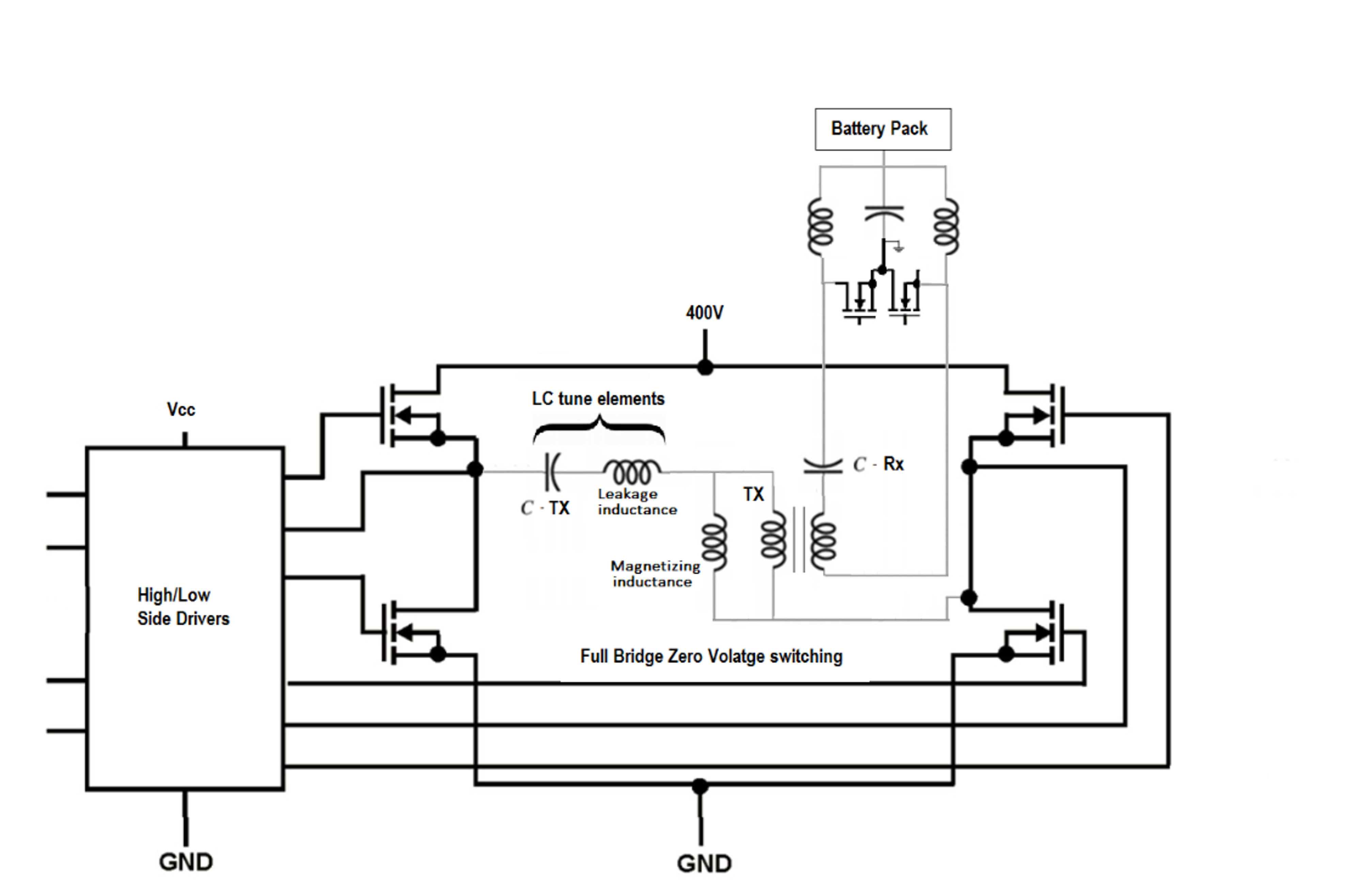 An additional advantage of this approach is improved electromagnetic interference (EMI) performance, which is essential for wide-scale rollout of wireless charging. It also permits the use of techniques such as zero voltage switching (ZVS) or zero current switching (ZCS), both of which significantly contribute to extremely efficient power transfer.

While plugged power will remain the best method for recharging deeply discharged batteries – certainly for the foreseeable future – the goal of WEVC is to top up batteries while the vehicle is travelling. The ability to charge vehicles while they are being used will enable greater ranges, or the use of smaller batteries that will also extend range by reducing battery / overall vehicle weight.

In recent years, many academic organizations and companies have been involved in developing prototype systems to enable WEVC. Some of the systems have been designed with the goal of static WEVC, such as the one developed by the Fraunhofer Institute for Integrated Systems and Device Technology (IISB) that places coils close to the front of the vehicle thereby reducing the coil size significantly.

Another application of static charging systems was demonstrated in 2017 by the Regional Transit Authority of Central Maryland. They installed a static charging station along the route so that buses could be topped up while waiting for passengers to get off and on the bus. In doing so, electric busses are now able to complete any route within the network.

The ultimate goal, of course, is for vehicles to be recharged while travelling at highway speeds and a number of companies have made progress in this area. Qualcomm’s dynamic electric vehicle charging (DEVC) system has been shown to be capable of providing up to 20kW of power at highway speeds of around 60mph. Among other significant developments Japanese automaker, Honda, presented a paper on high power dynamic charging that describes tests on a system with a charging power of 180kW (600V DC @ 300A) that will charge while driving at speeds of up to 96mph.

While each of the individual approaches are making great leaps forward, interoperability of the various approaches is essential and, to this end, the Society of Automobile Engineers (SAE) recently published the SAE J2954 standard – the first worldwide specification for wireless power transfer up to power levels of 11kW.

Wireless charging holds the key to overcoming objections to EV, such as range anxiety, and contributing significantly to adoption of this technology on a global basis. Initial roll-outs, such as the bus system in Maryland, are already contributing, but dynamic charging schemes such as those being tested by Qualcomm and Honda, amongst others, will eventually deliver the ultimate goal of EVs that have unlimited range and convenience beyond that of gasoline powered cars.

At the heart of this revolution are the semiconductor devices that will ultimately deliver the efficiency and reliability required to make these theoretical solutions a mass-produced reality and success. ON Semiconductor is one company that is very active in this area and has some of the broadest experience in terms of power management and highly efficient power conversion. Within its product range ON Semiconductor provides a comprehensive range of products including discrete switching devices such as highly efficient IGBTs and MOSFETs, MOSFET drivers, voltage and current management systems, AC-DC controllers and regulators, intelligent power modules and battery management products.

A selection of Wireless Microsite articles for further reading