Home > Industries > The art of 3D: Creative technology for the ages
Production

The art of 3D: Creative technology for the ages

There has never been greater opportunity for creative freedom as there is today. With access to powerful software and hardware, professionals in creative industries today are able to put all of their efforts into bringing their vision to life – without being held back by technology.

Creative vision often used to be limited to creating and delivering what was easy, achievable and realistic. A decade on, and with several investments in technology along the way, the creative process – from modelling and texturing to shading and rendering – has allowed 3D artists to create increasingly detailed models faster and more seamlessly.

In the past, when processors (CPU) and graphic cards (GPU) didn’t have the high-performance capabilities they do today, artists were constrained by the number of triangles and faces they could achieve and the textures they could create in a character model.

This lack of processing power made things challenging for the artists working from home using a single workstation as everything took so long, especially when creating animations. Even the difference in hardware now compared to three years ago has given many artists’ workflows a huge boost.

In my everyday workflow, I now use the 3D sculpting software Zbrush and several GPU renderers including AMD Radeon ProRender, while my hardware includes AMD Radeon Pro WX 9100 Graphics (provided to me by AMD) and an 8-Core 4.0GHz processor with 64GB RAM. With previous hardware a few years ago, I was creating models where 20 to 50 million triangles models were considered a lot for a freelancer. But today, my workstation can handle upwards of 200 million triangles. So for high poly models going up to 70-120 million of triangles is nothing special anymore.

Meanwhile, for texturing, I use Substance Painter and 3D Coat and my hardware includes at least 8GB of video memory. This is really the minimum you can have for texturing a standard game character with a 4096-texture set, which means a resolution of 4096 x 4096 pixels. This is a huge jump from the start of my career, back when the texture limit was 1024 x 1024 per character.

Technology advancements such as these have not only allowed creatives to develop more realistic and vivid characters, but have also enabled real-time rendering, which means they can see any changes as they make them, resulting in a much faster workflow. They also have the ability to produce photorealistic images that help create a highly detailed and believable 3D world.

You can also easily light scenes and models with single HDRI images and include photogrammetry scans in your modelling workflow – real world items and human 3-dimensional scans based on photo sets taken around objects, which can also include high resolution textures.

Overall, this helps make the creative process much more fun, as you’re not having to wrestle with your hardware. There really has never been a better time to be a video game designer. 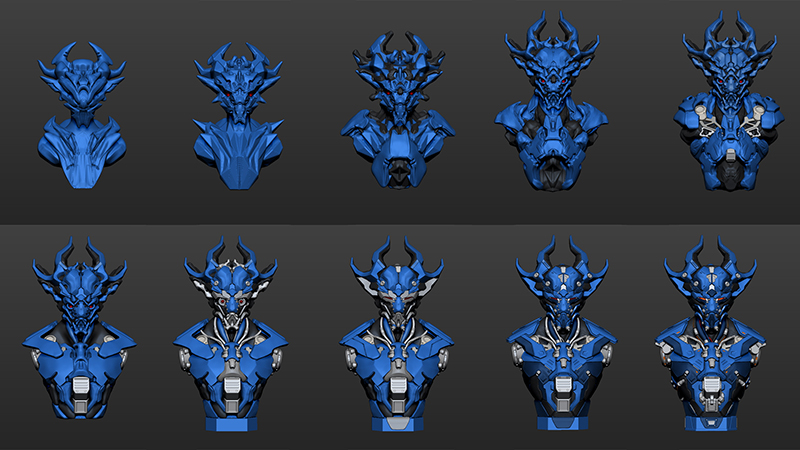 The affordability of software and hardware tools has continued to improve, to support this technology journey toward creative freedom, and 3D artists and developers can now focus on using superior software and their skills to their full potential.

However, how you balance performance and value depends on your needs. Requirements can change depending on whether you’re earning money from rendering work, or whether you’re modelling and texturing high-end video game characters where you need to be able to work in real-time with multiple 4K textures sets. Or whether you’re creating simple models for mobile games or lower-end video games, where you don’t need to display as many textures at once. If you need a lot of video memory, it can be difficult to find the right balance, but you should always buy the best GPU you can afford to help boost your workflow.

3D artists come into the field from diverse backgrounds, both technical and artistic. To be a 3D artist, you need some creative skill, but creativity is something you can nurture throughout your career. As for technical skills, if you don’t already possess these you can learn (although it’s harder if you don’t have a background in computing). Saying that, today’s software tools are far more accessible and user-friendly, helped by powerful hardware that speeds up the workflow and improves performance. For instance, nowadays you don’t have to start modelling with a base mesh, you can create forms and shapes without using any mathematical or technical approach. So effectively whatever jumps out of your head can materialise as a 3D model.

While technical skills and an artistic background will make your first steps in your career as a 3D artist easier, patience is also a key skill, as you’ll need to work for many hours a day to hone your craft. I recently taught two people from scratch, neither of whom had much experience with specialised computer software, and now they are working as successful professional 3D artists. Both have a high level of patience, persistence and a willingness to learn and develop.

Being Polish, it’s also exciting to see the growth of this industry in my home country. There are great 3D artists and developers here, and with today’s modern technology, we are now afforded the same level of creative freedom as those users in western Europe and America, where the biggest productions are made.

The Polish home-grown game development industry is evolving, with studios including Flying Wild Hog, The Astronauts, 11 Bit Studios, CI Games, Techland, People Can Fly and CD PROJEKT RED – of course, the much-anticipated Cyberpunk 2077 is on the way next year. Not only are these companies attracting employees from around the world but investors too, drawn by the investment opportunities in the local industry.

AR & VR: The next frontier

While powerful hardware is currently used to provide the best possible experience to users via a screen in front of them – through the use of, for example, AMD FreeSync Technology and 8K screens – the next frontier will be immersive experiences, such as VR and AR.

The professional applications of VR and AR is already advancing, with 3D artists using headsets such as Oculus and HTC Vive to sculpt and draw in VR. This will be the next step on our collective technology journey and an extremely exciting one for creatives here in Europe and beyond.

To see a video of Jaruga working, click here.