European scientists have employed new photonics technology in order to develop a new augmented reality surgical visor in a bid to improve accuracy of interventions, showing anaesthetic and medical data while superimposing a patient’s x-ray in perfect unison with their body, meaning surgeons never having to look away during an operation and surgery times reduced by over 20 minutes for every three hours.

The VOSTARS (‘Video Optical See-Through Augmented Reality surgical System’) medical visor is a Head-Mounted Display (HMD) system that is capable of superimposing the patient’s x-ray images in 3D unison with their anatomy.

The visor also presents a patient’s anaesthetic data, heart rate, body temperature, blood pressure, and breathing rates, conveniently into the surgeon’s field of vision, in a drive to increase accuracy by focusing on the operation and reduce time by never having to look away.

The project forecasts a significant improvement of the intervention accuracy coupled with a reduction in times spent in an operation and under anaesthetic by at least 11%.

Although augmented reality for surgical procedures has been talked about in academic and industrial research since the 1990s, a tool joining a surgeon’s natural perception with patient data has not yet been widely implemented. 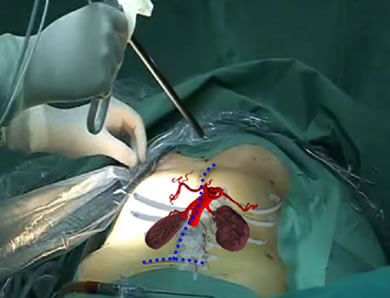 However it has been the use of photonics components, with the small, high-luminous micro display, the LED optical waveguide, and the array of microns to project a 2D x-ray image in front of the user that has been fundamental to realising this one time science fiction.

Project coordinator Dr Vincenzo Ferrari, biomedical engineering researcher at the Department of Information Engineering, at the University of Pisa, explained: “With this state-of-the-art, highly ergonomic visor, we intend to provide all the information required to improve surgery. The primary goal is to reduce not just surgery times, but also the time spent under anaesthetic and the cost involved in any operation.”

“For the patient, this means saving off 20 minutes of every three hours of surgery and the guarantee of an extremely accurate intervention,” said Dr Ferrari.

In the same way that a facing camera on a smartphone films moving images, the VOSTARS system works by capturing what the surgeon sees from a head-mounted camera. The system then ‘merges’ this footage of reality with the patient’s medical images, from CT, MRI, or 3DUS scans.

The central processor, using the most advanced registration techniques available for surgical navigation, then presents a real-time hybrid image on the visor ‘dashboard’ to the surgeon.

“Imagine driving with a sat-nav: we know how to drive and roughly where to go, but with real-time information, like speed, distance and time presented to us, we can take the most efficient route in the quickest time and perhaps more safely.”

“However, rather than having that information on a small GPS screen, our important patient data, like the surgical target in the anatomy, anaesthetic info, breathing and heart rates for example, are all integrated instantly into the surgical visor.

“A clinician can move freely while still seeing the patient, the hybrid x-ray image and all of critical data all at once in a surgical ‘dashboard’ inside the screen. The surgeon, the patient and the procedure are all at one.”

Hybrid
Scientists at VOSTARS are building a hybrid of the two existing AR headsets approaches that combines all the benefits of both a Video See-Through (VST) system and Optical See-Through (OST) head-mounted display.

Fabrizio Cutolo, engineer and expert in wearable augmented reality systems, believes neither VST nor OST alone was suitable for operating on a live patient: “When operating on a real person, it was clear to us that the benefits of OST and VST systems could be combined to make a hybrid device.”

In ‘Optical See-Through’ (OST) systems, as in Microsoft Hololens, the user has a direct view of the natural environment with the computer-generated images superimposed on a user’s field of vision using a semi-transparent mirror. This gives the user a more naturalistic experience, superimposing small amounts of the virtual onto the real world.

With ‘Video See-Through’ (VST) systems (as seen in the Occulus Rift headsets), the user is submerged in the virtual world, seeing through a closed Head-Mounted Display (HMD) together with stereo cameras, experiencing life through screens. Since VST systems capture the video-image as seen by the user in real time it is good for aligning the real and virtual worlds.

“For something as critical as an operation, we had to have the naturalistic ‘feel’ of OST, while having the fluid interaction of the VST. Therefore a brand new device had to be made from scratch, rather than extend an existing technology. The VST-OST Augmented Reality hybrid was born”.

Already three months into the three year project, VOSTARS aims to have a working prototype of the hybrid device ready for May of 2018. Initially being trialled on a number of procedures to the head, including Maxillofacial (jaws and face) surgery, neuro surgery, ENT (ear, nose and throat) and orthopedic surgery, the project hopes to be available to end users in three years, with mass production by 2022.

Coordinated in Italy at Department of Information Engineering and the EndoCAS Centre for Computer Assisted Surgery (Pisa University), the VOSTARS project received a grant of €3,816,440 from Horizon 2020 via the Photonics Public Private Partnership.