DC fans are called upon by engineers in many situations and applications to provide forced-air convection cooling. Thanks to their widespread use, they are relatively easy to understand and can be implemented in a variety of configurations.

Their operation is ultimately rooted in basic physics in which moving air is effective in cooling objects by absorbing heat and transferring that heat to be dissipated. How much energy is transferred is reliant on several factors: the mass of the moving air, the specific heat of the moving air, and the temperature change imparted to the moving air. 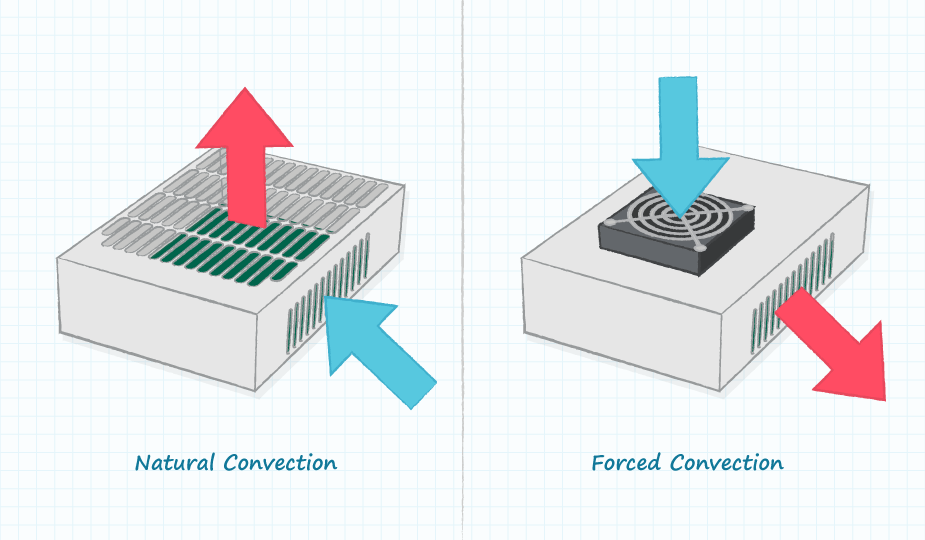 Once the thermal analysis is complete and the proper fan or fans are selected, an engineer could simply connect the fans to a power source and allow the fans to provide constant forced-air cooling. However, in most cases this approach is neither efficient nor effective long term. Most fans today offer a range of options for better monitoring, control, and management. Understanding the options available can allow engineers to get the most out of their chosen fans and ensure better reliability of their overall system.

As mentioned above, running a fan full time is a simple approach to thermal management that can certainly provide the necessary forced-air cooling in an application. However, this simplistic approach is not energy efficient as a constantly running fan uses the greatest amount of power and causes audible noise not suitable for every scenario. Fans also contain various moving parts with long, but finite life cycles that will wear down quicker during continuous operation.

But on/off fan control is another method that is rather simplistic by nature and introduces its own set of limitations. From a thermal management standpoint, on/off fan control creates sequences of heating and cooling to the components being cooled. This thermal cycling can be a major factor in premature component failure because the differences in temperature-coefficients cause added stress on materials and joints. In fact, thermal cycling can be as detrimental or worse for components than operation at constant high temperatures.

Thermal overshoot can also come into play during the time a fan begins operating and the time the forced air begins cooling. Unless the 'fan on' setpoint is set lower, overheating can occur while the cooling airflow catches up. Lastly, to limit on/off chattering around the setpoint temperature hysteresis will need to be added.

The graph below was created to demonstrate thermal overshoot due to unavoidable thermal lag in on/off fan control applications. In the graph, the light blue line represents the desired setpoint temperature and includes a step change, the green line is the on/off cycling of the fan, and the dark blue line is the actual temperature. 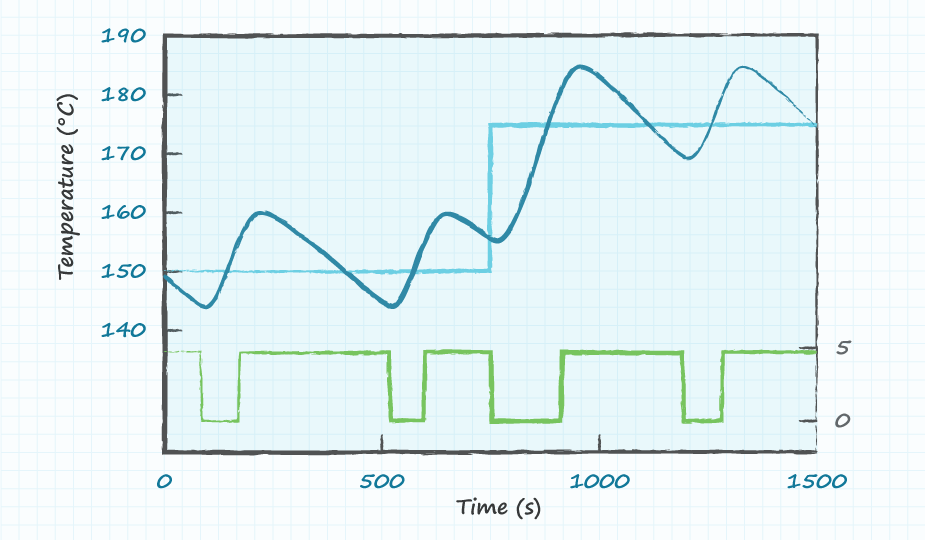 Thermal overshoot and lag due to on/off fan control

Fans today are available with a range of controls and protections to help designers better optimise their thermal management systems. These controls can take the limitations of basic on/off control and improve upon performance, reliability, and efficiency. There are also protections available that detect fan problems early on, which can extend fan life and ensure systems are not put at risk. To understand some of the most common fan controls and protections as well as their implementations, read the following sections below:

Pulse-Width Modulation (PWM) is used to control and change the fan speed based on varying thermal conditions. As the first step towards improved fan performance, PWM-based variable-speed control results in better operating efficiency and can be implemented alongside advanced control algorithms. These advanced control algorithms can take into account usage patterns, energy costs, and more, while adapting to operational dynamics that match fan speed to thermal load.

This can be taken a step further by upgrading basic on/off fan control to the well-known Proportional-Integral-Derivative (PI and PID) closed-loop control strategies. PI and PID controls help to avoid thermal undershoot or overshoot despite load changes by ensuring the airflow keeps conditions at the desired setpoint temperature.

Sensing and reporting on a fan’s rotational speed via a pulsed signal, embedded tachometer is a control used for closed-loop feedback and more advanced fan control. Embedded tachometer also serves as a lock sensor if the fan seizes operation due to loss of power, obstructions, or any other reason. Having these detection capabilities is a major benefit to system operation, as the sooner negative conditions are detected, the quicker the system can be shut down or put in an inactive state to protect sensitive components.

Auto-restart protection detects when the fan motor is prevented from rotating and automatically cuts the drive current. This protection serves to both protect fan-drive circuitry and indicate to the fan controller that there is a problem due to the drive current being cut-off.

True to its name, rotation detection/lock sensor detects if a fan motor is operating or stopped in order to safeguard against problems at start up or during operation.

DC fans are a go-to solution in many thermal management systems, providing forced-air cooling to systems and keeping components within their operating limits. However, simply selecting a fan and running it full time or using basic on/off control are short-sighted approaches to thermal management with fans.

With a host of fan controls and protections, engineers can better optimise their forced-air cooling solutions for greater efficiency and reliability. CUI Devices makes the selection process easy with range of DC axials fans and blowers with multiple sizes, airflow ratings, and control options.