Our website is made possible by displaying online advertisements to our visitors. Please consider supporting us by disabling your ad blocker.
Home > News & Analysis > Like (CEO) mother, like (CEO) daughter…
Women in Tech

AND Technology’s CEO, Nicola Thorn, shared her experience of growing her consultancy which focuses on product development in the IoT. Nicola was joined by her mother Valerie Lynch, who is the founder of AND Technology. Diverging from traditional companies that use the patriarchal suffix ‘& Sons’, Beatrice O’Flaherty offers a refreshing account of this female-led and family-run business.

AND… what do they do?

AND Technology seeks to make product development more efficient for its customers. Such efficiency is achieved through the company’s testing services, particularly in regulated markets such as the medical industry.

Helping customers to design and develop these products, AND Technology also gathers the evidence required to prove it meets regulatory standards. The primary tools utilised are called ‘c2’ and ‘Tento’. Aged just 10 years old, Nicola began programming. Having grown up with a software engineer as a mother, it seemed the natural route of progression and led her to complete a Mathematics PhD from Reading University. Valerie noted that although she didn’t begin programming quite as early as her daughter, her fervent interest in the field emerged almost as quickly. At the age of 17, Valerie found herself entangled with computing as her then-boyfriend went to study it at university.

She recalled: “I became obsessed – not with the boyfriend! He went quite quickly but the computing stayed.” Upon leaving school, Valerie landed herself a job as a computer programmer. She was trained in Programming and Systems Analysis, and then went on to study Maths and Computing at degree-level so that she could better understand the mathematical basis of programming. She noted that this “led [her] into the more scientific realms of computing”.

Valerie observed a split in computing during the 80s and 90s. She recalled the advent of the personal computer, at which point she was very much a part of the electronics domain, as opposed to the information domain.

Valerie said: “My interest has always been in making things work rather than processing the information. The two things have now come back together in full circle with IoT.”

The Internet of Things, of course, combines IT (information technology) with OT (operational technology), offering a good mix of the two disciplines. When Valerie founded AND Technology it was to make use of the new technologies that were arising at the time of its establishment: 1980. In particular, these technologies were microprocessors and microcontrollers. Along her business journey, Valerie prioritised the environment and other elements of ‘tech for good’

Valerie recalled her ever-changing role and title within the company. From Managing Director to CEO – before most recently stepping back to Founder as she passed along the reigns to her daughter.

Women see in a softer light

When asked whether they considered their focus on environmental initiatives as an ‘inherently female’ attribute, Nicola and Valerie agreed that it’s not so much a gendered issue as a diversity one.

Nicola expanded: “A lot of the people we work with on these initiatives come from a fairly diverse background. Inherently, you get more men because it’s a male-dominated industry anyway.” 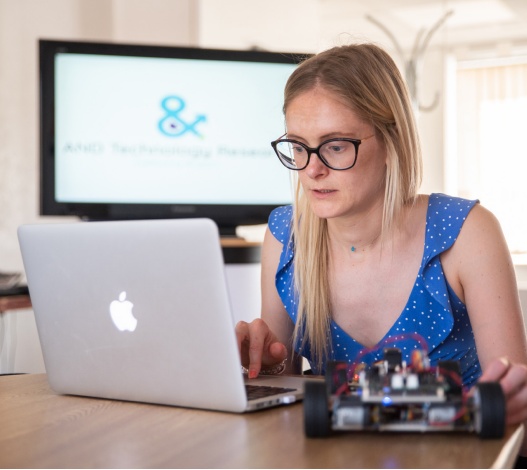 Valerie acknowledged that perhaps women do look upon things in a softer light than men, however. She said: “I think there is a slight difference when people are discussing business cases. Over the years I’ve noticed that the male perspective is very much driven by the bottom line. The female perspective tends to look further – at the wider picture. More holistically.

"I don’t see value in terms of pounds: I think of it in terms of its worth to us as a society. I think that view is more prevalent in women than in men. On the other hand, when you get a passionate man, there is no stopping him.”

Nicola admitted that she considers gender when hiring, but only in her attempts to ensure diversity. “A diverse set of people leads to a diverse way of thinking. As engineers, that’s quite useful, so I try to hire people that are slightly different to others already within the company.” This stretches further than gender. Nicola considers achievements based on where people have come from. She elaborated: “There are men who might have come from more deprived backgrounds, their grades might not be as good. 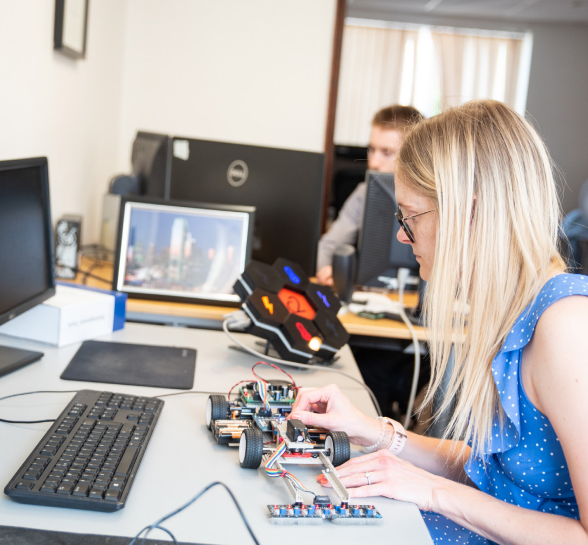 "I take in everything about that person rather than just a piece of paper.”

Further to this, both Nicola and Valerie recognised the importance of hiring well-rounded thinkers – with a focus on putting experience over degrees. In order to widen the pipeline, they broadened their candidate pool and embraced employees from other industries and sectors. They like to encourage people who have Arts degrees because their transferable skills entwine perfectly with the tech industry, which is very creative.

Nicola continued: “We have people who have degrees in journalism because they can convey product descriptions and write well. “We also had a test engineer who did a Journalism degree. She’d never done any sort of formal electronics or software training but she asks really probing questions to engineers which is what you need in someone who’s trying to test them. She went and did her testing qualifications and is now a certified test engineer.”

How can we equip the next generation of engineers with a diverse set of skills?

Valerie believes that apprenticeships will help to upskill. She noted that this is applicable not only to teenagers and young adults but people later in life who may be looking to change their career path.

As it stands, both women noted the difficulty that smaller businesses undergo in offering apprenticeship programmes. Nicola explained: “With the increasing cost of university, I think it puts a lot of people off. I see a lot of people who are given opportunities where they don’t have to tie themselves to three-year commitments and lots of debt.

“It’s a real barrier for people actually seeing whether they even like the job. If there was a simpler way that we could take on apprentices, we would do that more. Accessing funding and training is quite difficult and can be very taxing.

“Even if you obtain the funding, where do you send them with opportunities in training? Marrying these two principles is a lot of work. We do offer it, but we tend to take the view that we’ll train internally rather than suggest a government-funded apprenticeship.”

Valerie concluded the discussion with her thoughts on apprenticeships. “There’s a certain crossover between government, the colleges, and the employers who find them. I have tried to find ways that we could engage as a small company but the schemes available are very much linked to big companies. “At one point, Essex County Council actually gave us the money to train someone because I went on at them so much! But it probably cost me more in time than I got in funding.”

Accessibility to the tech industry is obviously a factor that needs to be addressed when considering issues of diversity within sectors. Perhaps if both students and older generations become acquainted with cheaper and shorter routes into engineering, there will be a notable shift in uptake