The week the IoT grew up

This may sound sacrosanct, but is it possible that the hype around the Internet of Things (IoT) has hit the yawn factor? As the most trendy tech phrase around, it had been adopted by all who connected their products or services in any way.

However, familiarity breeds (perhaps not contempt in this case) but at best a certain ‘we-have-heard-it-all-before’ feeling, and yet we know the IoT is set to be massive, and that market watchers are competing as to who can predict the most millions of connected devices in a given time period - We get it.

This conflict was well reflected at this year’s electronica in Munich. Though some were still sticking IoT on everything they could think of, most were taking a more mature stance.

“You have everyone talking about the IoT, but there is no real product or industry that is the IoT,” said Kevin Hess, Senior Vice President at Mouser Electronics. “What you have are elements such as sensors, microcontrollers, modules and so on.” 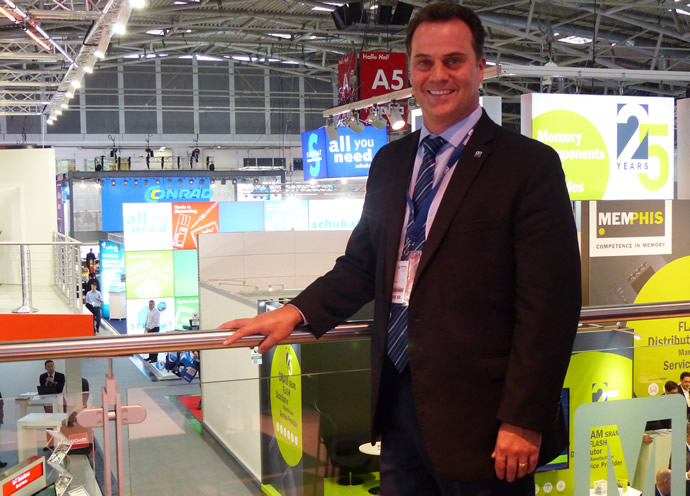 Above: Kevin Hess, Mouser: “To have a true global IoT, there is a lot that needs to happen first.”

While the sensor market was growing and people were doing more to make microcontrollers lower power, the clearest indication of the way the market was going, he said, was the increase in the number of companies coming out with development tools and modules to help people go into production.

One of the big areas, he said, was personal health with medical equipment gathering data and feeding them into a united platform.

“It is also about a better way of living,” Hess said. “It is about being safer on transportation. In agriculture, it will help people know what and when to plant.”

Security
This is a connected world - that’s a fact. But, and it is a big but, there are a lot of unscrupulous people out there and the more connected we become, the more openings are created for those nasties to infiltrate our networks and create havoc.

And so, this year’s show probably marked the point where the industry decided to grow up, to realise that if there is a fortune to be made out of the IoT it has to start taking security seriously. 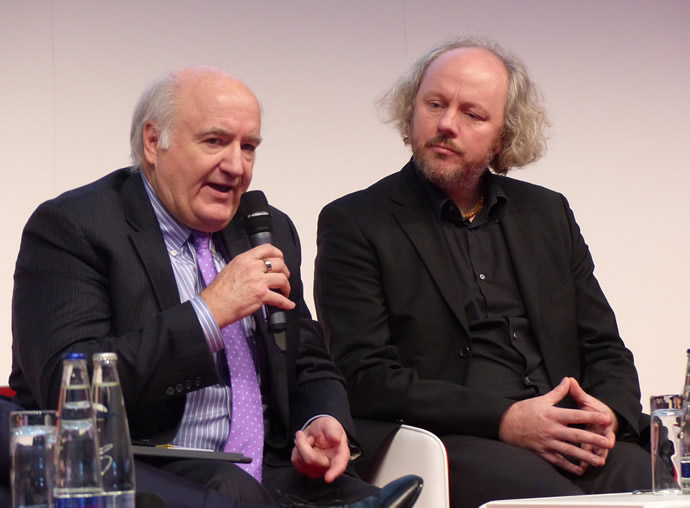 However, Frank Fitzek from Deutsche Telekom said it was the connectivity itself that would provide that security. “If you play it right, connectivity will be the enabler of safety and security,” he said. “The enemies started being just school kids hacking into systems for a bit of fun. But now even states are doing it. And the networks themselves make mistakes. So it is not just third parties that want to attack us but the technology itself. This means you need to monitor the networks and that can only be done with a holistic approach.”

Rick Clemmer, NXP’s CEO, said one of the problems with the internet was that security was an afterthought. “It was not designed into the internet,” he said. “But there are different drivers. In Europe, it is about protecting your information. In the US, it is about protection from being hacked. Europe is concerned about privacy. In China, the state can dictate what can be done. There are cultural differences around the world.”

Standards bodies too are seeing security as key. For example, Tobin Richardson (bottom image), Zigbee Alliance President and CEO, said: “There will be billions of devices connected to trillions of sensors, but that has to be done in a meaningful way. Security is one of the areas that is driving this. But there are roadblocks, such as standards. And we don’t want to have to download the Oxford Dictionary for every lightbulb.” 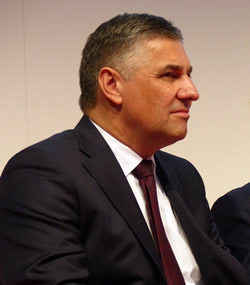 And Axel Sikora (below left) from Offenburg University added: “Security is a precondition for safety. The world is changing. A few years ago nobody was really interested in security. Now companies say they can’t sell their products any more unless they are secure.”

Hess agreed, saying that security was “a huge issue” and that there were problems with everything not using the same protocol.

“But if it is open source, everyone can figure out a way to get in and get access to the data,” he said. “This has to be sorted through the hardware and the software. We are moving away from the IoT. It is fun to talk about, but we have to figure out these things first.”

“To have a true global IoT, there is a lot that needs to happen first,” he said. “It is a mess at the moment.”

However, he said Industry 4.0 would be easier to implement as it was just machines talking to machines.

“Here you can have one protocol for connectivity as you are keeping it confined within your factory,” he said. 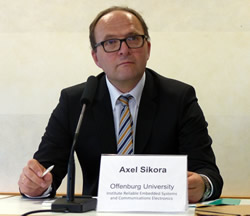 Another problem that needs addressing is power consumption and provision.

“You can’t have an electric outlet in the middle of a field for something that collects data,” said Hess. “There are so many things that need to be resolved to have a smart industry.”

One area that Hess is optimistic about is the move towards autonomous vehicles.

“Cars will drive themselves within ten years,” he said. “Again, this will be about sensors and processors, but the biggest challenge is the artificial intelligence. We have the parts but we don’t have the software.” 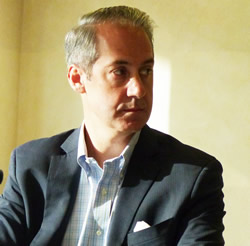 And so that was electronica, still the world’s largest electronics trade fair, which this year attracted around 73,000 visitors from more than 80 countries. They came for answers to design problems, to meet friends old and new, to keep up to date with the latest trends, and, yes, to find out about the IoT.

What they probably discovered was that whereas two years ago the IoT was all about hype, this year it was more serious. The big predictions are still around, though some are being a little more cautious now, but most of the talk was about the real issues that need to be addressed if the IoT is really to become the next big technical revolution.

After the recent hacking scares and security breaches, it should have been no surprise that safety and security were top of the agenda. These are no longer difficulties that can be looked at another day but need serious thought now. Thankfully, from the evidence at electronica, that thinking has started happening in a big way.