A wide spectrum of power electronics, cooling systems and integrated power solutions capable of optimising performance and energy savings in industrial, automotive, medical, and telecom applications were on show from Delta at electronica this year. Delta with its subsidiaries Cyntec and Eltek presented a number of products and highlights; however the superiority from Delta was reflected by its Telecom Power Solutions featuring best-in-class 56.8W/in³ power density, with 98% energy efficiency.

Jackie Chang, President and General Manager for Delta in Europe, Middle East and Africa (EMEA) said: “Delta´s core competence of delivering industry-leading energy efficiency is based on its long-term focus in R&D-based innovation and commitment to a low-carbon world. A testament of such endeavour is the official launch, here at Electronica 2016, of our new telecom power rectifiers offering impressive efficiency at up to 98%.”

The APB function detects a faulty current path within a multiple loads connection and in turn trips the circuit breaker connected to that path, ensuring other connected loads can continue operations without interruption. 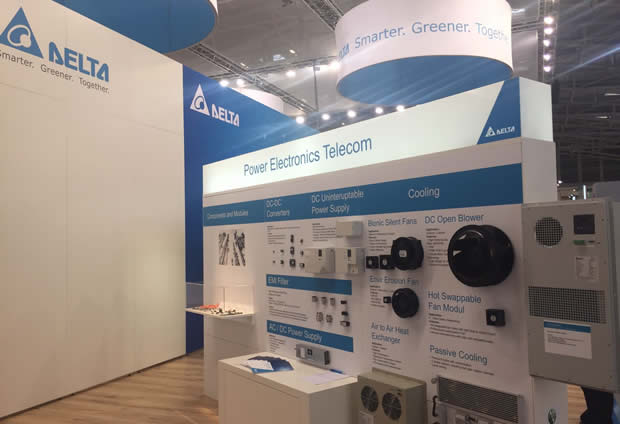 The heat exchangers and thermoelectric coolers also operate with excellent low-noise properties, in some models as low as 54db-A.  Delta´s cabinet air conditioners utilise variable-speed DC inverter compressor and dual rotor design to achieve a coefficient of performance (COP) of up to 4.5, meaning significantly lower energy consumption in the cooling process.

Uninterruptible Power Supply (UPS) Systems
Delta´s 3-phase modular Modulon DPH series UPS system, designed for better flexibility and strong performance with 96% AC/AC efficiency is an option for medium-sized data centres. While 75kW Modulon systems were on display at the show, its power rating goes up to 200kW. Other UPS systems for IT, industrial and retail applications were part of Delta´s proposition at electronica.