Home > News & Analysis > Where did I put that speaker?
Blog

Where did I put that speaker?

Steve Rogerson looks at some of the recent news that may have missed the front page.

To lose one speaker is bad luck, but to lose two, especially right after each other? Well, that is what happened at the recent IDTechEx Show in Berlin during the connected vehicles session. To make matters worse, there were only three speakers scheduled so when Panasonic Automotive and Huawei both failed to show, it was left to Andrew Frame from ARM to carry out the session, and he was a last minute replacement and didn’t talk about connected vehicles at all.

There is a lot of fuss about smart meters as roll-outs are planned, started and, in some cases, completed. There have also been people, notably in the US, who have been taking utilities to court to stop them forcing smart meters on them.

OK, many of these are cranks, but let’s be clear, the main people who will benefit from smart meters are not the consumers but the utilities themselves as they will save a fortune on meter reading. The advantages to you and me are marginal - if they exist at all - though it will save me going down to the cellar with a torch to check my meter readings. However, what I ask is for the utilities to be honest and admit that it is they who will reap the benefits and not us. I’m not holding my breath. 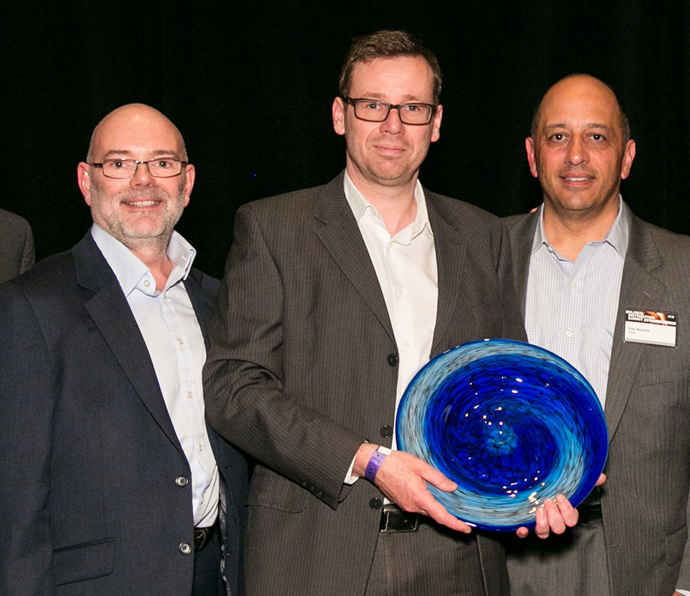 Above: these people appear to have won the Swirly Thing in Space Award judging by the trophy that Luke Smith from Avnet Abacus is holding. Maybe they boldly went where nobody has gone before. Possibly, as whatever they did worked because the company landed TE Connectivity’s European Distributor of the Year Award, and not a Klingon in sight

I have always been a bit (sometimes a lot) of a comic fan, and Marvel was so much better than DC, so I was quite pleased to receive a press release from Mouser saying it had teamed up with Marvel to launch a video series to educate future engineers. However, what will it be teaching them, I wondered. Are we going to see engineers crawling across the ceiling to get to hard to reach places or producing fire from their fingertips when a bit of soldering needs doing? What is for certain, is that it might be risky business to annoy them!

Infineon has been bragging about its eight inches, but before you start sniggering, that is the size of the sensor chips it has delivered to CERN to help scientists prove the existence of dark matter. I was more worried though about the company’s maths, as the press release said “eight inches or 15cm x 10cm”. Apart from the mistake of converting a length into an area, by my calculations eight inches equals 20.48cm.

In case you missed it, US President Barack Obama visited this year’s Hannover Messe and I received press releases from the likes of Rittal, Harting and others with pictures of the man on their stands. If the worse comes to the worse in the US election later this year, I wonder if they will be as quick to show their association with Donald Trump. Somehow, I think not.