There are many different wireless standards and protocols in use today, and it can be difficult to choose the right technology for any particular application. In this article, we will look at some of the key criteria to consider, and review four popular options: WiFi technology, Bluetooth Low Energy technology, Proprietary RF, and the Green Power protocol from the Connectivity Standards Alliance.

There are many different considerations to take into account when selecting a wireless technology. These considerations are often inter-dependent because there are inherit trade-offs involved.  Fortunately, since most of the technologies are standards based and designed for particular applications and eco-systems, many trade-offs are already optimized for particular use cases and interoperability.

In the contrasting case of a proprietary protocol, the main advantage is that you can further optimize the wireless protocol since interoperability with an external eco-system is not required.  Protocol overhead and airtime can be minimised to the specific requirements of the application.  Proprietary provides the greatest flexibility and is normally the lowest cost and lowest power solution available.

In the next section, we will break down each consideration and discuss interdependencies between the others.

WiFi, Bluetooth Low Energy (Bluetooth LE), and Zigbee (IEEE 802.15.4) technologies use unlicensed spectrum in the 2.4 GHz band.  2.4 GHz is a worldwide-unlicensed band that, along with the proliferation of cellular phones with integrated WiFi and Bluetooth LE, has essentially standardised the usage of 2.4 GHz.

In addition to 2.4 GHz, newer generation WiFi also uses 5 GHz to help alleviate congestion and to provide more bandwidth.  The FCC in the United States has recently opened up another band near 6 GHz with even more bandwidth. Other regions around the world are following suit and 6 GHz will likely become a global standard. 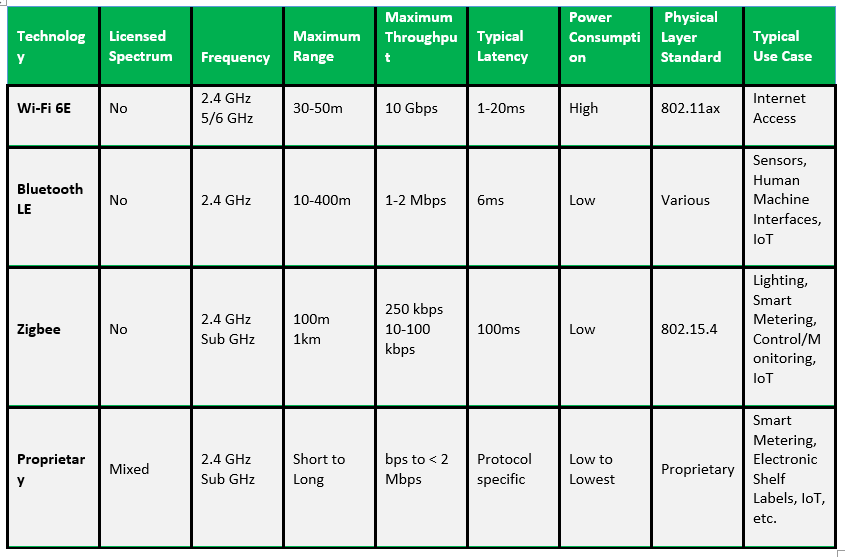 There are regional Sub GHz bands available for unlicensed use, but unfortunately, there is not a global frequency standard.  Common frequencies are 433 MHz in several countries, 915 MHz in the U.S., and 868 MHz in Europe.  As a result, solutions providers need to have separate regional SKUs.  This is the primary disadvantage of Sub GHz.  However, many radio chip providers like ON Semiconductor support a common hardware design with minor BOM changes for the different regions so the differences are often minimal.

As a brief side note, Zigbee technology does also support operation in Sub GHz bands, but 2.4 GHz is more prevalent today.  The main exception is the U.K. where Zigbee Sub-GHz is used for smart metering.

WiFi, Bluetooth LE, and Zigbee/802.15.4 already have their protocol’s physical properties tuned for their intended use case.  However understanding transmit power, environmental parameters and how they impact the wireless signal, antenna parameters, and the sensitivity of the receiver and it’s robustness to interferers are still the system designers responsibility.

The communication range is inversely proportional to the frequency band.  An approximate rule of thumb is that when the frequency doubles the range halves.  Increasing the output power can help extend range but eventually this becomes unpractical.  Fundamentally, there is a limit to how much adding output power will help.

Another parameter that limits range is data rate.  As you try to send data at higher and higher data rates, it is harder to receive.  An easy way to think about this is when you try to tell someone something while speaking quickly. If they do not understand you, speaking louder will not help the listener.  This is the basic premise behind information theory in communications.

As frequencies and data rates increase, protocols must implement something called Multiple Input and Multiple Output, or MIMO.  At a basic level, this is just splitting the information into parallel messages allowing more information to transfer per unit time.  In other words, by sending parallel data streams more data can be sent at the same time, effectively increasing the data rate without reducing range.  The MIMO order is the number of parallel channels.

For example, a 4x4 MIMO means there are four transmitters and four receivers.  This trade-off between data rate and distance is one of the big reasons why 5G deployments require so many more towers.  The 5G speeds are much higher than 4G, and more base stations with MIMO are required to complete the network and to provide the level of performance required.

Proprietary protocol specifics are limited by the regulatory limits set by the government’s legal restrictions for the selected band.  For example, in the EU 868 MHz band, output power is limited to +14 dBm.  There are many tuneable protocol parameters such as:

This list is not comprehensive but are some of the parameters involved in designing a proprietary protocol.  Because of all the fine-tuning that is possible, proprietary is one of the best ways to minimise power consumption since all parameters are tunable.

To mesh or not to mesh, that is the question.  This age-old conversation brings out strong opinions in many engineers.  There are some inescapable realities associated with mesh networks that must be considered before deciding.  For the moment, let us consider just Bluetooth LE and Zigbee technologies, which both have mesh capabilities.

Bluetooth LE is by definition a short-range point-to-point network, and that is how it is commonly used.  However, over the last several years, the Bluetooth SIG has defined a mesh protocol and it is gaining traction in the smart lighting industry.  It is popular in part because of the convenience associated with being able to communicate directly with a cell phone and most gateways.

However, mesh networks should only be used when their benefits are required for a particular use case.  For example, in a factory or industrial setting, a mesh network is very desirable because more nodes are connected to each other and the benefits of increased reliability and lack of a single point of failure are demanded.  While this is a great benefit, it comes at the cost of power consumption since router nodes must be powered all the time.  Another cost is latency.  Since messages are going through multiple nodes, sometimes referred to as hops, the latency can add up.  In an application that requires real time data, this may become a problem.

Another less obvious benefit of meshing is that it increases the range of a network.  Since the range is no longer constrained by a point-to-point (P2P) connection, the mesh can be scaled up to much larger distances than a single P2P connection would work for.  The cost is again the latency, but also each router node requires software that is more complicated and larger memories to store not only the stack but also the routing table of the network, which increases cost.

When feasible, a star network (point to multi-point) is usually the most economical.  A Sub GHz star network has longer range and can often be a more economical solution as compared to a short-range protocol mesh.  However, the cost is some loss of robustness since there is only one routing path from an end node to the coordinator.

Bringing WiFi back to the discussion: WiFi is a little bit different because it has high speeds and good range, but is traditionally a star network (P2P).  Part of the reason for longer range is because the transmit power of WiFi networks is typically around +30 dBm (1 Watt) so the range is longer.  A typical Bluetooth LE or Zigbee radio transmits between 0 and +8 dBm, sometimes up to +20 dBm but this is less common except for gateways.  Without mesh, Bluetooth LE is typically limited to around 10 meters and Zigbee technology is limited to about 100 meters.

It’s also worth mentioning that with the addition of 5 GHz and 6 GHz bands to WiFi the range is reduced.  To continue to provide great quality of service, mesh networking is being added to WiFi to counteract this effect.  The WiFi mesh certification program, called EasyMesh, guarantees that WiFi nodes and controllers from different vendors can interoperate and coordinate to maintain uniform and efficient coverage.

Part two of this article series will examine other considerations for selecting the right wireless technology for your design, including power consumption, coexistence and security.