Liquid measurements from water to blood

The determination of the composition and quality of liquids is essential in a wide variety of applications. The most prominent example is water, the most precious raw material in the world. Clean water and water filter technology play important roles around the world and are necessary to life. Access to continuously declining clean water resources is a increasingly important topic.

However, examples of liquid measurements extend far beyond water - fluids in medicine such as blood, saliva, and faecal matter must be able to be tested for possible diseases because they have a direct impact on health. What all these measurements have in common is the underlying measurement principle - an impedance measurement.

The most widely known fluid measurement in medicine is blood glucose measurement. Here, a drop of blood on a test strip is sufficient for drawing conclusions about the blood sugar level in the blood. Based on this value, the patient can adjust his or her medication or diet. In the future, development should move away from the individual measurement and toward a continuous measurement method for constantly monitoring the blood sugar level. Highly accurate, power saving impedance measurements are urgently needed here. Above: Figure 1. Measurement principle for a potentiostat measurement

Another application of fluid measurement is dialysis. With chronic renal failure, the blood has to be filtered. The dialysis fluid conductivity measurement is also done via impedance analysis. In this way, for example, pH, conductivity, composition, and saturation can be measured.

Finally, faeces and urine from patients are also measured. Here, the bodily excretions are investigated for the purposes of drawing conclusions about diseases and irregularities. This is a relatively new field in medicine with numerous different approaches and a wide variety of methods.

However, at the foundation is impedance measurement via electrodes, which enables conclusions about various diseases to be drawn. Here, for example, in addition to the pH measurement, conductivity measurements are performed.

The measurements previously described are, of course, not exhaustive. There are still many more fluid measurements that are of use for medical technology for humans and animals, for example, hormone measurements or measurements of pharmaceutical agents. Here, too, an impedance method is important. 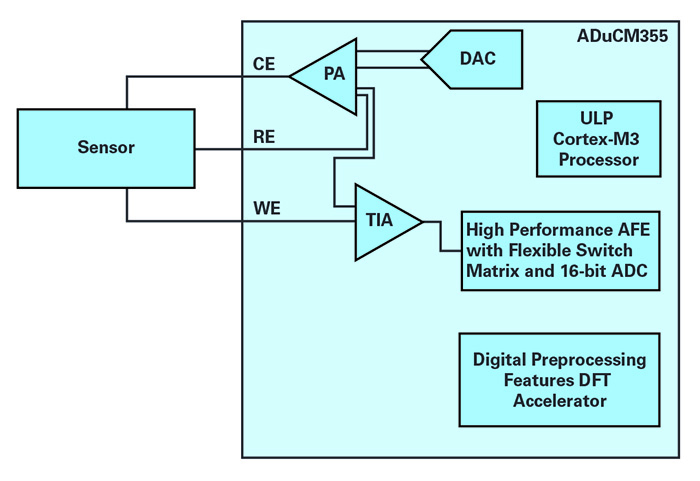 Although all measurements determine different parameters, they are always based on impedance analysis. Despite their many faces, they all have one thing in common - the need for a power and space saving solution for supporting wearable devices is huge. In the following, different impedance measurement methods are described. They are used partly in combination and partly on an individual basis to enable complete analysis.

Amperometric: The simplest form of amperometric measurement applies a bias voltage to the sensor and measures the response current. Here, a constant voltage is applied between the RE and the WE and the current profile is converted to a digital signal using a current-to-voltage converter and an analogue-to-digital converter (ADC). This current profile depends on both the sensor and the measured variable. The circuit is illustrated in Figure 2 by means of the ADuCM355.

Cyclic voltammetry: Voltammetry measurements function electrochemically, whereby the potential of an electrochemical cell is slowly increased and then linearly decreased. Thus, the potential follows a triangular waveform while the current flowing through the WE is measured. Voltammetry is used, for example, to measure the half-cell reactivity of an analyte. This method is a form of electrolysis, and the resulting current is a result of reduction and oxidation. With it, the sample can be investigated qualitatively and quantitatively.

Conductivity measurement: Conductivity measurements are based on the determination of the ohmic resistance in a liquid. To achieve this measurement, two inert electrodes, placed parallel to each other, are immersed into the liquid to measure the resistance using AC. Through this process, the mobility, particle density, and oxidation state of the electrolyte can now be estimated so as to allow conclusions to be made about the concentration of the solution.

pH measurement: pH measurement is based on the principle of a half-cell reaction, which takes place on the electrode membrane and has a direct dependence on the H+ ion concentration. From this potential difference results a voltage, which has a linear relationship with the pH value. One major problem of pH measurement is that pH sensors have a very high series resistance, which places high demands on the analysis electronics.

Electrochemical impedance analysis: Electrochemical impedance analysis is a measurement in which the impedance of the electrochemical cell or the sensor is measured over an entire series of different frequencies. By means of the changing impedance over the different frequencies, the wear of the sensor can be measured and the signal chain accordingly automatically adapted. The decrease in sensor accuracy over time (a few days to weeks) is problematic here. This can negatively affect the overall accuracy of the various measurements. This is the case, for instance, with continuous glucose measurement (CGM). Because the measurements are critical to health, the accuracy of the sensor must be continuously checked. An example circuit can be seen in Figure 3. 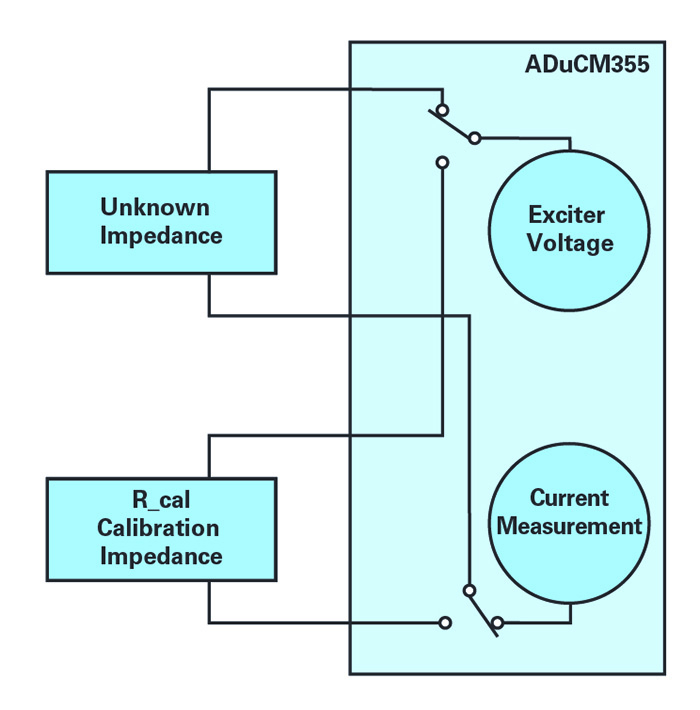 The previously described medical measurements differ greatly in terms of requirements and parameters, and thus the respectively used measurement methods. Besides that, a temperature measurement for compensation must additionally be performed to enable temperature calibration. Multiple sensors must be used in part for complementing or increasing the accuracy. In a discrete design, all of these measurements require a large circuit board area and have a high power consumption.

These days, especially in medical technology, small, power saving, and low cost solutions are being sought so that they can be inserted into wearable and usable devices. ADI developed the ADuCM355 for exactly these design challenges.

One solution that can unite all measurements is the ADuCM355. This integrated chip is composed of a power saving analogue front end (AFE) and a microcontroller that assumes the housekeeping and security functions such as the cyclic redundancy check (CRC). A block diagram with the key components of the ADuCM355 is shown in Figure 4.

It controls electrochemical and biological sensors with a low power consumption. The ARM Cortex-M3 processor technology-based chip has current, voltage, and resistance measurements. It has, in addition to a 16-bit, 400kSPS multichannel, SAR ADC with input buffers, an integrated antialiasing filter (AAF), and programmable gain amplifier (PGA). 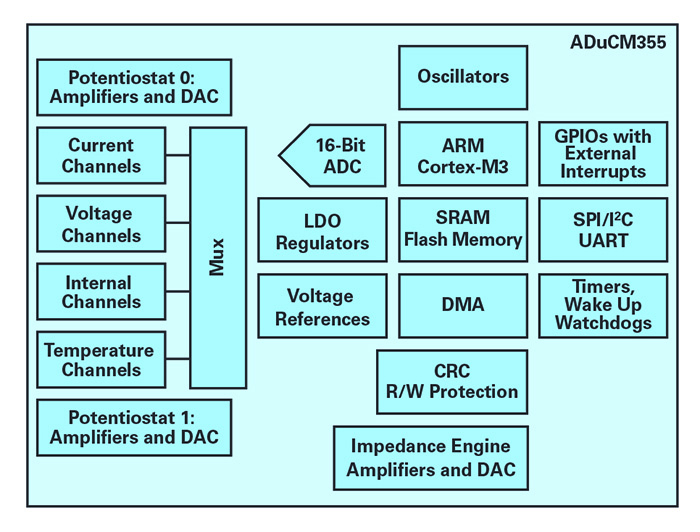 Above: Figure 4. Block diagram of the ADuCM355

The transimpedance amplifier (TIA) in the current inputs have programmable gain and load resistors to accommodate different sensor types. The AFE also contains amplifiers that were specifically developed for the potentiostat for maintaining a constant bias voltage with respect to an external electrochemical sensor. The respective input channel can be selected via an input mux upstream of the ADC. These input channels include three external current inputs, several external voltage inputs, and internal channels. Two of the three voltage DACs are dual-output DACs. The first output on the DAC controls the non-inverting input of a potentiostat amplifier, whereas the other controls the non-inverting input of the TIA.

The third DAC (sometimes referred to as a high speed DAC) is designed for the high performance TIA for impedance measurements. The output frequency range of this DAC is up to 200kHz. The ARM Cortex-M3 processor also has a flexible multichannel direct memory access (DMA) controller, which supports two independent serial peripheral interface (SPI) ports, a universal asynchronous receiver/transmitter (UART), and an I2C communication peripheral. A series of communication peripherals can be configured for specific applications as required. These peripherals include UART, I2C, two SPI ports, and general purpose input/output (GPIO) ports. The GPIOs can be combined with the universal timers to form a pulse width modulated (PWM) output.

Apart from the measurements previously described, measurement of the temperature is necessary so that the fluctuations of the sensor can be compensated for. The extended measurement principle is shown in Figure 5. By means of the larger signal chain, the ADuCM355 can read out both voltage and current. With the circuit shown, impedances in the range of less than 100Ω to 10MΩ can be detected. The large measuring range enables coverage of the complete impedance spectrum required in medicine. A high dynamic range is especially important for conductivity measurements so that various concentrations can be measured. 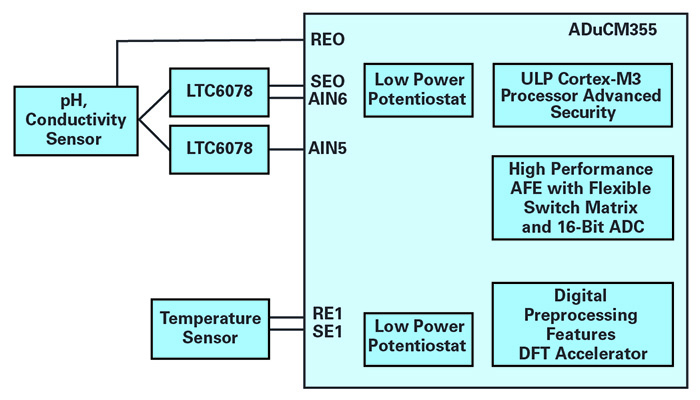 Above: Figure 5. Circuit for pH, temperature, and conductivity measurements with the ADuCM355

While the measurements for diverse liquids have impedance measurement as the underlying principle, they still differ from one another.

For example, different sensors must be connected to record different parameters. To cover this versatility on one hand and accommodate the growing trend toward small, power-saving devices on the other hand, a smart solution is urgently needed. The ADuCM355 not only meets all these requirements but also takes on its role as a Swiss army knife for impedance measurements in medicine. This IC, in fact, enables, in addition to fluid measurements, other impedance measurements in medicine, for example, body fat analysis or skin impedance. In addition, due to its versatility, it can also measure electrochemical gases such as CO or CO2 with the right sensors. This makes the ADuCM355 an all-in-one package for impedance measurements.