Device lets women do part of breast reconstruction at home

This might be the ultimate do-it-yourself project: Doctors are testing a device that would let women do part of their own breast reconstruction at home. It's aimed at not only making treatment more comfortable and convenient, but also giving women a sense of control—something cancer often takes away. More than 100,000 women each year in the United States have surgery to remove a cancerous breast, and many of them choose reconstruction with an implant.

To make room for a permanent one, many of them get a tissue expander, a temporary pouch that is gradually enlarged with saline to stretch the remaining skin and muscle. This means trips to the doctor every week or two for several months for injections of saline into the pouch, which can be a painful ordeal.

"We would put as much saline as we could until basically the patient would say, 'I can't stand it anymore,'" said Dr. Daniel Jacobs, a Kaiser Permanente plastic surgeon in San Jose, California.

While biking home one day, Jacobs had an idea: Why couldn't a tiny can of compressed gas, like the one he carries to fix a flat tire, be used to let women inflate their own tissue expanders, a little each day so there is less stretching at a time and less pain?

He helped found a company—AirXpanders Inc. of Palo Alto, California—to develop the device, called AeroForm. It's sold in Australia, approved in Europe and under review by the U.S. Food and Drug Administration. 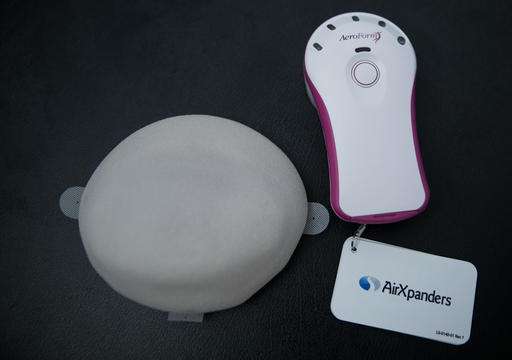 Photo shows the AeroForm tissue expander, left, and handheld dosage controller at the NewYork-Presbyterian/Columbia University Medical Center. Doctors are testing the device that would let women contribute to the breast reconstruction process at home. It is aimed at not only making treatment more comfortable and convenient, but also giving women a sense of control—something cancer often takes away. (AP Photo/Mary Altaffer)

Its use requires no special training, wires or tubes—just a palm-sized remote control that activates a tiny cartridge inside the pouch to pump gas, up to three times a day according to how the woman feels.

In a company-sponsored study of 150 women, AeroForm patients finished tissue expansion in half the time and were able to get implants a month sooner than others who had the usual saline treatments, said the study leader, Dr. Jeffrey Ascherman, a plastic surgeon at Columbia University Presbyterian Medical Center in New York.

"My patients love it," he said. When some women who agreed to be in the study learned they had been assigned to get the saline device for comparison, "I had one who started crying, and other women said, 'please Dr. Ascherman, can't you change it?'" he said.

There was no difference in rates of side-effects such as infections, but seven of the air expanders malfunctioned versus only one saline one, Ascherman said. The device was tweaked to fix the problem, he said.

"It's a really interesting concept," said one outside expert, Dr. Deanna Attai, a University of California at Los Angeles surgeon who is a past president of the American Society of Breast Surgeons.

"Giving the patient a sense of control is very psychologically important," because many women feel robbed of that, Attai said. "To a patient that's going through cancer treatment that could be a big deal."

Dr. Susan E. Downey, a Los Angeles plastic surgeon who used the AeroForm on two patients in the study, said: "I think it will make life easier for a lot of people." It did for 35-year-old Luincys Fernandez, a high school chemistry teacher who lives in Bogota, New Jersey, and teaches in New York. She was diagnosed with breast cancer a year ago, when pregnant with her second son, and used the AeroForm as part of the study.

"I really, really liked it," she said. She carried the remote control in her purse and completed the tissue expansion in just 18 days. "It did not interrupt any of my daily activities. I could go back to normal. I could see the results right away and I could see where I wanted it to go" in terms of size and appearance, she said.

The device comes in three sizes. Women can choose the amount of inflation up to a point, limited by how much tissue is left and how far the device can expand. Once fully expanded, the device is removed and replaced with a breast implant.

In Australia, AeroForm costs more than saline expanders but requires fewer office visits, so costs are not directly comparable. In the U.S., tissue expansion generally is reimbursed at a flat rate that is part of breast reconstruction, and AeroForm's impact on this cost—if the device wins FDA approval—is not clear.