Home > Industries > What role should the defence industry play in academia?
Aerospace & Defence

What role should the defence industry play in academia?

Air Commodore Dave Tait, in charge of recruitment for the UK Ministry of Defence, hosted a panel discussion at DSEI 2021 which addressed the challenges currently faced by the defence industry in both recruiting and retaining engineers.

Engineer recruitment to military operations is becoming increasingly fraught with difficulties, some of which root themselves in a lack of primary engagement from young children with STEM subjects, others arising in the latter stages of education. Tait, head of training, education, skills, recruiting and retention for the Ministry of Defence, invited his panellists to offer their perspectives on the reasons behind and solutions to the stunted growth of military engineers.

The panel collectively agreed that a synthesis of industry and academia is now of paramount importance. Military establishments have long since been held as traditional institutions, which are resistant to change. The modernising of its recruitment measures and collaboration with academia marks a proactive and pragmatic shift in conventional attitudes. Such a move away from rigid career structures sees students finding themselves less restricted to specialist roles, instead fostering a culture of interdisciplinarity.

In this ever-evolving world of technology, it is clear that the delineation of specialist tracks is no longer useful in creating a new generation of problem-solvers. Instead, Tait argued that a blurring of skills will create greater flexibility, thus widening the pipeline and delivering a larger, and in turn, more diverse, pool of potential candidates.

This article shares three of the panellists’ perspectives surrounding military engineer recruitment, and the role that academia should play in industry. 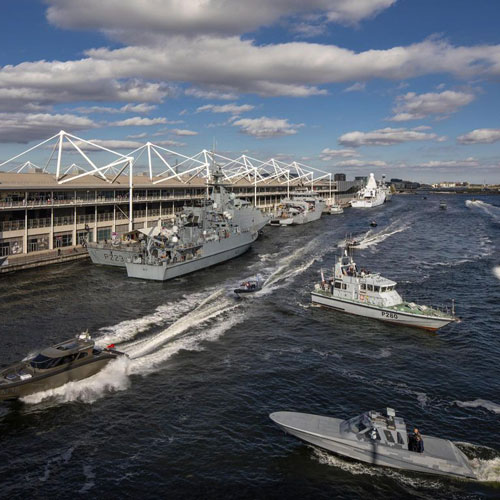 Ms Lynette Ryals OBE, pro-vice chancellor of Cranfield University and chief executive of Milton Keynes University (MK:U), summarised the approach from her universities as “attractive, affordable and accessible.” In 2017, Cranfield, a post-graduate research university, specialising in STEM subjects, partnered with MK:U, an also STEM-focused but undergraduate university which has plans to open in 2023.

Ryals expanded on the new approach that MK:U will be taking, placing a stronger emphasis on degrees that have their fees paid for by employers’ apprenticeship levy. This benefits the student in obvious ways such as not racking up thousands of pounds worth of debt, but also through MK:U’s push towards “problem-based learning” in which companies from industry are invited to help build the course syllabuses around relevant issues.

Ryals also noted that they will be using “authentic assessment” to replace traditional exams with more accurate measures of ability such as presentations. The new methods are thought to better prepare students for industry, alongside a fresh impetus on the development of soft skills in learning. Ryals said that MK:U is building a “single source of professional, commercial and interpersonal skills training that genuinely equips the engineers of the future.”

Professor Mini C. Saaj, professor and global chair in Robotic Engineering, University of Lincoln, shared a similar line of thought in the ways in which universities can be creating more transferable skillsets for students. Academic projects should be industry-driven and expansive, the curriculum needing to facilitate an “osmosis” across different engineering disciplinaries, said Saaj.

However, she noted that the crisis of engineer recruitment stems not only from the delivery of degree programmes, but down to a lower level of outreach to younger school children. Engineering as a career is often misconceived through overly convoluted job descriptions, and instead younger generations need to be exposed to the exciting opportunities it can offer in order to even widen the pipeline at university level.

Saaj explained the final level at which she believes that industry and academia can merge to produce the best outcome, focuses on those already employed by the defence enterprise. She talked of opportunities for placement exchanges in which academic staff undertake hands-on work, and defence workers can pursue research.

Saaj’s emphasis on the significance of outreach towards younger development is echoed by Group Captain Mark Butterworth, deputy head, Combat Air Strategy Team. He told the panel about a project he is working on which will reach capability in the mid-2030s, highlighting the fact that the pool of potential engineering apprentices for this time period are currently in Key Stage 1 and aged between five and seven years old.

The curriculum, even at this early stage, needs to be scrutinised and adapted in order for it to translate to impressionable children. Butterworth asked, ‘how do we harness that natural inquisitiveness and that natural disruptiveness and turn it into a career?’ He offered stories of his own daughter, who is in Year 2, but has been hugely exposed to technology in a way that previous generations were not. As such, he continued that digital utilisation needs to be more heavily incorporated into both education and training opportunities.

Butterworth also noted that the more senior roles for the next decade will likely be filled by the recent apprentices and graduates of today. Therefore, training for current employees needs to be constantly refreshed and up to date. Here is where technology has considerable potential to innovate training opportunities, using virtual reality to carry out unfamiliar procedures that people may have never carried out before, or not done for some time. Synthetic environments can pave the way for training, thus retention, but also as Saaj suggested, can be incorporated into lower levels of education to attract talent.

In summary, the conversation surrounding engineer recruitment is clearly at the forefront of the defence industry’s agenda. The panellists shared similar notions of how to rouse interest in military engineering from different stages of development, each offering their own niche spin depending on their background. It is apparent that initiatives are in place, and still being developed, to further the surge of younger people wanting to pursue engineering, particularly in the defence industry.