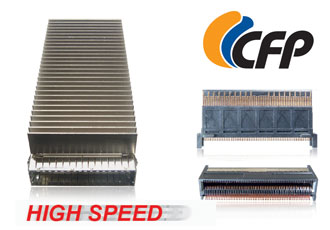 Yamaichi Electronics provides CFP high-speed connectors for hot-pluggable optical transceiver form factors to enable 100 and 400Gbps applications. Yamaichi Electronics has developed a new connector for the recent CFP8 specification for 400Gbps applications. It is compliant with the CFP MSA Multi-Source Agreement. The company claims that the CFP8 connector is one of the few connectors on the world market able to achieve the transmission rate of 400Gbps.

The final CFP8 specification was officially released from CFP MSA in March 2017. The CFP8 has the same size as the CFP2, but its performance is four times higher, achieving 400Gbps instead of 100Gbps. The CFP8 connector configurations supported are 25Gbps x 16 channels, 50Gbps x 8 channels, or 100Gbps x 4 channels.

The pin count is 124 pins. One of the most challenging achievements of Yamaichi Electronics was the narrow pitch of 0.5mm. The pitch of the CFP2 connector is 0.6mm. Even at 4 times the transmission speed of CFP2, the CFP8 connector excels through a smaller contact pitch.

Yamaichi Electronics has already launched a complete range of CFP, CFP2, CFP2 56Gbps and CFP4 connector systems based on the MSA specification and supporting major customers’ 100G applications. Now the CFP8 is in mass production at Yamaichi Electronics and fully available.

The CFP MSA has already started studying the next 400G form factor, CFP16. The details are currently under discussion.