Sensor network for the smart factory

Smart automation and digital transformation are among the trend topics worldwide. Industry 4.0 and the Industrial Internet of Things are changing production and logistics processes in the long term. In the future, objects will be networked and interact automatically in all areas. In order to guarantee smooth processes, detailed position and status data must be generated and analysed. KINEXON, located in Munich, Germany, has developed KINEXON Brain, an intelligent solution based on an IoT gateway from Kontron's KBox family.

Whirling robot arms that do their job automatically in production lines, driverless vehicles that curve through the aisles of high-bay warehouses as if by magic – this is no longer a fantasy in a smart factory. Automation at all levels is a cornerstone of modern industrial processes. Without highly developed electronics, tailor-made applications and the know-how of clever developers, such solutions would be unthinkable.

KINEXON Industries, founded in Munich in 2015, develops solutions that optimally implement the requirements of the Industrial Internet of Things (IIoT). The core business of the Munich-based technology forge is the development of precision location and motion sensors. The individual solutions are tailored to customer requirements and consist of hardware, firmware, software and the corresponding services. With its highly developed Sensor network technology, KINEXON enables inch-perfect positioning and motion detection of objects. With the help of an integrated analytical platform, the generated data can be converted into valuable insights – precise, scalable and intelligent. This increases process efficiency and makes industrial environments more intelligent.

Driverless transport is no sorcery
Automated guided vehicle systems (AGVs) are used today in various environments. For example, they transport boxes or other load carriers from a warehouse to a predetermined destination in a building or on a site. In order to master the route autonomously without a driver, the vehicle must be navigated. For this purpose, the current location of the automated guided vehicle (AGV) and the target destination are determined. To date, navigation systems have used ground markers such as colored or magnetic tape. An optical sensor in the AGV reads these out and follows the predefined routes. However, these types of navigation are inflexible, expensive and, due to the robust environment, usually relatively maintenance-intensive. Laser-based systems (SLAM algorithms) with spatial recognition also reach their limits in industrial settings.

The Munich specialists chose a different approach for KINEXON Brain. The solution offers sensor-based localisation that is independent of most environmental conditions prevailing in an environment. These can be floor pollution, disturbing light radiation or dust and vapors. KINEXON Brain merges several position sensors, enabling a much more accurate self-location. KINEXON’s solution is therefore predestined for installation in various vehicles, such as industrial trucks, AGVs and other vehicles used in general logistics or production companies. 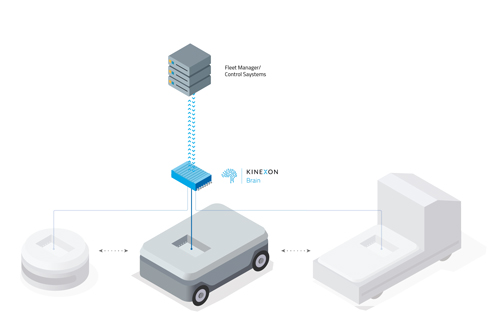 KINEXON Brain is based on software implemented on an IoT gateway of Kontron’s KBox A-Series. The solution consists of an embedded Box PC with IoT functionalities and the sensors for communication with the sensor network, the KINEXON Vehicle Tags. In addition, there is a fieldbus coupler for communication with external I/Os and other components connected to the gateway, such as motors, laser scanners or a safety controller. The KINEXON Brain installed on Kontron's KBox acts as a single interface to the hardware platform of the industrial truck. The advantages are obvious:

- The integration and fusion of different localisation technologies, such as SLAM and UWB (Ultra-Wideband) localisation, ensure maximum robustness and offer the customer a maximum of flexibility.

- The control of any kinematics and the smooth integration into the products of numerous different AGV manufacturers make it possible to realise a multitude of application scenarios.

- Embedding of manually operated devices’ and other vehicles’ position data allows a flexible and foresighted control with which logistics processes can be optimised.

Fast localisation and control
The system can be implemented on a large number of driverless vehicles to automatically control those. In a robust environment, the multimodal fusion of navigational sensor technologies enables rapid localisation and control of AGVs and autonomous service robots. Data required for localisation and navigation are generated in a dense network. It is based on the fusion of inertial sensors, laser data and the position information of the wireless KINEXON localisation system (KINEXON Sensor Network). KINEXON Brain automatically selects the best localisation information in each situation and combines it for accurate position estimation. KINEXON's wireless localisation technology delivers accurate position data even in the most challenging environments. If necessary, the local and relative position estimates of the vehicle-bound sensors can be corrected. This allows achieving a positioning accuracy of five centimeters and a course deviation of less than two degrees in almost all industrial environments.

Previously used navigation systems, for example on the basis of magnetic tape, required time-consuming mapping runs to measure the premises beforehand. The use of KINEXON wireless localisation makes these procedures superfluous. Driving routes and waypoints can be defined on an existing CAD layout and transferred to the control system. KINEXON’s Sensor network works with bi-directional communication and enables precise navigation via radio. In addition, the system can be used to simultaneously locate both person-controlled and automated guided vehicles. This increases flexibility and efficiency. In addition, the Sensor network can also be used for other applications as well, such as asset management, route optimisation of forklifts or the automation of manual processes.

Quality, service and flexibility decide
The decision to use Kontron's KBox for KINEXON Brain was made in early 2017 after a brief market survey and positive feedback from customers already using Kontron's solution. "Many of the solutions we looked at previously were significantly larger and heavier than the KBox and were using active cooling," explained Johannes Feldmaier, Product Manager AGV at KINEXON. "But this is not optimal for flat, autonomous industrial trucks, for example, because they move close to the ground. This results not least in a high dust content, which the systems have to cope with in order to provide precise data.”

"The Kontron products, in contrast, were convincing due to their compactness and robustness as well as their scalability and fanless operation, which even works at surrounding temperatures of up to 60°C thanks to good passive cooling. The housing of the KBox is much better crafted than comparable products. In addition, the arrangement of the interfaces is particularly practical. In addition to the price/performance ratio, the customer-oriented support and overall service have also convinced us.” 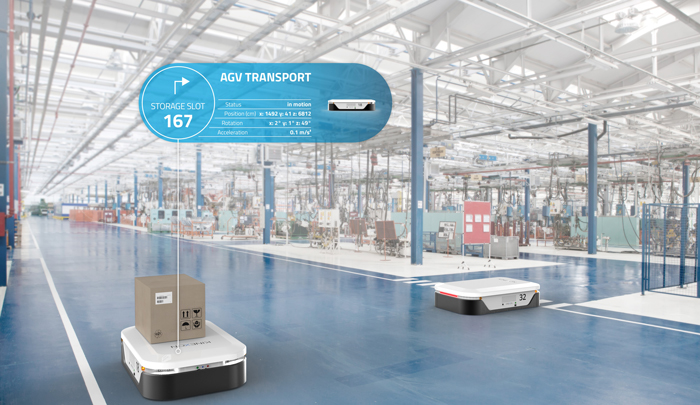 Kontron’s KBox offers KINEXON the necessary interfaces for its AGV solution and is also shock-resistant – an important criterion for use in a robust environment. The solution was also convincing because Kontron has all the necessary certifications and was able to present a fully tested system configuration. KINEXON also praises the cooperation during the project stages: "Interaction and consulting by the sales department, the support team and the after-sales support have been excellent", Johannes Feldmeier compliments the manufacturer.

Today, the KBox is an integral part of KINEXON Brain and functions within the solution as a control computer that merges the different sensor data of an AGV. The system reliably supplies all required data even in continuous operation as well as with limited cooling and contamination. Thanks to its compact design, Kontron's KBox is also suitable for integration into flat, autonomous industrial trucks. This is an important aspect, as the space available for such an AGV is very limited.

"By using Kontron's KBox, we have succeeded in implementing one of the leading AGVs solutions for use in industrial environments within a very short time," concluded Johannes Feldmaier. "Thanks to the offered standards, the scalability and the available interfaces, KINEXON Brain can be easily integrated into the products of various vehicle manufacturers. This allows a large number of applications in various fields of application, for example in the field of intralogistics or in the future also in the service robotics area.”