Steve Rogerson discusses whether LIDAR can continue its journey to become a sensor technology of choice for autonomous vehicles. LIDAR is not new. The light equivalent to RADAR uses pulsed laser beams and measures their reflections to determine the distance of objects, and it has been around since the 1960s. It was originally used for gathering information about clouds and shot to fame in 1971 when the Apollo 15 mission used it to map the surface of the moon.

Since then, it has been used primarily in mapping – including by the military from aeroplanes – but it has still kept its space credentials by being on a Mars landing to measure the stage of descent. Now it is in the news again as some proponents in the automotive industry see it as an essential sensor technology if the vision of autonomous vehicles is to become a reality. However, for that to happen there are still hurdles to overcome in terms of cost and technology.

“It was used on some of the early self-driving cars 15 years ago,” said Wade Appelman, Vice President of Sensl Technologies. “That was very expensive. It was done to prove a concept.”

To some extent, this is still the case. Whereas LIDAR is being used in research projects, the cost is still not valid for production, according to Henrik Clasen (left), Technical Manager at Delphi. “LIDAR has very high resolution,” he said. “In research, cost is often not an issue, but this is different when you transfer to production.” 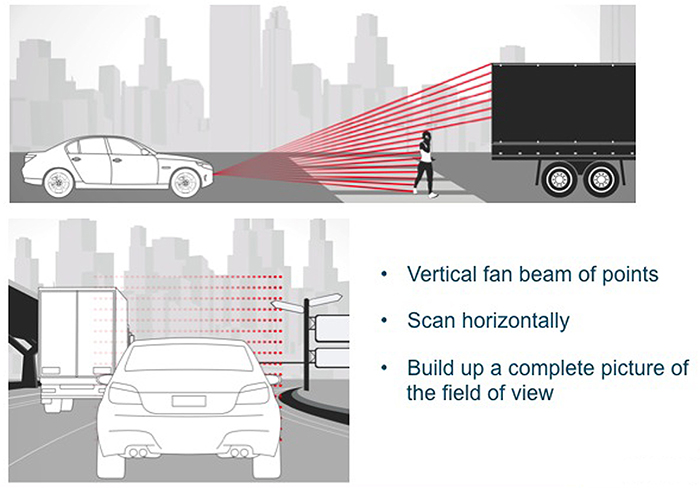 Above: How LIDAR scanning works

He said that LIDAR gave a “good view” of what was around the car. However, he said one of the benefits of the alternative radar was the micro-Doppler effect that showed up movement such as swinging arms and legs of pedestrians and wheels and pedal movements on bicycles.

“That helps in classification,” he said. “It is not enough to detect an object, you need to know what it is.”

Changes
However, there has been a change over the past ten to 15 years that has seen LIDAR start to become more cost effective than RADAR rather than the other way round. This is the belief of Hans Adlkofer (above), Vice President at Infineon. He said it would be essential for moving up to levels 3, 4 or 5 of autonomous driving. For example, LIDAR could help calculate the distance between two trailers to work out if it was safe for a car to drive between them.

However, he acknowledges that the learning curve that the world has already gone through with RADAR has still to happen for LIDAR. “LIDAR has proven itself in some special cases such as in production environments,” he said, “but it has not proven it can be cost effective and integrated.

Nobody wants a big piece of equipment on top of their car. It has to be integrated into the bumper or somewhere similar. It is not yet proven.”

One of the problems, he said, was that none of the different technologies were good for all circumstances.

“In fog, RADAR is the best and cameras are blind,” he said. “LIDAR is pretty good. If there is a lot of dust, the camera is pretty good. However, nothing can handle all environmental situations. LIDAR can work up to about 200m but it depends on the environment.”

This is because the further the distance, the more reflections that are lost. LIDAR is also not suitable for small distances - it is a mid-range technology.

Toposens specialises in 3D ultrasonics for handling such small distances in automatic parking applications and the like. “It is perfect for bringing these types of features to low cost cars,” he said.

Industrial applications
In parallel to its automotive development, LIDAR has also found applications in the industrial world, such as for creating a light curtain – known as 2D LIDAR as opposed to the 3D LIDAR that can map areas – that can stop a robot or piece of machinery if a human comes too close. Also in industrial, it is starting to be considered viable for autonomous forklift trucks.

“There is a huge trend for LIDAR for slow moving objects such as forklift trucks or robots,” said Sudhanshu Kapoor, LIDAR Product Manager at Panasonic. “They want these to drive autonomously for moving packages in warehouses. For this they need 3D LIDAR.”

This is an easier application than automotive as it is in a controlled environment. Panasonic is making the hardware for this and working with software developers in the hope of having a system in production by late next year. 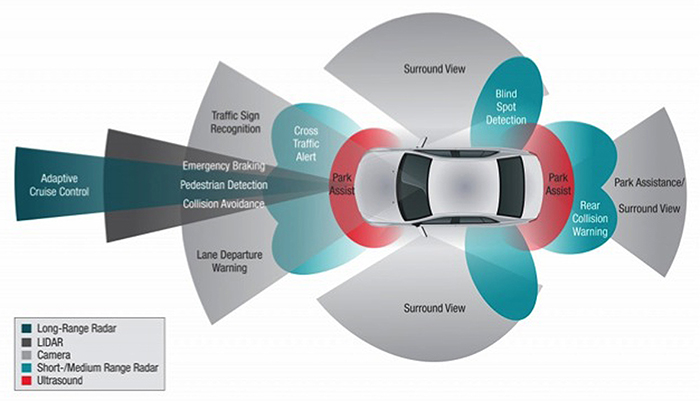 Above: The role of different sensor types in an automobile

Nevertheless, the automotive industry has seen a surge in start-up companies leaping onto the LIDAR bandwagon with different ideas of how to solve both the technical problems and reduce the cost. A LIDAR system basically has five sections. There is the laser itself, the beam steering function, the sensors, the optics and lens, and a compute engine to process the data.

One of the big arguments is whether to use 905 or 1,550nm wavelength for the laser. As mentioned, LIDAR suffers because only a small percentage of the energy beamed out comes back to the sensor. This can be countered by increasing the energy of the laser beam. Those working on

1,550nm have taken advantage of that and have had some very good results, but this is expensive as it tends to use more exotic semiconductor technologies.

On the other hand, 905nm can be built using low cost CMOS but it cannot have its energy pumped up too high as the beam can be damaging to the human eye. This means the beam steering and optics have to be much more efficient, and the sensor technology has to be capable of detecting very low levels of returning light.

“When the laser hits a target, the number of returning photons drops in relation to the square of the distance,” said Edel Cashman (above right), Senior Applications Engineer at Sensl Technologies. “So you have rapidly diminishing photon returns. This problem is compounded when the laser hits objects such as tyres that are not very reflective.” 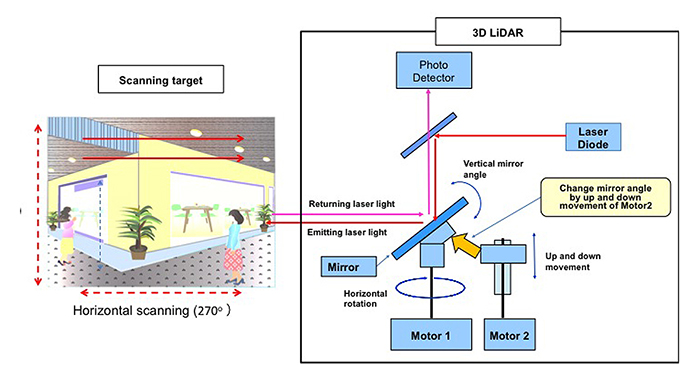 At a distance of 100m, only five percent of the photons are reflected off a tyre and only a small number of those go back in the right direction to be picked up by the sensor. Sensl is trying to get round this by using a silicon photomultiplier as the sensor as this can detect single photons. This type of sensor was originally used in the medical field for detecting cancers.

“Our customers say they can achieve these objectives with our sensors,” said Appelman. “They will have to do some system work to get there.”

While some doubt that 905nm LIDAR will ever be good enough, Appleman thinks this will turn round within the next 18 months.

“We will see the 905nm systems proving their metal,” he said. “The industry will know if it is a fad by then, though it will be a few more years before it is seen in high end cars. That will be 2025 or beyond.”

Conclusion
LIDAR looks set to be one of the enabling sensor technologies that will be part of the autonomous driving revolution. However, the industry still has problems to solve before it can be deployed in road cars. However, with so many new companies putting their brains to work on these challenges, and with so much at stake, there is a lot of confidence that LIDAR will make the grade.