A team of researchers have developed Octa-glove – a device capable of securely gripping objects underwater.

The glove is designed to perform the same function as a sucker of an octopus. Compliant, rubber stalks capped with soft, actuated membranes are capable of adhering to flat and curved surfaces.

Virginia Tech Assistant Professor Michael Bartlett, who led the team, said: “Nature already has some great solutions, so our team looked to the natural world for ideas. The octopus became an obvious choice for inspiration.”

Whilst an octopus is automatically capable of picking up objects, the glove needed a way to sense objects and trigger the adhesion.

Assistant Professor Eric Markvicka from the University of Nebraska-Lincoln was brought in. He added an array of micro-LIDAR optical proximity sensors that detect how close an object is. The suckers and LIDAR are connected through a microcontroller to pair the object sensing with the sucker engagement – mimicking the natural movements of an octopus. The sensors also make the system more adaptable.

“When we look at the octopus, the adhesive certainly stands out, quickly activating and releasing adhesion on demand,” said Bartlett. “What is just as interesting, though, is that the octopus controls over 2,000 suckers across eight arms by processing information from diverse chemical and mechanical sensors. The octopus is really bringing together adhesion tunability, sensing, and control to manipulate underwater objects.”

The researchers wanted the system to be something that felt natural for humans to use, so their solution was a glove integrated with synthetic suckers and sensors. This wearable system allows the user to grab various different shapes easily, underwater. 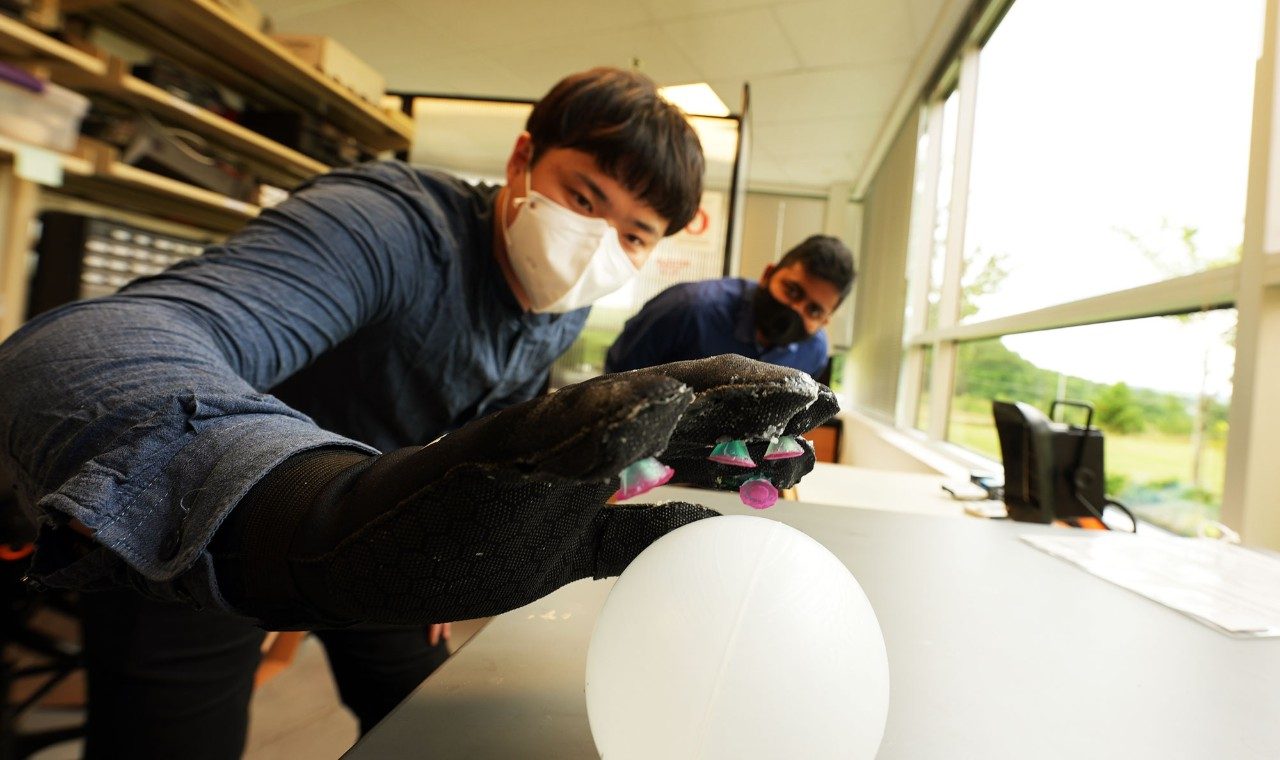 Chanhong Lee and Ravi Tutika test the Octa-Glove in the lab of Michael Bartlett. Photo by Alex Parrish for Virginia Tech.

“By merging soft, responsive adhesive materials with embedded electronics, we can grasp objects without having to squeeze,” said Bartlett. “It makes handling wet or underwater objects much easier and more natural. The electronics can activate and release adhesion quickly. Just move your hand toward an object, and the glove does the work to grasp. It can all be done without the user pressing a single button.”

Different gripping modes were tested by the researchers. A single sensor was used to manipulate delicate and lightweight objects – users could quickly and easily pick up and release flat objects, metal toys, cylinders, the double-curved portion of spoon and an ultrasoft hydrogel ball. By utilising multiple sensors, users could grip larger objects such as a plate, a box, and a bowl. Even flat, cylindrical, convex, and spherical objects, of both hard and soft materials, were adhered and lifted, even when users did not grab the object by closing their hands.

“These capabilities mimic the advanced manipulation, sensing, and control of cephalopods and provide a platform for synthetic underwater adhesive skins that can reliably manipulate diverse underwater objects,” said postdoctoral researcher Ravi Tutika. “This is certainly a step in the right direction, but there is much for us to learn both about the octopus and how to make integrated adhesives before we reach nature’s full gripping capabilities.”

The glove will benefit rescue divers, underwater archaeologists, bridge engineers and salvage crews who all use their hands to extract people or objects from the water.

The team envision the glove assisting in the field of soft robotics for underwater gripping, applications in user-assisted technologies and healthcare, and in manufacturing for assembling and manipulating wet objects.