Home > Products > Now you sense it, now you don’t…
Sensors

Now you sense it, now you don’t…

Established sensing principals are getting a make-over thanks to MEMS technology which is creating quite a stir from both a technology and commercial perspective, as Philip Ling discovers.

Many of the so-called Mega Trends around today are enabled at some level by transducers or actuators; detecting and reacting to the presence or absence of a ‘real world’ property remains the primary method for interacting with technology. As the IoT extends its reach this is likely to increase, in fact sensor technology is now so integral to current and future applications that its a hotbed of development and innovation. And notably it is MEMS technology that is drawing the most attention.

Whether measuring heat, light or pressure the fundamental principals of resistance, capacitance and inductance remain the bedrock of sensor technology; most transducers rely on one or a combination of these principals to detect (and therefore measure) a changing parameter. However, while many will be familiar with touch-screen technology enabled by proximity sensors, or multiple-axis gyroscopes - both of which have become prolific in smart phones - there are many more applications where the sensors used are much less apparent, yet no less essential. An example is gas and vacuum sensors, which enable many industrial applications. Now, both are getting a MEMS makeover that could see their use extending further. 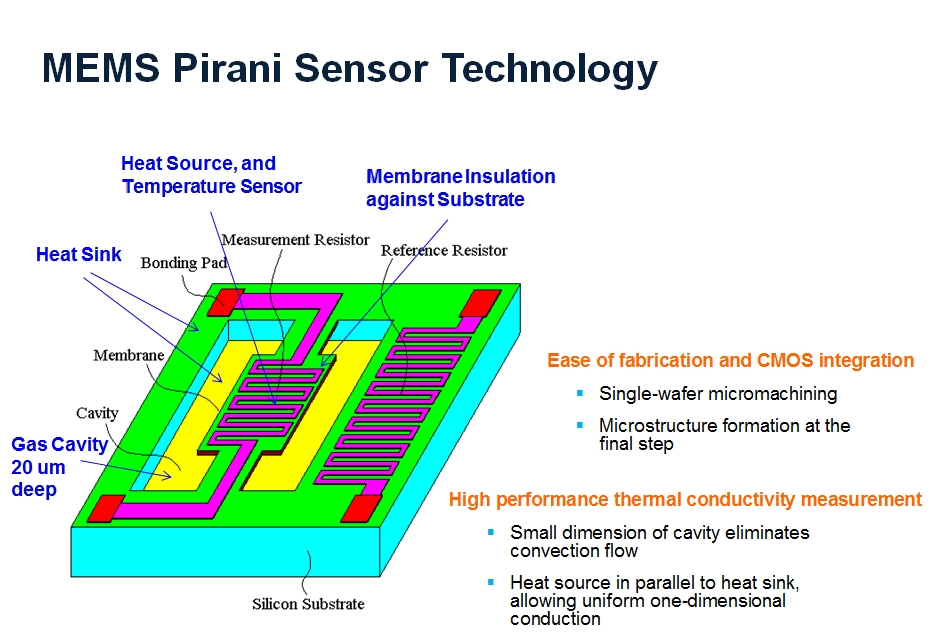 The detection of an absence of gas is equally important, according to Posifa Microsystems. There is a growing number of applications for smaller vacuum sensors, such as leak detection, but their use is also increasing in analytical instruments, for example in portable mass spectrometers for first-responders, which are used to detect hazardous materials; the tests are carried out in a vacuum using battery-powered instruments, so require smaller and low power solutions. Posifa recently introduced the Pirani series of MEMS vacuum sensors targeting HVAC applications, which works on the principal that the thermal conductivity of gases is proportional to the pressure in the low vacuum range. The sensor measures minute changes in the resistance of a heated element, resultant from the heat transfer to the surrounding gas (Figure 1).

The platinum thin-film resistor sits on a thermal insulating membrane, suspended over a micro-machined 25μm cavity which holds the gas measured. The small volume of the cavity preserves a low power solution and fast response time, but the key is the micro structure, according to Posifa. Keeping the membrane from breaking is the core competence, and Posifa believes its proprietary fab process solves this problem.

The PVC1000 series from Posifa offers a response time of less than 5ms and can measure gas volumes as low as 0.1cm3 while consuming less than 5mW, making it applicable for small mechanical systems and portable digital vacuum gauges, according to the company. The sensor can also be cleaned by immersion in a solvent, and is able to operate in relative humidities between 0 to 100% (non condensing).

The demand for gas sensors in portable and wearable applications that employ a multi-sensor approach is also set to increase in the coming years, according to ams. It recently announced the acquisition of solid-state gas sensor specialist, AppliedSensor, which is currently developing a dedicated gas sensor solution with a leading German industrial OEM.

Dr Heiko Ulmer, ams’ Marketing Manager BU Chemical Sensing, commented: “There is a wide variety of gas sensor applications in automotive, industrial and consumer applications, where they are used to make the products safer, more energy efficient and/or more intelligent.” Dr Ulmer received his PhD working in the field of chemical gas sensors and electronic noses, and was the co-founder of MoTech, which following a merger later became AppliedSensor. As with Posifa’s technology, Dr Ulmer explained that the main challenge in MEMS sensor technology is achieving a robust production process that delivers a high yield within narrow specifications: “This is quite a challenge, especially as the first product was designed for the automotive industry.”

The principal behind the MEMS sensors developed by AppliedSensor is similar to the vacuum sensors developed by Posifa Microsystems: “We apply a MEMS substrate with a silicon frame and a thin silicon-nitride membrane,” explained Dr Ulmer. “A sensor substrate is coated with a semiconducting metal oxide; at elevated temperatures, due to the catalytic effect, its resistance changes in the presence of gas,” the change corresponds to specific gases. “The major advantages of this approach are the low power consumption, low thermal mass, long-term stability and cost-efficiency,” added Dr Ulmer.

An example of how gas sensors are being used to contribute to the IoT comes from AppliedSensor’s indoor Air Quality (iAQ) range, which was successfully designed in to the CubeSensor (from the company of the same name); a ZigBee-enabled device that measures the air quality, light, temperature and humidity of a room and alerts the homeowner through a smart phone app when something in its environment is outside specified parameters. The sensor detects volatile organic compounds through the measurement of CO2 in the atmosphere. The module at the heart of the iAQ is based on one of AppliedSensor’s micro machined metal oxide sensors. 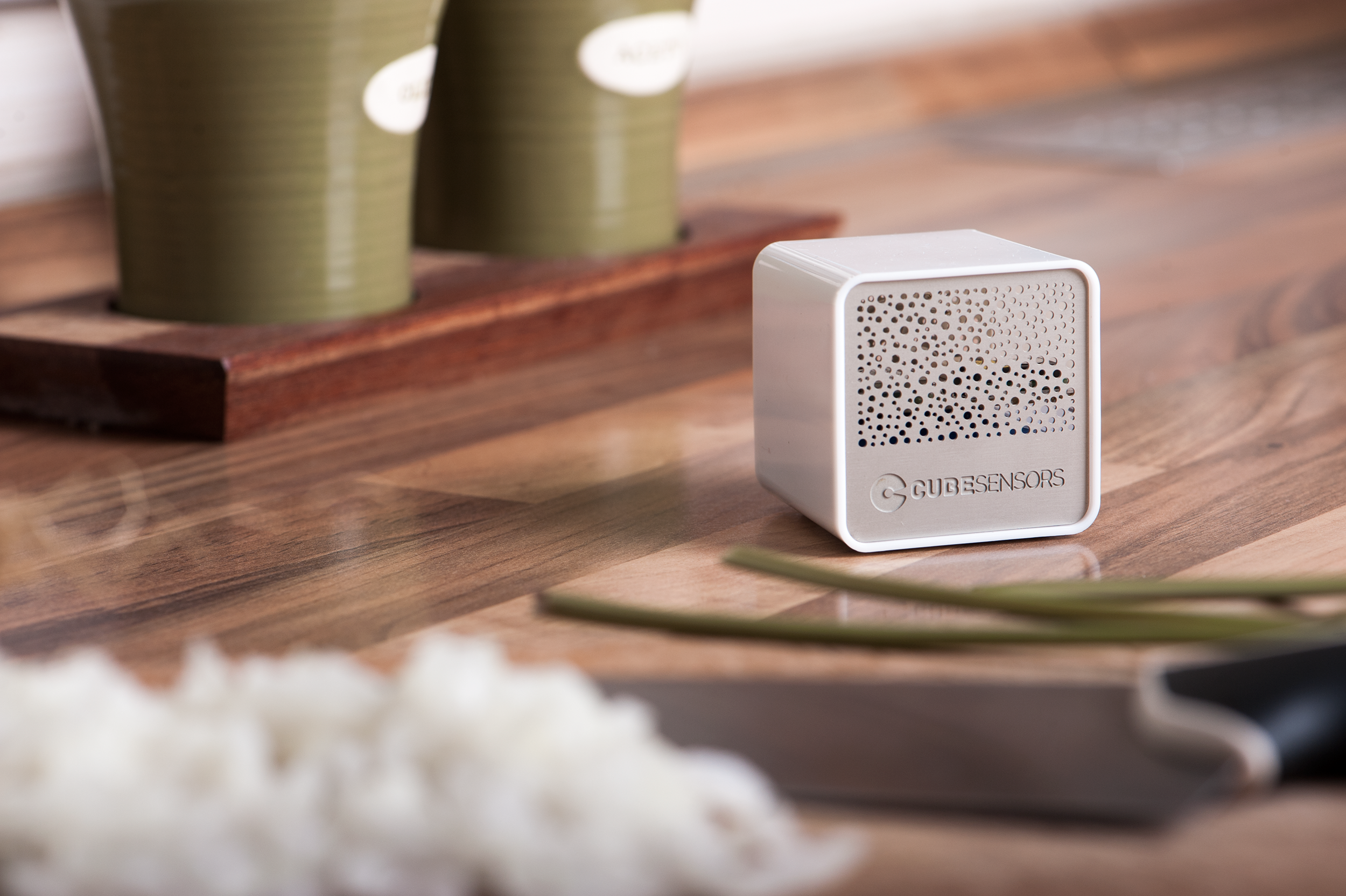 The applications for sensors are virtually unlimited and are set to increase massively thanks to the IoT. Low cost MCUs equipped with wireless connectivity will feed the demand for remote intelligence, which in turn will be enabled by evermore innovative sensors.