Choosing the right rotary encoder for ruggedness and performance

The motion control systems of equipment such as industrial automation or robotics are often reliant on rotary encoders to provide data on position, speed, direction and distance. These typically feature a disc, which is attached to the shaft of the motor whose movements need to be tracked.

Typically, either magnetic, optical or capacitive properties are harnessed to detect and measure motion. Of the three types, capacitive encoders have important strengths that make them a popular choice in a wide variety of industrial use cases.

The disk of a magnetic encoder is magnetised with alternating poles, and a hall-effect or magneto-resistive sensor detects changes in the magnetic flux as the disk rotates. Magnetic sensors can maintain their accuracy when exposed to hazards such as shock, vibration and contamination by substances such as oil, dirt or moisture. On the other hand, they are susceptible to magnetic interference from the motor and have a limited operating-temperature range. In addition, resolution and accuracy tend to be inferior to optical and capacitive types.

Historically, optical encoders have been the most widely used type in industrial motion control applications. The major components are a glass or plastic disk marked with a series of alternating transparent and opaque lines or slots, positioned between an infrared LED source and a set of photodetectors.

As the disk rotates, the marks alternately pass and block light from the LED source reaching the photodetector, producing an electrical output in the form of a square wave. Two photodetectors can be positioned to generate a pair of outputs in quadrature, which allows the direction of rotation to be detected.

However, accuracy can become poor if the disk is contaminated by dirt or industrial fluids such as oil, which can happen in the field or in the factory where the machinery is produced. In addition, vibration and extreme temperatures can damage the glass or plastic disk, while the LED draws a relatively high current and limits the operating lifetime of the encoder.

Capacitive encoders are based on the same principle as digital measuring callipers and comprise a stationary transmitter, a disk etched with a sinusoidal pattern and a stationary receiver. The diagram compares the capacitive encoder disk with those from magnetic and optical encoders. 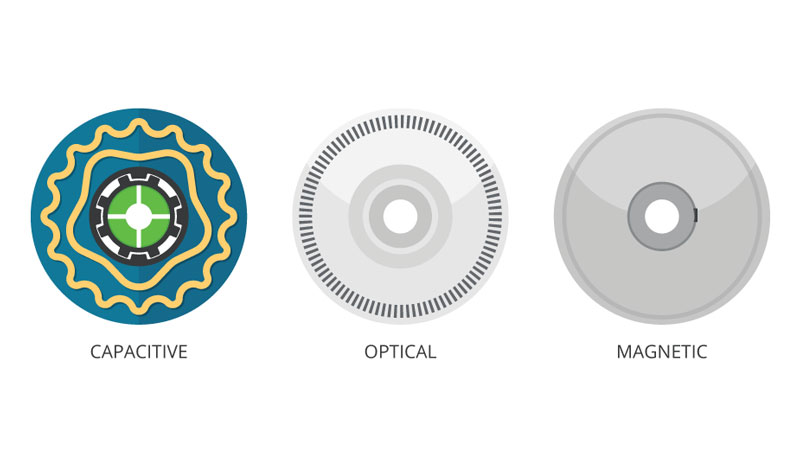 The transmitter emits a high-frequency reference signal that is modulated by the sinusoidal pattern as the disk rotates. On the receiver side, the signal is demodulated to produce a digital output that describes the rotary motion.

Capacitive encoders overcome the disadvantages of optical and magnetic encoders, while retaining comparable strengths and giving the added advantage of superior flexibility. They are less sensitive to environmental contaminants such as oil and dust that optical encoders cannot tolerate. They are also more resistant to vibration and allow a wider operating temperature range. The operating current is usually about 6-18mA, which is much lower than the optical encoder, and there is no LED to limit the lifetime.

In addition, capacitive encoders are not susceptible to magnetic interference or electrical noise. Although as rugged as a magnetic encoder, they are more accurate and allow higher resolution.

The capacitive encoder’s resolution is determined by the electronic signal processing on the receiver side, and not by the encoder disk, which gives engineers flexibility to adjust or fine-tune system parameters such as PID control-loop settings without physically changing the encoder. The index pulse and encoder alignment can also be set digitally to allow BLDC commutation.

A further advantage of capacitive encoders’ digital programmability is that companies can streamline their inventory by keeping a single part number instead of holding several variants for different resolutions.

CUI Devices’ AMT series of capacitive incremental, absolute and commutation encoders contain proprietary capacitive sensing technology that not only ensures high maximum resolution and accuracy, but also provides built-in diagnostic capabilities and value-added features such as One Touch Zero for fast and easy initialisation of absolute and commutation encoders. The encoders can operate from -40°C to 125°C and support shaft sizes from 2-15.875mm (5/8").

In summary, capacitive encoders combine the mechanical ruggedness of magnetic encoders with the accuracy and interference immunity of optical encoders, while introducing additional benefits such as digital flexibility, small size and a wide operating-temperature range. The table above provides an easy comparison of their relative strengths, making them a reliable option for motion control systems.