Did you know there are over five trillion pieces of plastic littering our ocean right now? Eventually that rubbish accumulates together in five ocean garbage patches, with the Pacific being home to the largest one, located between Hawaii and California; called the ‘Great Pacific Garbage Patch.’ If nothing was done about this patch and it was left to circulate the plastic would impact our ecosystems to a level which could damage health and society.

Here steps in The Ocean Cleanup, who plan to use a combination of closing the source and cleaning up what has already gathered, and have developed an advanced technology to finally get rid of the world’s ocean plastic problem.

A full-scale deployment of The Ocean Cleanup’s systems is estimated to clean up 50% of the Great Pacific Garbage Patch in just five years.

To use conventional methods of vessels and nets it would take thousands of years to fix the problem, we don’t have that so here is how the new system works…

Using a passive system, it will use the ocean currents as a driving force to catch and concentrate the plastic by suspending a large sea anchor deep down in a slow moving water layer, which will slow down the system so much that the plastic moves faster than the cleanup system.

Thanks to the screen’s U-shape, the plastic will be funnelled towards the centre of the system, and the highly concentrated debris will be buffered until it is extracted and shipped back to land.

The Floater:
The systems floater will be a continuous hard-walled pipe made from high density polyethylene (HDPE) - an extremely durable and of course recyclable material.

With the screen, the purpose of the floater is to catch and concentrate the plastic whilst providing buoyancy to the whole system. Being flexible enough to follow the waves and rigid enough to maintain an open U-shape, the floater will be about 1-2km.

Algorithms help specify the optimal deployment locations, after which the systems roam the gyres autonomously. Real-time telemetry will allow the team to monitor the condition, performance and trajectory of each system.

Capture Efficiency:
The plastic will arrive at the moving systems at a significantly lower speed than at a fixed structure, which is a positive factor for the systems capture efficiency.

The downforce on the plastic, created by water that needs to move underneath the solid screen, will also be smaller. In fact the lower the downforce, the greater the chance particles do not get pulled under the screen.

What is the expected impact?
Designed to capture small plastics, in sizes as small as 1cm, the Cleapup system will also collected massive discarded fishing nets (ghost nets) of up to 10m in size too.

In removing the plastic whilst it is still large it prevents it breaking down into dangerous microplastics.

The Cleanup and source reduction on land combined together will pave the road towards a plastic free ocean. 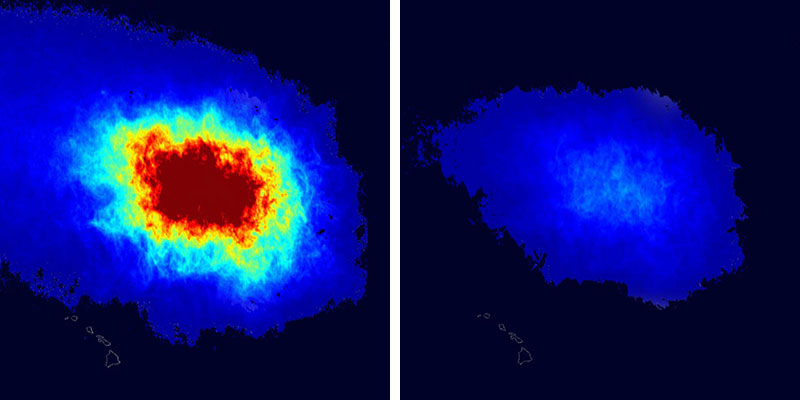 To catch the plastic- you must act like plastic…

Waves, winds and currents make the plastic move in a certain manner. The same forces will act on the designed roaming systems, causing them to gravitate to the areas in the garbage patch with the highest concentration of plastic.

The more cleanup systems released, the more plastic will be collected.

The Cleanup system is energy neutral:
The new systems will fully rely on the natural ocean currents and will not require an external energy source to catch the concentrate the plastic. The electronics that are used, such as lights and AUS will all be solar powered.

Throughout the past three years The Ocean Cleanup has developed extensive scale models and prototyping. The next step is to deploy a pilot in the North Pacific later this year, and keep improving the design based on testing. The first operational cleanup system is expected to commence in the Great Pacific Garbage Patch by mid-2018.