Our website is made possible by displaying online advertisements to our visitors. Please consider supporting us by disabling your ad blocker.
Home > Products > Why use fast response programmable power supplies in automotive testing?
Power

Why use fast response programmable power supplies in automotive testing?

The market size for global automotive electronics manufacturing was valued at USD 217.86 billion for 2020 . Despite supply chain issues and uncertain markets, it is anticipated to register a CAGR (Compound Annual Growth Rate) of 8% for several more years.

In addition to the deployment and design of electric and hybrid vehicles, improved fuel economy and increased safety are being mandated by governments and consumers. This includes speed restrictions, automated braking, lane changing sensors, alcohol interlocks, cameras, and even remote vehicle shutdown features. 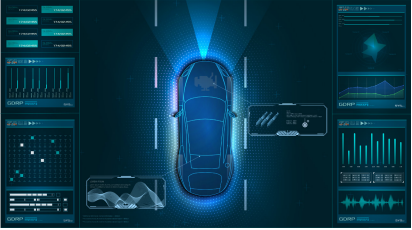 Electronic components, systems, and software need extensive simulation and testing during vehicle development and production for which carmakers use ISO (International Organisation for Standardisation) standards ISO 16750-2 and ISO 7637-2. These have been developed to ensure that automotive systems will continue to operate through several scenarios, including transient voltages, without loss of function or damage. High voltage surges of greater than 100V with very short durations of 0.15 to 2ms are now included in these standards. Designers must, therefore, consider multiple situations, including a vehicle starting at a very low temperature (cold crank), batteries being removed while the alternator is still running (load dump) and jump-starting vehicles with a flat battery or batteries.

From a manufacturing perspective, to increase the output of a process to cope with additional demands, either more machines must be installed in the factory, or faster machines capable of building more parts per day. Often factory floor space is at a premium and capital expenditures may be restricted.

The same applies to automated test equipment. In normal use, the electronics in automotive applications are powered by automotive batteries and alternators. During the production test stages though, programmable DC power supplies operating from an AC mains source are required. These mimic the battery voltage fluctuations experienced in both normal driving conditions and extreme environments during highly automated computer-controlled testing. If test routines can be shortened, more parts can be tested without adding extra capacity.

Programmable power supplies with faster up and down response times offer automotive part manufacturers the ability to shorten test times and allow more realistic test routines. This can enhance vehicle reliability as parts can be more thoroughly evaluated during their design and development stages.

Hardware in the loop (HIL) enables automotive designers to run complex simulations to validate their designs, particularly with the increasing amount of software being deployed. Engine management systems and other electronic control units can benefit from HIL as testing can be performed without installing it in a vehicle. The systems and units react to the software in the same manner that they would if physically connected to an engine. Thousands of tests and subsequent modifications can be run quickly and at a lower cost without risk to a test vehicle. The faster a programmable power supply can change its voltage, or current setting, the more tests are performed per hour.

What limits a programmable power supply’s up and down speeds?

An AC to DC power supply has two main functions. One is to isolate the AC mains input from the DC output to prevent the user from receiving an electrical shock. The second is to provide a filtered, regulated, adjustable DC output. The filtering consists primarily of inductive and capacitive elements (Figure 2), which reduces the output ripple.

The larger the output capacitor, the lower the magnitude of the output ripple. The capacitor will take longer to charge and discharge as the output voltage is programmed higher or lower. Unfortunately, this extends the power supply’s rise and fall time, which can also impact the response time of the communications interface. Many programmable models have an integral active load to help discharge the output capacitors. However, these circuits have limited power dissipation and may not be intended for frequent activation. 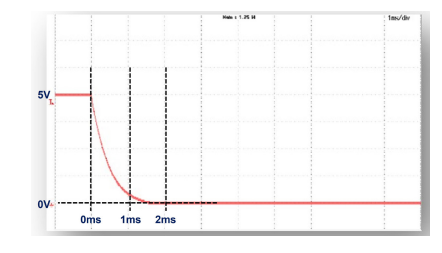 Programmable power supplies can be connected in parallel to deliver more power. To ensure that they share the load, an analogue signal is used to communicate between the units. This, too, can significantly degrade the rise and fall times.

TDK-Lambda’s GENESYS+ series (Figure 4) has a patented digital technology allowing multiple programmable power supplies to be paralleled and still achieve a dynamic response and ripple and noise performance comparable to that of a single power supply. A simple parallel data link cable is connected between the units, which automatically configures and sets their parameters accordingly. Systems up to 60kW can be configured. 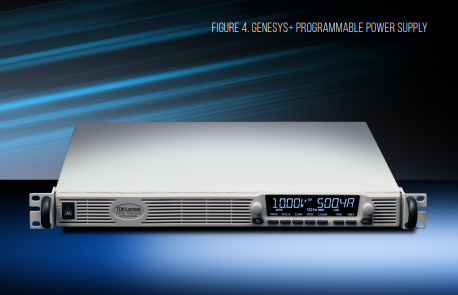