Ever since the transformer was invented, these inductive devices have been the basis of power conversion equipment. Modern devices use a transformer with a big winding ratio to step down from the high voltages required for efficient energy distribution (the mains) to the low voltages required to power electronic circuits. The trouble with transformers is that they can be a source of losses which contribute to lowering efficiency and heating the system. They are also bulky as they don’t lend themselves to miniaturisation or integration.

Using capacitors as an alternative energy storage device in power supplies is therefore attractive as voltage conversion circuits can be smaller and simpler. Switching schemes can be implemented on silicon in a similar way to switched mode power supply controllers. While this idea has been around for some time in the form of charge pumps, these topologies have only been used in low voltage, low power applications.

US-based Semitrex has come up with a novel idea for a power supply topology which can convert from rectified mains voltages all the way down to low voltage, without relying on magnetics. According to the company, their switched capacitor-based design is incredibly efficient, even at low loads, and can be integrated onto a chip. Reducing the voltage through banks of capacitors in stages, which it calls ‘cascading capacitors’, it can produce the low voltages required for battery charging or even lower, with very little energy lost at each stage. 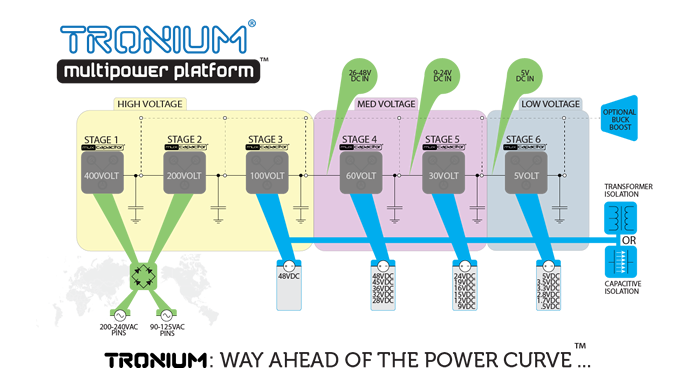 “We’ve modified transistors inside a semiconductor chip to open gates and let the electrons go into ‘holding cells’ – capacitors. With two capacitors connected together, 220V goes in, then we separate the capacitors and in one phase send half of that energy on at 110V [discharge one capacitor] and in the next phase, send the other half of that energy on at 110V [discharge the other capacitor],” Freeman explained. “Once we’ve halved it, we can do it again to get 55V, again to get 27.5V, and repeat. Within four, five or six cascades of capacitor connections and disconnections, we’re able to break the voltage down to useable levels at extremely high efficiencies. Our recent tests showed that we are sending that energy on at over 99.9% efficiency at every stage.”

Switching and timing
The multi-chip module power conversion product Semitrex has been working on for about three years, Tronium, uses both on-chip and external capacitors to power systems up to 12.5W. Specially optimised algorithms handle switching the capacitors on and off, that is, charging and discharging them at the right time, and determine how many stages of voltage reduction are required to produce the target output voltage.

Multiple stages are still required because, as Freeman commented: “There’s no realistic division that will get you from 230V to 5V in one stage.” Tronium therefore uses multiple high, medium and low voltage stages, but the upside is the output can be taken from any one of these stages by reprogramming the device. That means that a single multi-chip module can act as a power supply for many different types of devices. All the manufacturer has to do is program it for whichever voltage is required via an I2C interface. This can be done on the assembly line during the final test of the product. The downside of having multiple stages is that although the stages are very efficient, some energy is lost to opening and shutting the gates and holding them closed at each stage, so if more stages are required, more energy is lost. For example, European mains voltages (rectified to 325V) require an extra stage compared to US mains (rectified to 170V), but the overall efficiency is still very high, between 97 and 98%.

Another crucial aspect of this technology is that it consumes very little power in standby mode. While existing power supplies and chargers for consumer electronics products have a notable problem with consuming energy from the mains while not plugged into the end equipment, Semitrex’s capacitor-based system consumes very little. Its standby power consumption is 0.5mW at US mains voltages, or 1mW at European mains voltages (compare this with the limit imposed by the US Department of Energy level VI regulations which limit standby power for 1-49W devices to 100mW).

Although Tronium is a multi-chip module, all the die are silicon - no exotic process technologies are required.

Solar inverters
As well as voltage converters, Semitrex’s technology can also be used in inverters, though this application will require different hardware. The company is actively developing a product for solar inverters through a new London-based subsidiary. While the EU has set a target for member states to get at least 20% of their electricity from renewable sources by 2020, domestic solar panels are still considered to be inefficient, with bulky inverters installed separately. This is especially true in sub-optimal weather conditions when current reaching the inverter from the panel is far below rated current - in some cases, inverter efficiency can drop to 70-80%.

Above: a block diagram for the Tronium module

With Semitrex technology, the efficiency and size of these inverters can be vastly improved - the inverter’s efficiency is 97% or better from 100% to one percent of rated output power, and the package is reduced to around one square inch.

“Because our technology doesn’t use a transformer, whether it’s a cloudy day or a sunny day, a little current produced or a lot, we still run with the same efficiency,” Freeman added. “The inverter can also be small enough that it doesn’t fit into the attic, it can just be integrated into the photoelectric panel, so when it’s shipped it already has the inverter in it.”

Freeman expects that the level of intelligence Semitrex’s inverter solution will offer will provide additional benefits in the form of communication. He says this will allow future installations to measure how much energy they are producing and feed this information back to the grid, giving operators an accurate picture of how much energy is available from domestic energy generation installations at any time in case the grid experiences high demand.

“The inverter samples should be available Q1 next year,” Freeman concluded. “On the converter side, we’re doing final optimisation, but we should have samples ready by the end of the year.