Industrial IIoT for all

Industry 4.0 can benefit even the smallest factory and is leading to manufacturers locating plants closer to customers. Steve Rogerson reports.

The Industrial Internet of Things (IIoT) and so-called Industry 4.0 are making radical changes to manufacturing with connected factories and machinery being monitored as never before, allowing maintenance to be predicted and down-time to be reduced dramatically. However, it is one thing to build a new factory that meets this vision from scratch, it is another to update an existing factory.

Most industrial units have been around for many years and contain a mix of legacy machinery, some many years old, others more modern. To unify these into one connected production unit can look daunting to say the least.

The answer may be not to try. That is not being defeatist but rather being practical. Rather than going for the whole dream, the reality for most factories is to do it a bit at a time, and providers of connected and automatic industrial equipment realise that and are ready to help plant managers start their journey.

“People look at green-field sites and that seems so far out of their reach,” said Cathie Hall, Managing Director of enterprise resource planning company K3 Syspro. “But they could start by looking at what they have rather than what they don’t have.” 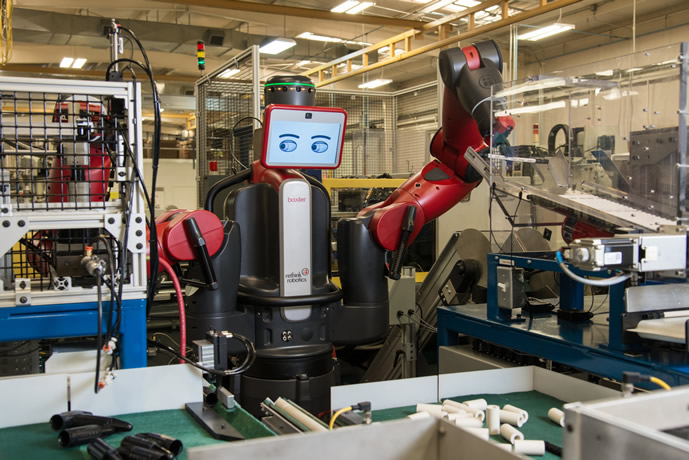 For example, if a machine can output a CSV file, that means it is already measuring some parameters, and that is a start. That file could be sent to a customer with, for example, all the serial numbers of the items being manufactured. The customer could then use that to save time as the goods arrive, as they would no longer need to record the numbers themselves.

“Something as simple as that is bringing the supply chain closer together and can save money,” said Hall. “Look at what you have. Some of the technology has been around for 20 years but people don’t really use the data provided, yet they could benefit from doing that.”

And the file probably has other data as well, such as speed, temperatures, times when on and off line, and so on. This is information a modern machine learning system could use and analyse and start to make predictions based on, for example, when some parameters are starting to go out of tolerance.

A good place to start
This might not be enough information to do a detailed analysis, but it is a starting point and it can show what additional data is needed. For example, there may be a specific requirement to know the humidity, but that could be done with a device that sits on the factory wall and the data it produces can be added to the information already available.

“So look at your existing data,” said Hall. “Once you have started and are creating value, you can invest that in the next level up. It is a staircase. Once you are on the first step, you can move to the second step and so on. That might involve putting some intelligent devices on the machines themselves to start collecting more data. But stay grounded - know what you want to do with the data.”

Sui Shieh, Vice President for Industrial at Maxim Integrated, added: “There is real benefit to be gained from just adding sensors. The maintenance guys say these really help them.”

For example, a sensor that measures the vibrations of a motor can help show when that motor is reaching a point where it might fail.

“The first question to ask though is what do you already have in terms of communications,” said Dan Isaacs, Xilinx’s Director of Connected Systems Corporate Strategy Marketing. “There are normally PLCs talking to each other. There will be some communications there. The next question is how do you keep that legacy link and bring in the new technology. With the IIoT, it is about getting access to the data that was previously not accessible.”

Robotics
When it comes to installing new machinery, this does not need to be done at once. In fact, a whole line does not have to be put in at the same time. There are factory robots available that can work with human operators on just parts of the line.

“If you look at companies such as Universal Robots and Rethink Robotics, they make products that can be added to traditional production lines,” said Hall. “Some have systems where, say, the human will place the components and the robot will do the soldering. They work in tandem with humans.”

This, she said, could help companies start the transition to a more automated factory rather than having to shut down production to build a new line.

“If you put a full robot line in and it doesn’t work out, you can’t go back,” she said. “But with a small robot, you can have it working alongside humans and you haven’t got rid of your skill sets. This is a journey and the companies that make the robots are helping the manufacturers along that journey. And the small robots can also be redeployed in the factory if needs change.”

This is because these robots are often flexible enough to be taught to learn different jobs. A human can literally take the robot by the hand and train it for a particular task.

“It can be a phased approach,” said Isaacs, “bringing new technology in element by element. The phased approach has to consider the legacy equipment but knowing they need the new technology because that is the only way they can stay competitive. The have to reach new levels of efficiency.”

One of the effects of industrial automation has been a reversal of the trend for companies to put their manufacturing capability in countries with cheaper labour, such as in Eastern Europe and the Far East. Labour rates in these countries are now rising, noticeably in China, and Industry 4.0 and the IIoT lead to less labour intensive production. This is likely to get worse as China’s working population shrinks due to its one-child policy. 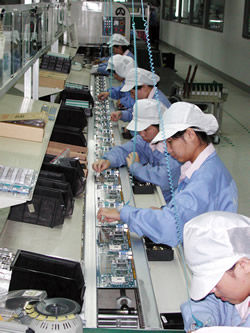 “Labour costs are going up in China,” said Shieh, “but they are not going up in Europe and the US, so the gap is getting closer.” Isaacs added: “These areas are catching up with labour costs to the point where they are not seeing the cost benefits.”

Also, having the manufacturing plants closer to the customers creates more flexibility, making it easier to make one-off or customised products with short lead times.

“This is driving companies to have more localised production,” said Hall. “You can’t manage that in Eastern Europe and the Far East because of the length of the supply chain.”

The balance to that, especially in electronics manufacturing, is that a lot of the component suppliers are in the Far East. However, there are other costs to consider, such as warehousing.

“You can’t have daily deliveries from a supplier in Asia so you have to hold high levels of stock to keep lead times down,” said Hall. “With all this, the decision to move back home becomes compelling especially with the much cheaper robots, less labour and more productivity, plus less down-time with predictive maintenance and increased quality.”

This has already had a notable impact in the US where manufacturing has increased by around 45% during Barack Obama’s presidency.

“Some of that is manufacturing that is coming back,” said Shieh. “There are two driving factors. One is the improvement in quality and the other is being closer to the end customer.”

In China, for example, he said that people tended to move jobs a lot and that meant there were always new people on the production line, which could affect quality, whereas in Europe and the US people usually stayed in the same job for longer.

Conclusion
Industry 4.0 and the IIoT are bringing what is being called the fourth industrial revolution. The third was about automation but this one is about tapping into the data and using them to do what they could never do before.

Preventative maintenance alone can save manufacturers vast amounts of money in reduced down-time. “The ideal goal is no unplanned down-time,” said Isaacs.

These advantages are not just available to the large companies. For just a small outlay, any machine can have its vital signs monitored, and with that can come big advantages.