Fans are a vital element of many electronic systems, designed to keep the device operating within recommended temperatures, while making sure the electronics are working at their optimum level. Attempts have been made to find alternative thermal management methods, with none proving as effective and economical as the fan.

A fan displaces air by means of a rotor that spins on a bearing. Key to fan design is the consistent functioning of that bearing, since a fan will rotate literally thousands of times per minute over a lifetime of numerous years. It is a process that puts a huge amount of stress on the bearing, making it crucial that it is up to the job.

The sleeve bearing and the ball bearing are the two bearing designs most commonly used, with each presenting their own set of strengths and limitations.

Sleeve bearing fans
Sleeve bearing fans are used extensively across numerous applications because they have a simple design, and they are rugged and low cost. Their ruggedness allows them to operate in harsh settings and they are less liable to break down due to their simplicity. In addition, this design is less noisy during operation which means they can be used widely in quiet environments such as the home or offices.

A sleeve bearing fan has a central shaft that is enclosed in a sleeve-type assembly, using oil as a lubricant to facilitate rotation. This sleeve protects the shaft and makes sure the rotor remains in the correct position, maintaining the gap between the stator and rotor. 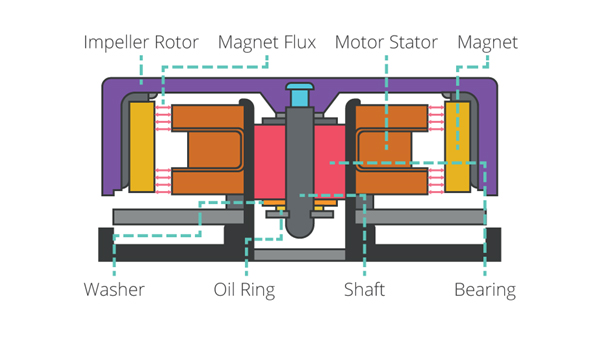 Obtaining the correct gap size between the shaft and the sleeve can sometimes prove to be something of a balancing act. Too little space creates a rise in friction, making the fan difficult to start as well as drawing more power; if the gap is too big, the rotor can shake. Another stumbling block in sleeve bearing construction arises from the fact that the sleeve is the single physical means of holding the rotor in position and, as such, the shaft will eventually erode the bearing bore.

This becomes worse if the rotor continually rotates in the same direction; a situation which eventually leads to the bore acquiring an oval shape, causing noisier operation along with a shorter lifespan. However, if the fan is operated in multiple positions, the bearing becomes eroded in different areas, resulting in an uneven surface that can create wobble and more noise.

Sleeve bearing fans are typically used in static equipment designs and those operating within normal temperatures. Many applications, from office equipment and computers to industrial cabinets and heating, all make widespread use of sleeve bearing fan designs.

Ball bearing fans
Ball bearing fan designs, on the other hand, address some of the disadvantages found in sleeve bearing fans. Generally, they are less inclined to deteriorate over time, can work at higher temperatures, and are able to operate in any orientation. Then again, ball bearing fans have a more complex design, are more expensive and are more susceptible to shock and vibration than their sleeve-bearing counterparts, which all combine to have an impact upon overall performance. In addition, they typically create more audible noise, which limits the areas where they can be used.

The ball bearing fan design uses a ring of balls around the shaft to resolve rotor wobble issues and uneven wear. The majority of fan motor designs comprise two bearings, one in front of the other, typically separated by springs. This bearing design delivers less friction than sleeve designs, and the springs support any tilt in the fan caused by the weight of the rotor. If the springs are positioned around the whole of the shaft, the fan can work at any angle without causing friction or wear, providing a more reliable design.

Ball bearing fans are found in data centers and high density computer applications, where temperature, performance and MTBF are all more significant issues over noise. They are also used extensively throughout industrial applications for cooling electronics systems and as blowers for industrial drying applications. 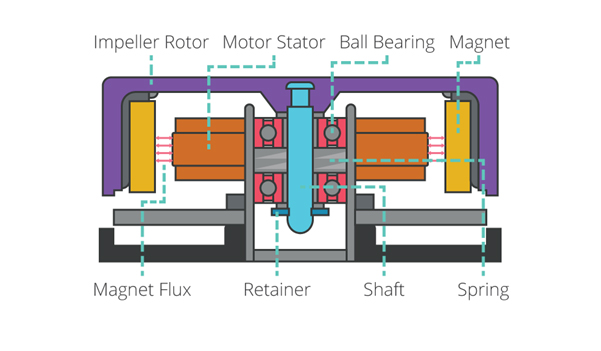 omniCOOL system fan bearing
However, sleeve and ball bearing designs are not the only two choices available. The omniCOOL system is an alternate bearing design developed by electronic components manufacturer CUI Devices that uses magnetic rotor-balancing together with an improved sleeve bearing to compensate for the disadvantages of the other fan designs.

The magnetic structure of the omniCOOL system causes the rotor to operate in much the same way as a spinning top, but one that can function at any angle without toppling over. The magnetic rotor balancing structure is positioned at the front of the rotor at the point where its flux flows parallel to the direction of the motor shaft. At this location, the magnetic structure attracts the rotor evenly, regardless of the angle at which the rotor is set. 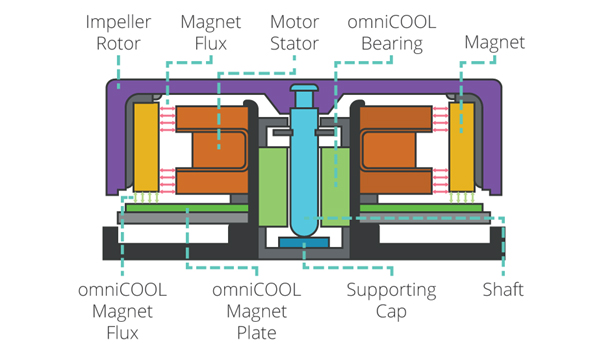 The top point of the shaft remains in position via a supporting cap located at the front of the bearing bore, forming the rotor’s rotational point. This allows the weight of the rotor to be removed from the shaft as well as the bearing sleeve. In addition, the magnetic field attracts the shaft downwards, lowering its center of gravity and reducing wobble and tilt in the process. This results in the fan being able to be deployed at any angle, while also minimising friction.

The omniCOOL system’s magnetic rotor balancing structure can be harnessed in devices where conventional sleeve and ball bearing fan designs are traditionally used in order to counteract both of their drawbacks outlined above. However, for additional improvements, the omniCOOL system makes use of an innovative bearing design that has been reinforced for extra resistance in contact areas. This strengthened bearing design is capable of functioning at temperatures in the region of 90°C.

Moreover, by reducing friction, the system requires less lubricant, so the oil rings and Mylar washers can be eliminated from the design, removing another source of potential contact and rubbing. This, in turn, means reduced resistance and noise at start-up, as well as reducing the number of components required; less parts means the omniCOOL system is more reliable and more straightforward to produce than traditional designs.

A new option for fan designs
CUI Devices omniCOOL system mitigates the disadvantages of traditional sleeve bearing and ball bearing fan designs, producing a robust fan that is economical, quiet and can function at any angle. In counteracting the shortcomings of the other two fan bearing options, the omniCOOL system can be adopted as an alternative to either type of fan, while delivering the advantages of both to any application.

Appliances and environments that once favored sleeve bearing designs now have another choice, but one that also offers ruggedness, low noise and reliability, at the same time as presenting an option with a longer lifespan and the ability to be deployed in any orientation.

For those applications that need ball bearing designs, the omniCOOL system offers the same high temperature resistance combined with reduced wear and tear, while delivering enhanced impact resistance and increased ruggedness.With this new fan bearing construction delivering the best of both options, compromise is no longer needed for designers and engineers.