Intuition suggests that a sample of material compressed uniformly from all sides should reduce its dimensions. Only a few materials subjected to hydrostatic compression exhibit the opposite behaviour, expanding slightly in one or two directions. Researchers at the Institute of Physical Chemistry of the Polish Academy of Sciences have developed a material with exceptionally high negative compressibility via a previously unknown mechanism.

When you squeeze something, you usually expect it to shrink, particularly when the pressure exerted acts uniformly from all sides. However, there are materials which, when subjected to hydrostatic pressure, elongate slightly in one or two directions.

During the search for optimal compounds for hydrogen storage, researchers made an accidental, albeit very interesting, discovery: Under increasing pressure, one of the tested materials elongated significantly.

"Usually, the increase in dimensions observed in materials with negative compressibility subjected to high hydrostatic pressure is small. We are talking here about values of the order of a single percentage point or even less".

"We have found a material of very high negative compressibility, of up to 10% in one direction. Interestingly, the elongation occurred abruptly at a pressure of approx. 30 thousand atmospheres," says Dr. Taras Palasyuk (IPC PAS).

Dr. Palasyuk is conducting research on materials subjected to hydrostatic pressures of one to several million atmospheres (the prefix hydro- means that the pressure acts on the material from all sides). Such high pressures are produced in the laboratory using diamond anvils, between which a micrometre-sized sample is placed.

The sample is in a seal ensuring that the exerted pressure acts on the test material uniformly from all directions. To lead to an increase in pressure, the anvils are compressed by means of a screw. A ruby crystal placed next to the sample acts as a pressure gauge. It changes its mode of fluorescence depending on the pressure exerted upon it. 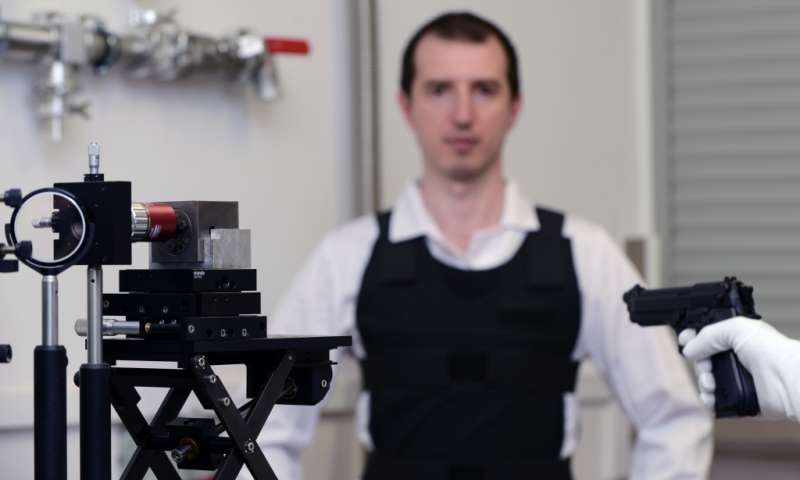 A material with exceptionally high negative compressibility could be used to create better bulletproof vests. Image thanks to Faculty of Materials Science and Engineering at the Warsaw University of Technology, and militaria.pl. Credit: IPC PAS, Grzegorz Krzyzewski

The volume of the material samples exposed to increasing pressure decreases, which is usually associated with a reduction of all spatial dimensions. However, there are also atypical crystalline materials whose volume decreases during compression (because thermodynamics dictates that it must) while at the same time, the crystal elongates in one or two directions.

The mechanism responsible for this elongation has always been of a geometric nature: Under pressure, individual elements of the crystal structure simply moved relative to each other to varying degrees in different directions.

"In our laboratory, using laser light, we analysed how the manners of vibration of molecules in the crystal changed with increasing pressure, and on this basis, we drew conclusions about the structure of the material".

"We quickly discovered that in the crystal we were examining, which was sodium amidoborane, the elongation could not be explained by changes in geometry alone," says Ph.D. student Ewelina Magos-Palasyuk, the lead author of the publication in the journal Scientific Reports.

Sodium amidoborane is a relatively readily available compound with the chemical formula Na(NH2BH3) forming transparent crystals with an orthorhombic structure. The results of research on crystals of this compound obtained at the IPC PAS using Raman spectroscopy were confronted with theoretical model predictions.

It turned out that the negative compressibility of sodium amidoborane crystals has to be a consequence of the elongation of the chemical bonds between nitrogen, hydrogen, boron and nitrogen, caused by the abrupt formation of new hydrogen bonds between adjacent molecules in the crystal.

"Sodium amidoborane is thus the first material known to us where the negative compressibility is primarily of a chemical nature," says Dr. Taras Palasyuk, stressing that in contrast to other materials in which the symmetry of the crystal structure changes under high pressure, there are no drastic changes in sodium amidoborane.

He adds: "Our preliminary results, obtained by X-ray diffraction at the National Synchrotron Radiation Research Center in Taiwan, also confirm that the material retains its original symmetry. It is precisely because it does not have to rebuild that the increase in the linear dimensions occurs here in such an abrupt manner."

The discovery of a previously unknown mechanism responsible for negative compressibility opens up interesting avenues in the search for new materials with similarly exotic physical properties.

Another potential application of sodium amidoborane could be active bulletproof vests, which would behave like airbags in a car under the influence of the sharp increase in pressure caused by the projectile strike.