The C80 CNC CPU unit mounts alongside an iQ-R series PLC’s existing modules, allowing nanometre scale control over machine tool functions. When applied as part of an iQ-R Platform it contributes toward integrated control over an entire manufacturing production line.

Not only does this improve overall performance, but due to ease of integration and a common programming environment - GX Works3 it can save a considerable amount of time in the design and commissioning phase. Being faster to install and commission reduces set-up costs, while replacing on-machine controls with a full Mitsubishi Electric arrangement can also reduce hardware costs when used to control a CNC production line for example.

The C80 CNC series enables a full production line control system to increase its added value and reduce its Total Cost of Ownership (TCO) in five key areas: improvements in productivity, ease of use, connectivity, functional safety and reliability. 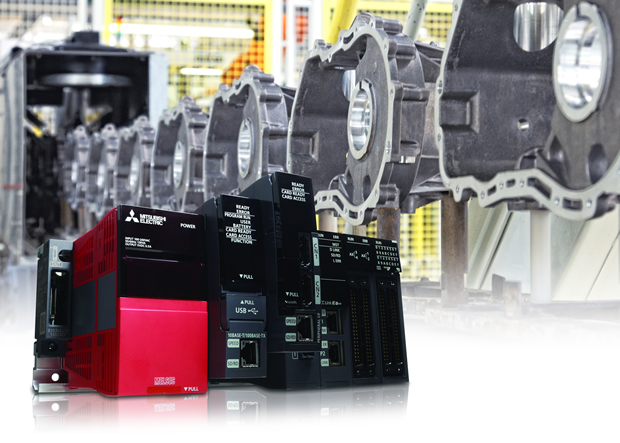 The most important feature of the C80 CNC CPU module and iQ-R PLC combination according to Key Account Manager Frederik Gesthuysen, is the facility to manage complex production lines with a single control platform. “The advantages of integrating a powerful CNC controller with our most advanced modular PLC, the iQ-R, is clearly the performance gain you get from having both devices communicating via a high speed bus; together they are able to coordinate and manage a complete production line from the robots and machine tools to the HMIs and overhead displays. Fast data management and perfectly synchronous operation not only speeds-up production, but can improve quality and allow for more operations to be packed into a smaller space, both of which will increase profitability.”

This is a major advantage for the end user, but the benefit for automation system designers and installers is just as great: using one programming platform and components that are designed to work together completely removes any compatibility issues with using controllers from multiple vendors.

The C80 CNC and iQ-R PLC offer a range of benefits for automotive industry, where the original development work was carried out. Where there are other gains to be made however is with other complex automated manufacturing applications that would otherwise have employed several different CNC solutions and controllers. Configured with up to 3 CPUs (21 part systems and 48 axes) for example, the C80 is capable of controlling highly complex machines.

Machine tool manufacturers and production-line builders alike can therefore both benefit from consolidating overall machine control, motion control and cutting head/spindle control into one hyper-fast platform. Programming is faster and physical costs are lower as multiple functions and machines can be driven from one control source, rather than duplicating PLCs and CNC controllers on each machine.

In a retrofit scenario the C80 and iQ-R combination can be used as the ultimate upgrade option by installing a control platform that has a capacity far beyond any single CNC solution or indeed virtually all other PLC options. Plant upgrades are always under pressure to be delivered cost effectively, so what better way to achieve that than by using a solution with all the inherent benefits built-in, adding both more performance and more user convenience. Once a common control platform is established then further changes and upgrades in the future immediately become faster to implement and less costly, as adding modules to an existing PLC rack is far cheaper than purchasing a complete new controller and having to commission it alongside an existing control and field communication structure.

A reduced cycle time for commands within the control platform is the key to increased system speed and performance; by using one single automation platform that is communicating (between CPUs) via High-speed data transfer, optimal bus communication is achieved between the drives. This allows the operational calculations to be made by a complete hardware structure for the CNC solution, so by calculating in nanometres the whole movement of the servo motors and spindles is increased and the precision of the machine is correspondingly enhanced.

Using one system platform also has a positive knock-on benefit for purchasing and inventory - less part numbers means fewer items kept on the shelf and less paperwork when purchasing from one vendor. Both of which represent considerable TCO savings when applied across a large production facility.

In addition to the added speed and precision, the C80 series provides a range of safety features collectively called the Smart Safety Observation Function. This function has achieved full conformity with the safety standards that cover the entire system including CNC, drive, sensors and communication. Alongside the safety signal monitoring function that monitors redundant signal I/O, this system is equipped with Safety Limited Speed (SLS), a function to monitor the speed of a moving part and the respective shutoff functions. The operating conditions of these safety functions can be programmed in CNC CPU and PLC CPU ladder circuits, thereby allowing you to build a safety system compatible with Safe Operating Stop (SOS), Safe Torque OFF (STO) and Safe brake control (SBC).

The iQ-R Platform, including the C80 CNC CPU controller is part of Mitsubishi Electric’s e-F@ctory concept, incorporating application solutions that enable the automation and digitalisation of industrial processes. The e-F@ctory model is a wide ranging approach that enables the synchronous visualization and control of production, energy consumption and safety that ultimately delivers customers with reduced costs in every phase of the automation process, from development and manufacturing to maintenance and upgrades.