Our website is made possible by displaying online advertisements to our visitors. Please consider supporting us by disabling your ad blocker.
Home > Products > Power over Ethernet based indoor positioning systems
Communications

With its ability to deliver over 90W of power in a safe and efficient manner, Power over Ethernet (PoE) has been a key growth driver of connected lighting systems. Combining this with the advantages of visible light communication (VLC) allows the development of extremely safe, high performance, indoor positioning systems that can offer better performance than RF-based solutions in certain application areas.

In this article, Mike Sandyck, Product Marketing Manager, onsemi looks at how PoE has evolved to become a viable solution for industrial lighting and consider how VLC technology can be added to the system to enable positioning functionality.

The PoE standard was developed to allow low-power peripherals to be powered from a central hub, removing the complexity, cost and compliance issues associated with running mains power around a building. In common with many standards, the IEEE 802.3xx PoE standard has evolved over the years, delivering more functionality and power with each incarnation.

The first standard (IEEE 802.3af) was launched in 2003 and provided15.4W of power for devices such as IP phones, access points and sensors. In practice, due to cable losses, the available power to each peripheral was in the region of 13.0W. The next incarnation of the standard (IEEE 802.3at), also known as PoE+, provided a capability of 30W, reduced to 25W to account for losses. This allowed the powering of more complex devices and the charging of smaller devices such as tablets.

While the capability of Type 4 802.3bt was intended for devices such as laptops, with the advent of LED lighting, it also offers the possibility of powering medium-to-large scale intelligent lighting systems via PoE.

There are many advantages to PoE lighting; two of the primary ones are safety and flexibility. As the PoE bus voltage stays below the 60V DC safety threshold by design, the hazards of AC mains voltage such as electrocution and fire are removed from the system. The only hard wiring needed is to the luminaires – a single CAT 5 Ethernet cable for power and data. This removes the need for (and cost/complexity of) running mains power, including mains drops to wall-mounted switches.

Due to the Ethernet connection, the control side of the lighting system can be set up through the local network, offering a much broader range of control options. Sensors can provide feedback on room occupancy to improve power usage, as well as integration of temperature and air quality control. Wall switches can move to a slim-line energy harvesting wireless design, avoiding the need for batteries or power connections, allowing easy and quick reconfiguration of spaces in the building.

Although not a new technology, as it can be traced back to the 1880s when Alexander Graham Bell developed his photophone, the ability to transmit data streams using visible light as the medium is gaining interest – especially for applications indoors. An obvious application for VLC is light-based networking (Li-Fi) which is particularly useful in hazardous areas where there is a risk of explosion or in areas where sensitive equipment could suffer interference from RF-based wireless, such as in a hospital or on board an aircraft.

Another, less obvious, application is to use light for indoor positioning systems that could guide an automatic guided vehicle (AGV) around a warehouse or smart factory or assist people in navigating large buildings such as airports, sports stadiums or hospitals. Positioning of this kind also gives rise to business opportunities such as location-based marketing – drawing the consumer’s attention to a special offer that they may be standing right next to.

VLC-based positioning systems address many of the issues found with GPS in indoor scenarios. The GPS signal may not penetrate the building very well and, if it does, then as it bounces off walls, the multipath propagation will lead to inaccuracies in the system.

The operation of VLC positioning is somewhat analogous to GPS. Each luminaire has its own unique code that is broadcast by modulating the light at a frequency that is imperceptible to the human eye. A smartphone or other similar device equipped with a camera and an app is able to triangulate the distance from three or more luminaires and calculate the position with an accuracy of less than 30cm.

Energy efficiency and compact size are two of the primary challenges faced by designers of PoE-based VLC systems, along with the need to deliver designs to market quickly. onsemi has a wealth of experience in designing energy efficient solutions for many applications, including intelligent lighting. 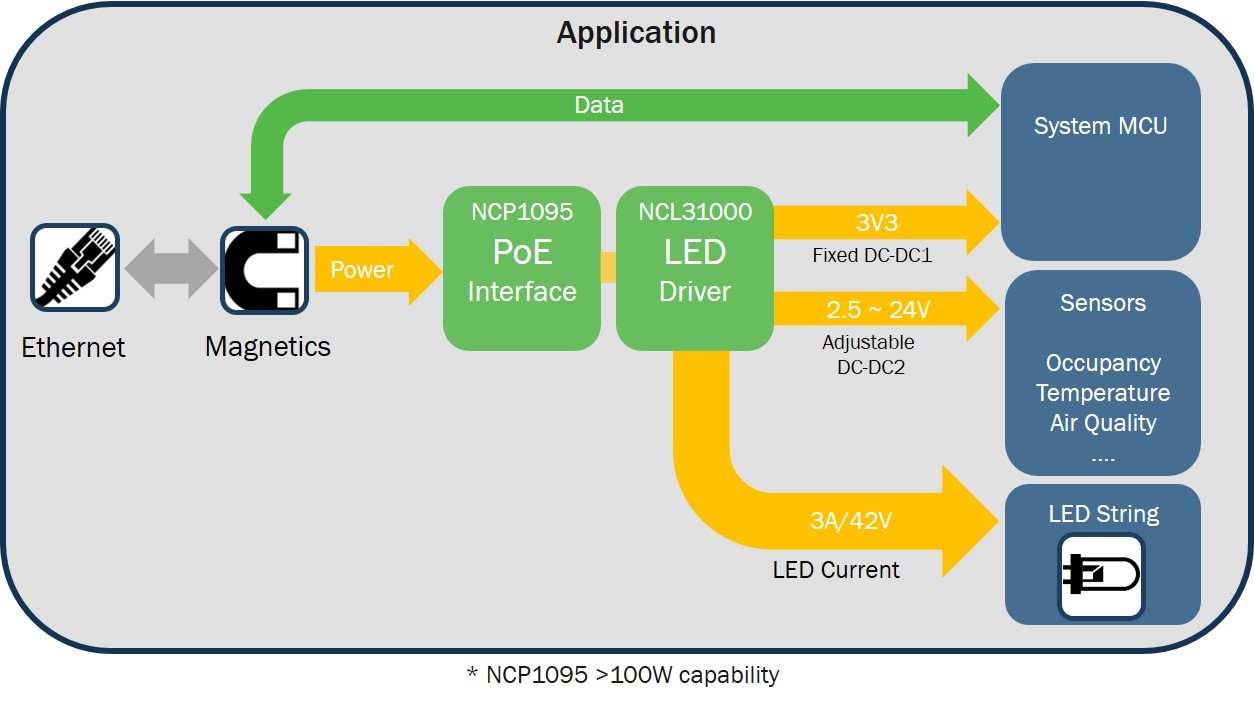 The NCP1095 and NCP1096 are PoE-PD interface controllers that ensure the lighting solution is IEEE 802.3af/at and -3bt compliant. They incorporate all of the functions for a PoE system including detection, classification and inrush current limiting. Both the NCP1095 and NCP1096 support applications up to 90 W, and incorporate over current and over temperature protection, thereby protecting the device and the lighting load. The NCP1095 employs an external pass transistor for flexibility of design, where the NCP1096 is a fully integrated solution.

Alongside the interface controller is the NCL31000 advanced light engine from onsemi that includes all of the elements necessary for a highly efficient and intelligent lighting system. Key to this device is the 97% efficient buck LED driver that supports high-bandwidth analog dimming and PWM dimming to zero current. The device has on-board DC/DC converters to power the system MCU and peripherals such as sensors, removing the need for discrete DC/DC converters. This simplifies the design and saves space and component cost.

Its ability to dim with 0,1% accuracy and high linearity makes the NCL31000 suitable for VLC applications, including light-based positioning. An elevated, stable reference allows true dimming to zero LED current, and removes all risks of ghost light. Comprehensive diagnostics including currents, voltages, and temperatures, are accurately measured, and provided to the system MCU via an I2C/SPI interface.

With the convergence of lower-power intelligent lighting due to LED technology and continued evolution of the PoE standard to a point where 90 Watts of power is available at the point of use, it is now possible to create sophisticated lighting systems without the need for extensive (and expensive) mains wiring.

While these systems can be used anywhere, they are particularly valuable in hazardous areas such as mines and oil/gas platforms, high humidity environments, as well as in close proximity to sensitive equipment such as in hospitals or on-board aircraft.

Drawing upon a long tenure in efficient power solutions and LED drivers, the NCP1095 and NCP1096 PoE-PD interface controllers and NCL31000 advanced light engine from onsemi reduce the design task by offering a proven, highly efficient, and fully integrated solution that helps get lighting solutions to market faster.