Home > Products > What is the right temperature point for my electrical enclosure?
Enclosures

What is the right temperature point for my electrical enclosure?

Electrical enclosures serve to protect electrical devices from adverse environmental influences, such as dirt, other particulates, moisture, or chemicals that could damage components. Plus, by housing electrical devices inside a secure enclosure or box, personnel are protected from electrical hazards such as electric shock, arc flash, and burns. However, electrical devices generate heat as a byproduct of their operation.

When convection cooling would fail to successfully regulate temperature in an enclosed environment, cooling units can preserve the lifespan and performance of enclosed electrical components. Cooling units provide closed-loop cooling, using a refrigeration cycle to move heat to the outside of a sealed enclosure while maintaining the enclosure’s mechanical isolation from the ambient environment.

Excessive moisture condenses on the evaporator, located on the enclosure side of the closed loop, where it can be effectively removed to keep the humidity level down and electrical components dry. These functions usually provide great value; however, too much of a good thing can diminish the efficacy of these units - and actually damage components. To avoid risking the safety and efficiency an enclosure is designed to ensure, operators must optimally set the temperature set point for any enclosure cooling unit. 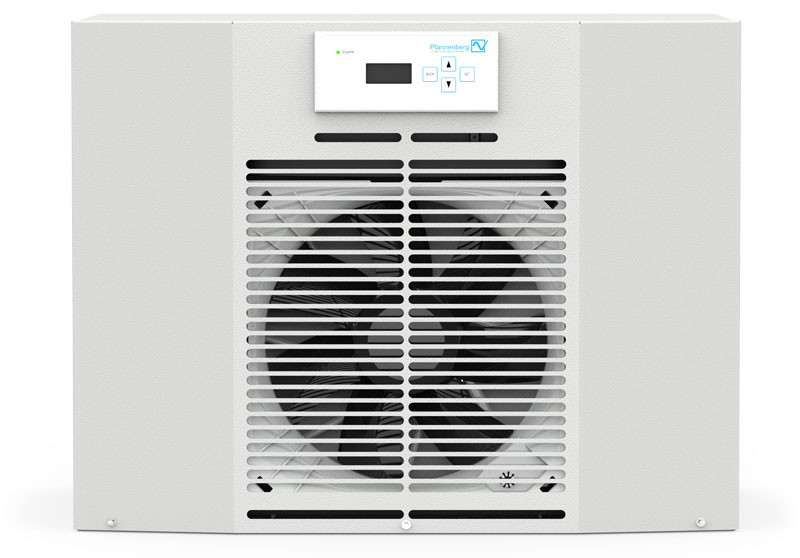 In order to keep this temperature in check, heat sinks are used for dissipation, and a lower operating environment temperature rating is needed for the heat sink’s convection to be effective. As a result, a common rating for VFDs is significantly lower at 40°C (104 °F).

When unfavorable, high temperature ambient conditions exist, convection alone - whether passive through venting of the enclosure and surface area dissipation, or forced, by using fans to exhaust the heat - cannot adequately maintain an acceptable operational temperature. In other words, if the temperature outside the box exceeds the target temperature intended inside the box, convection cooling is not going to work. In these cases, active cooling must be utilised. The enclosure air conditioner or 'cooling unit' is often used to serve this purpose.

Energy consumption and efficiency are ongoing concerns for operation managers and enclosure cooling units should not be exempt from scrutiny in these areas since compressor-based refrigeration technology consumes a fair amount of electricity. Excessive cooling leads to wasted energy, increased costs, and unnecessary wear and tear on the cooling units themselves. 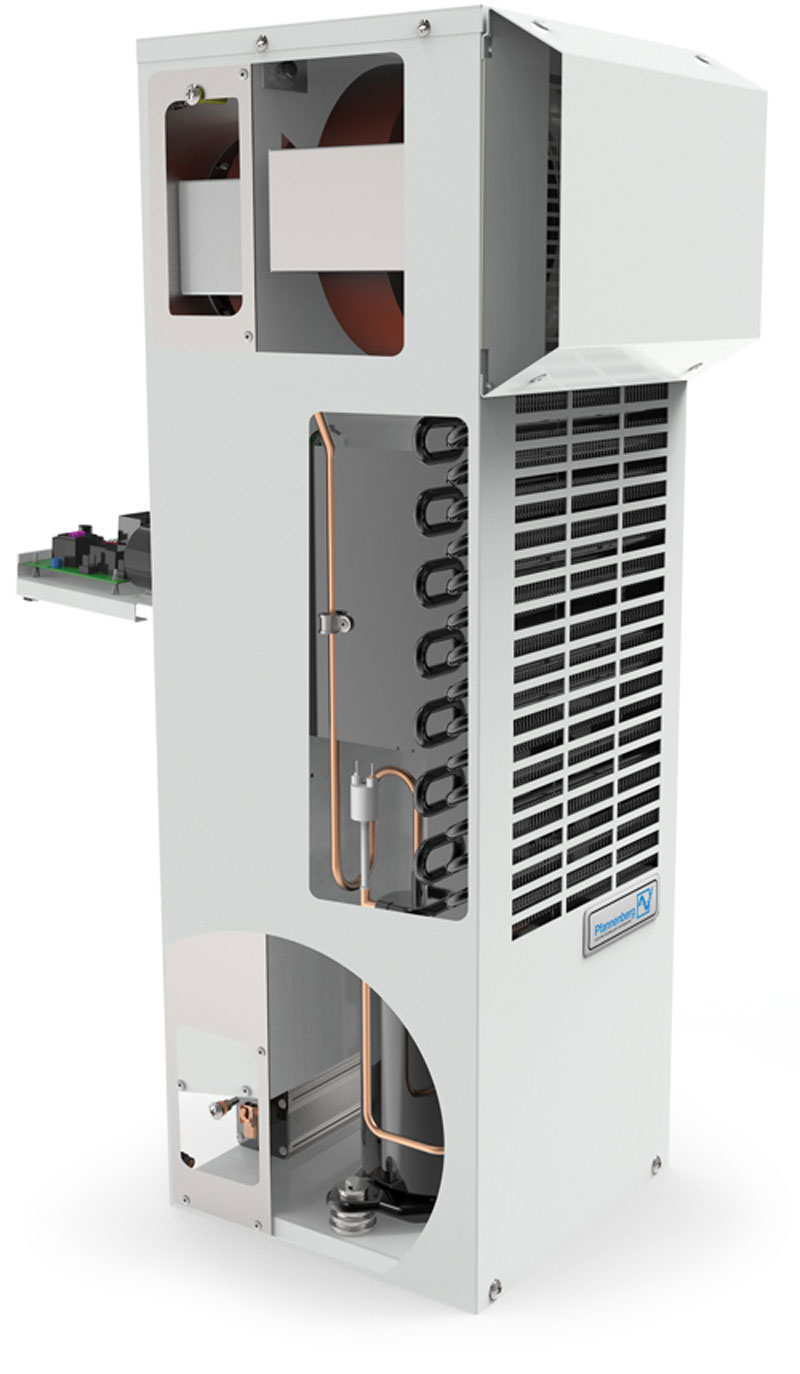 Additionally, the needless run time circulates more air through the cooling unit - resulting in increased maintenance needs for changing filters, rinsing condensers, and cleaning components. This is particularly true in environments with dusty, dirty airborne contaminants. Even highly efficient units with maintenance free, filterless designs like Pfannenberg DTS Series Side Mount Cooling Units, which are less susceptible to clogging from dirt buildup, might suffer over time if the temperature is set too low.

Condensation - always a concern for electrical equipment since moisture will cause corrosion, compromise resistivity, and increase the risk of short circuiting, equipment failure, sparking, and fire - forms on surfaces whose temperature falls below the dew point. It is common for the evaporator to be colder than the dew point, and Pfannenberg cooling units facilitate the management of condensation that forms on the evaporator through collection and drainage or burn-off.

Should this occur, heat is not removed from the enclosure and the high temperature sensed by the cooling unit’s controller signals demand for additional work by the refrigerant compressor. That, in turn, support the continued formation of ice and leads to a compounded negative situation.  Eventually, this leads to compromise or failure of the electrical equipment inside the enclosure due to excessive heat.

Troubleshooting hot spots
An important performance characteristic to be aware of with enclosure cooling units is the set point hysteresis (or dead band). The manufacturer could design the controller set point at the low point of the dead band, the high point, or the mid-point. Pfannenberg uses the mid-point technique with a 4°C hysteresis (+2°C / -2°C) and a factory default setting of 95°F (35°C). This means the refrigeration cycle will turn on at +98.6°F (+37°C) and then will turn off at +91.4°F (+33°C). This default setting is adequate for most applications; however, the user has the ability to change the set point to suit specific circumstances and requirements.

When a critical component such as a VFD experiences problems due to excessive heating, the first reaction might be to turn down the thermostat of the cooling unit on the enclosure. Although tempting, this may not be the most desirable corrective action and may actually lead to a more damaging situation since the root cause of the problem may not be getting addressed. Thermal imaging can help identify hot spots and the preferred corrective action would be to either relocate the critical components into an area of improved air circulation or add strategically placed circulating fans within the enclosure to mitigate the hot spot.

Cooling units provide effective, efficient temperature regulation
In conclusion, cooling units - when properly set up - provide a suitable method for active cooling of an electrical enclosure in order to keep electrical devices from exposure to temperatures that are beyond their acceptable operating limits. The acceptable operating temperature for most electrical devices is 40°C (104 °F) or greater, and excessive cooling wastes energy, unnecessarily increases costs, adds to the maintenance burden, and can actually pose operational threats. 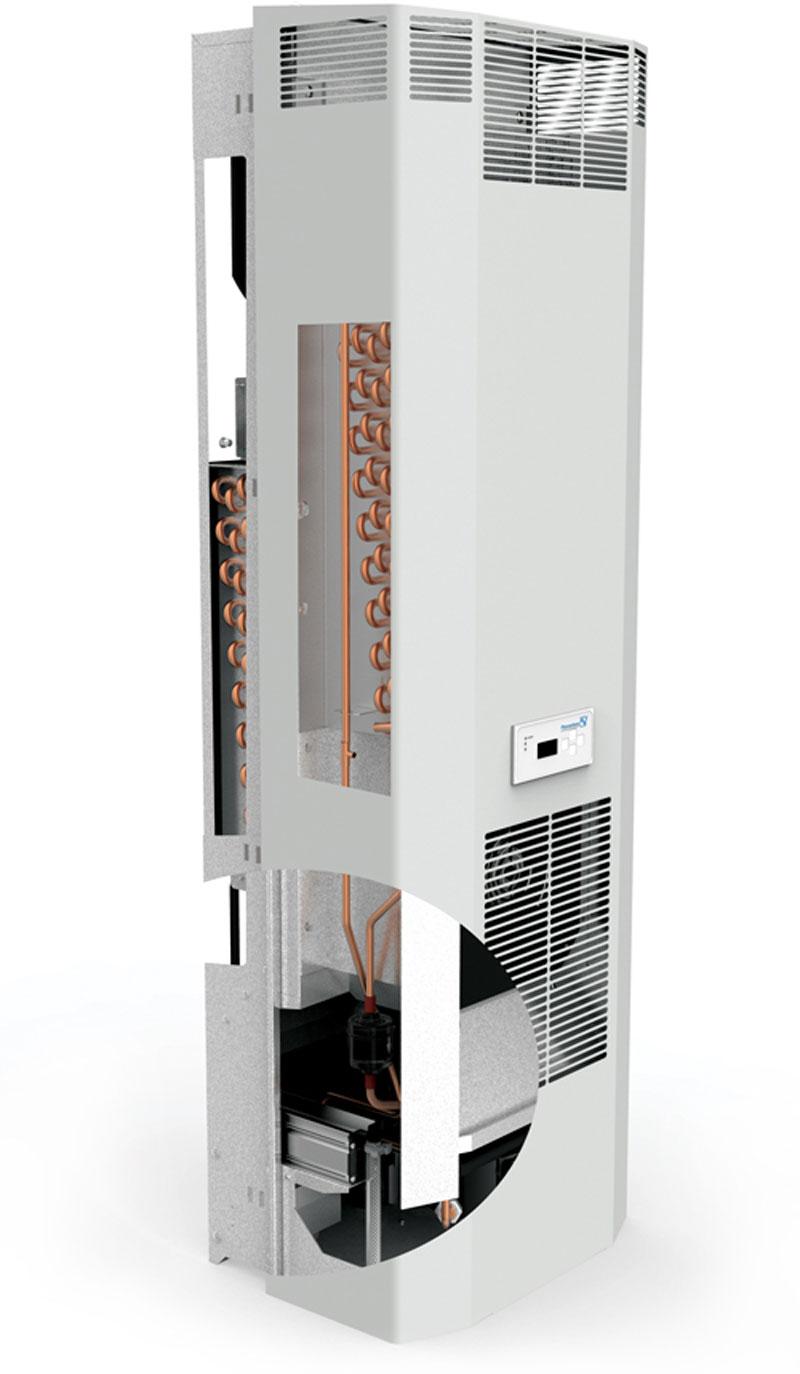