What do workers think about artificial intelligence?

Did you know 67% of UK workers see artificial intelligence as a technology that makes machines better assistants in the workplace? In particular, the intelligent control over voice commands or touchpads will make it easier for people to assign the machine new tasks (70%). Sixty four percent of workers believe that computer scientists will not be able to replace human social skills with digital assistants.

These are the findings of the automatica Trend Index 2018. In this context 1,000 employees in the UK were surveyed in a representative study of the population by a market research institute on behalf of automatica.

“Developments in AI mean we can expect robots to perform increasingly effectively as human assistants,” said Junji Tsuda, President of the International Federation of Robotics. “Robots do not only understanding and answering questions as they do today, but also acting on voice commands and gestures, and even anticipating a worker’s next move in order to remove an obstacle from her path.”

AI innovations for close human-machine collaboration must meet stringent safety requirements. That's why it takes more time to get to market than for AI software applications that can be tested and customised in a simulated live setup. Workers' trust in protection from the state is extensive: 74% of employees say it is important to them that AI will be strictly controlled by law. 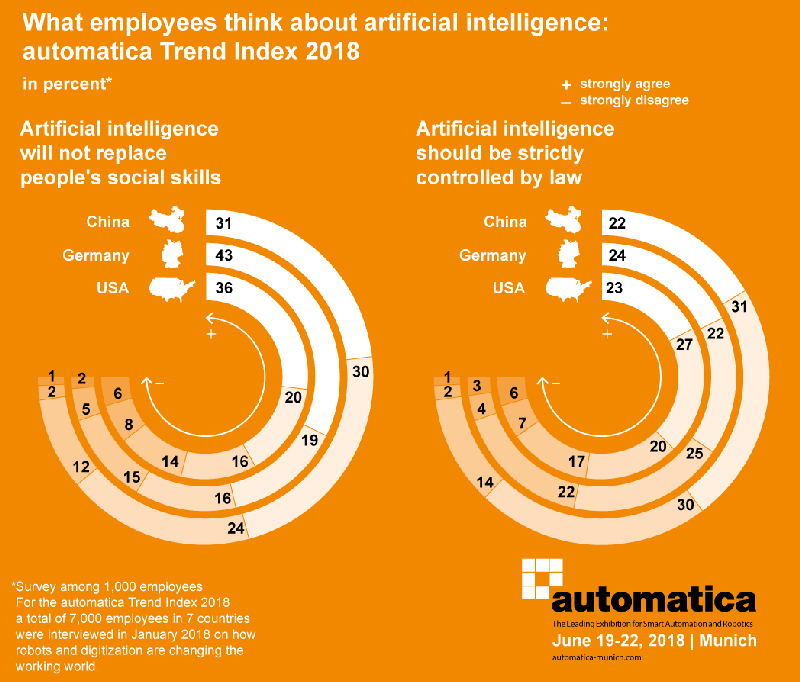 The use of machines that are enabled by AI to handle tasks independently will, according to some 60% of respondents, enrich the workplace. However, just as many employees consider the term 'artificial intelligence' to be misleading because a machine cannot learn intelligently or act autonomously like a human being.

On the question of how AI will affect the world of work, Dr. Wieland Holfelder from Google in the run-up to automatica 2018 in Munich: “In principle, there is nothing artificial about artificial intelligence. It's made by humans for humans - so we need to maintain that spirit.