Sit back and enjoy the Concept-i ride

Many new ideas are being shown off this week at CES, including Toyota’s vision for futuristic cars. Concept-i is designed to include artificial intelligence which is able to gain information about the driver, to a level never seen before, and eventually ‘building a relationship’ with the driver.

The car is said to be built around the drivers needs and has technology powered by new ‘Yui’ AI software. The vision from Toyota is the Concept-i for 2030 driving where the car will be a home on wheels, however the technology will make an appearance before that on other Toyota models.

Toyota wants you to become attached to this material object as it hinted about the direction it aims the car to go in by ‘creating a bond between the car and its driver.’

With its gullwing doors and a futuristic style it is far from your average four-door car. The AI system inside the vehicle will be able to use light, sound and touch to communicate information about the journey. 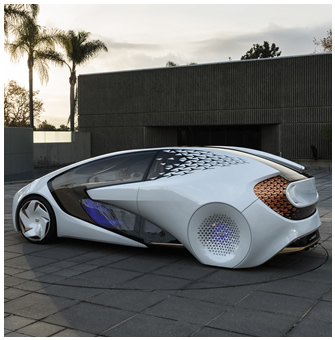 The entire focus of the Concept-i is the human inside the car, even if that person’s interactions will come through an AI system, it will begin to learn the drivers characteristics, traits, likes and dislikes through sophisticated biometrics and obviously will learn more, the more you drive.

A spokesman for Toyota said: "Information is revealed where and when it is needed. Yui appears on the door panels to welcome the driver and passengers as they approach the vehicle."

Upon entering the car you are greeted by Yui, a pulsing circle on the centre console, which then raises up to meet your hand to welcome you with a handshake. Yui then moves around the interior at whim appearing on every time of interface, some you weren’t even aware existed.

The idea behind Yui is to make you feel warm and welcome as you travel in the car, and as it learns and tailors the car to your mood and personality.

Yui can hold full conversations with the drivers to warn them of dangers or keep them alert, and its information can be displayed whenever, wherever.

Not only is the vehicle able to communicate with the driver but illuminated panels and a rear end allows text to be displayed to pedestrians and other drivers.

As the design is a concept it is unlikely it will be built the exact way it has been designed for consumers, but it does give a clear picture of the technologies and directions the creators envisage for the industry.

The CES show this year was where Concept-i made its first public appearance, and although there are many concept vehicles making a debut this year, the Toyota concept isn’t just focused on self-driving technology. The firm say the person in the car is totally in control to a level they want to be and can chose to drive the car in an autonomous or manual mode.

Toyota added: "Concept-i will seamlessly monitor driver attention and road conditions; so that it can increase automated driving to support the driver or help navigate dangerous driving conditions."

Concept-i has completely covered rear wheels which give off a futuristic look, whilst inside the design is simplistic, spacious and airy with a huge glass screen running along the front and the transparent scissor doors.