Home > News & Analysis > It's in the eye of the storm
Blog

It's in the eye of the storm

When faced with the destructive powers of nature there is not a lot that can be done. Severe weather systems such as hurricanes, typhoons, and winter storms regularly strike population centres, and their impact can be catastrophic. For the longest time it was difficult to accurately predict a storm’s arrival and might.

While many of you may have heard of the National Oceanographic and Atmospheric Administration (NOAA), a US agency that is charged with forecasting weather and monitoring storms, you may not be aware of a team of scientists and engineers within the National Center for Atmospheric Research (NCAR) who, since the 1970’s, have been supporting NOAA in predicting the strength and location of these natural weather phenomena through the development and deployment of a small but powerful sensor called the Dropsonde.

Earth Observing Laboratory (EOL)
NCAR’s Earth Observing Laboratory (EOL), located in scenic Boulder, Colorado, has been a leader in airborne research and instrumentation for more than four decades. EOL’s team of researchers and engineers mission is supporting atmospheric research and the collection of observational data on behalf of the US National Science Foundation.

EOL’s airborne programme provides not only aircraft but also a range of in‑situ and remote sensing instrumentation that facilitate the collection of priceless data to the global atmospheric research community.

One of these instruments is the GPS Dropsonde, which represents one of the most essential tools in the study of hurricanes and typhoons. GPS dropsondes are routinely released from both, manned as well as unmanned aircraft. The US Air Force Hurricane Hunters fleet of C‑130s deploys dropsondes when they fly within the vicinity and directly into the eye of the storm; the NASA/NOAA Global Hawk drops sondes as the aircraft hovers at 60,000ft (18,300m) way above a tropical storm.

On their way down, the GPS dropsondes descend through the atmosphere and collects detailed high resolution data that are otherwise inaccessible. The concurrent use of multiple dropsondes allows models to compose a three‑dimensional evolving profile of the hurricane. This essential observational data, once mined, not only enable improved hurricane prediction in the US, but also help scientists to analyse other equally challenging atmospheric phenomena such as atmospheric rivers, winter storm systems, and typhoons in the Western Pacific Ocean.

By incorporating sonde data into weather prediction models, hurricane forecasts tracks improve by as much as 20%. Needless to say, these sondes have quite a significant impact on society by providing improved early warning to minimising human casualties and saving millions of dollars of damage.

But what exactly is a GPS dropsonde?
The GPS dropsonde is the key component of the larger Airborne Vertical Atmospheric Profiling System (AVAPS), or in short, Dropsonde System. The highly sophisticated GPS dropsonde is a 30.5cm long cylinder tube weighing only 165g, equipped with a small electronics, a battery, and a core set of atmospheric sensors measuring wind speed and direction, humidity, temperature, pressure and vertical velocity.

The dropsonde electronics cylinder is attached to a quick‑opening parachute when launched from an aircraft. The sonde is powered‑up just before launch, requiring a fast startup by all sensors including a GPS receiver. When released into the eye of the hurricane, the sondes descend from high altitudes to the Earth’s land or ocean surface and take measurements of hurricane parameters every half‑second, delivering a precise detailed profile of the atmosphere.

The acquired data are transmitted by real time radio telemetry to a data system onboard the aircraft, where the data is displayed and archived. Once the dropsondes have reached the surface, all data collected during the descent are sent via satellite to one or more of atmospheric research centres, the National Hurricane Centre and the World Meteorological Organisation. 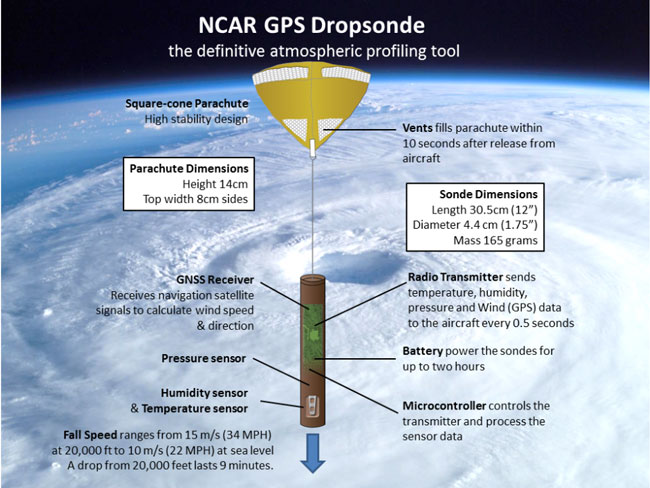 Not without GPS technology
Among the technologies used in the dropsonde, GPS satellite positioning has been critical to the success of improving hurricane forecasts, since its debut in 1997. The dropsonde is used to determine the structure and intensity of hurricanes. The GPS receiver in particular helps to measure the winds at specific altitudes. Key are the horizontal velocity measured by the receiver, the vertical velocity and altitude as well, while actual latitude and longitude aren’t relevant.

The GPS receiver must also be able to deliver fast satellite acquisition even with a cold start. As the sonde descends, the GPS receiver tracks the position and velocity of the sonde, where the change in motion corresponds to the atmospheric winds.

A 4Hz navigation rate allows precise measurement of turbulent winds close to the ocean surface (3m). The sensor data, GPS receiver 3D position and 3D velocity provide key data in real time to the National Hurricane Centre and are crucial for studying the wind structure in the eyewall region of hurricanes. This information provided to the forecasting computer models combined with the knowledge of the analysis team enable improved forecasting of a hurricane’s intensity and trajectory. 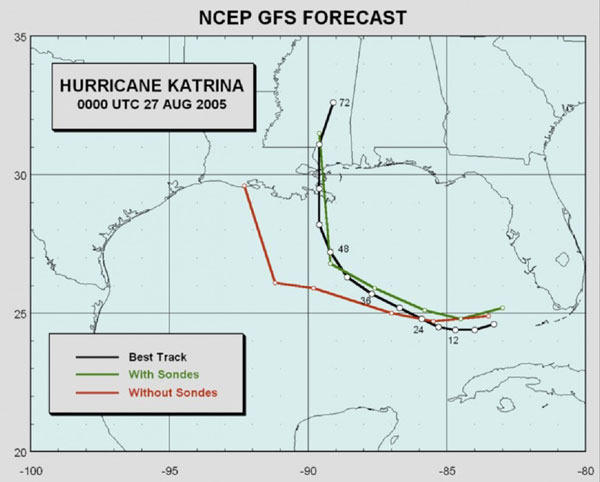 Looking ahead
The number of dropsondes needed vary depending on the aircraft mission, some of them requiring up to 90 sondes per flight. In the last ten years, about 30,000 dropsondes have been launched and this trend will continue into the future.