Home > News & Analysis > What is the most profitable area of tech?
Analysis

What is the most profitable area of tech?

The technology buying-and-selling sector can yield impressive profits. Gaming and recreational tech have led for many years, with the likes of retro consoles and Polaroids dominating the cashback limelight. But with the increase in smart home technology, perhaps collectors’ interest could shift towards a new area of investment?

Online marketplace OnBuy.com conducted a survey to discover which area of tech 1,784 consumers thought would become the most profitable if they were to resell in the future. Not only that, but how much profit they anticipate to benefit from.

What are the results?
Of the four sectors considered in this survey, 48% (856) believe home technologies will increase the most in value in the future. That is, home tech products such Amazon’s Alexa, Google Home, Smart thermostats etc. will be the most profitable when trying to resell.

In second place is gaming tech (VR and AR, portable consoles, wireless headphones for example), with 29% (518) predicting this area will hold many of the most profitable products.

Personal tech such as Fitbits, smart watches and smartphones takes third place with 13% (232) of consumers believing they’ll be able to resell for the most profit.

And finally, in fourth place, the tech area consumers anticipate growing in value the least over time is recreational tech such as drones, instant cameras and more – only 10% chose this.

The percentage profit that most consumers think they can reach is an optimistic 51 to 75% - 57% (1,017) of respondents chose this.

Finally, the profit margin the least number of people thought they could achieve was zero to 25% - 8% of respondents, that’s 143 people, chose this option.

Does this affect consumer buying habits?
OnBuy also wanted to discover whether the possibility of profit navigates people’s buying decisions. The respondents were next asked ‘Would you change what/how you buy if it meant a higher profit on resale?’

OnBuy’s managing director Cas Paton said: “As technology and its demands are continuously developing, it makes predicting future trends difficult. This is why OnBuy believes in the importance of the consumer’s opinion - as the targets for businesses, they will tailor their products around them. This survey is particularly interesting in regard to this. Will we see brands change based on these alternative consumer thoughts? Or will they stick to what they think they know?”

Products from which of the following tech areas do you think will increase the most in value in the future?

Thinking about the tech area you chose to be the most profitable, how much profit do you think you could achieve when reselling?

Would you change what/how you buy if it meant a higher profit on resale? 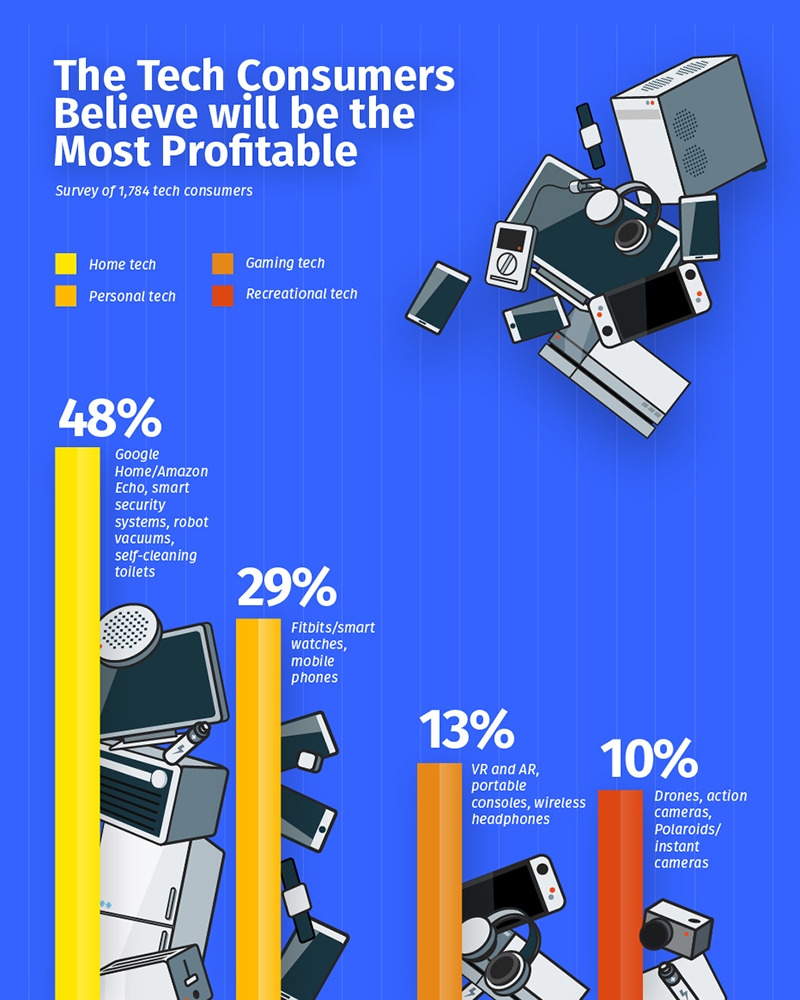 Read more
Analysis
What does 2020 have in store for technology?
Events News
Automechanika Shanghai embraces the evolving automotive ecosystem
Optoelectronics
Lighting range combines LED filament tech with retro aesthetic
Analysis
What makes science and technology firms tick?
Analysis
Aerospace trends for 2019
5G
Is market leadership a key driver for 5G tech investment?
Wearables
Electronic medical devices are going invisible
Analysis
Brits attitudes towards smart home technology in 2018
Analysis
What will the home of the future be able to do?
Analysis
Tech industry reacts to this month's budget speech
Analysis
The big fish are swallowing up the smart cookies
IoT
Could connected smart cities save our planet?