The semiconductor market decline in 2019

The global semiconductor market grew 13.7% in 2018, according to World Semiconductor Trade Statistics (WSTS). Each year, Semiconductor Intelligence review semiconductor forecasts and compare them to the final WSTS data. The company use projections which were publicly released from late 2017 through early 2018, prior to the release of January 2018 WSTS data in March 2018. These forecasts ranged from 5.9% from Mike Cowan to 21.3% from Future Horizons.

What is the outlook for 2019? The year 2018 semiconductor market finished weak with an 8.2% decline in the fourth quarter from the third, according to WSTS. The first quarter of 2019 will be even weaker. Most major semiconductor companies are expecting up to double digit declines in 1Q 2019 from 4Q 2018.

The exceptions are Qualcomm which expects a 0.9% increase (with 9.3% at the high end) and Infineon, which sees a flat 1Q 2019. Weak end demand and inventory adjustments are cited as key factors in the declines. Memory companies are the hardest hit, with Samsung down 24.3% in 4Q 2018 and SK Hynix down 13.0%. Micron just reported a 26.3% revenue decline in its fiscal quarter ended 28th February, 2019. Micron's outlook for the quarter ending 31st May is a 17.7% decline. 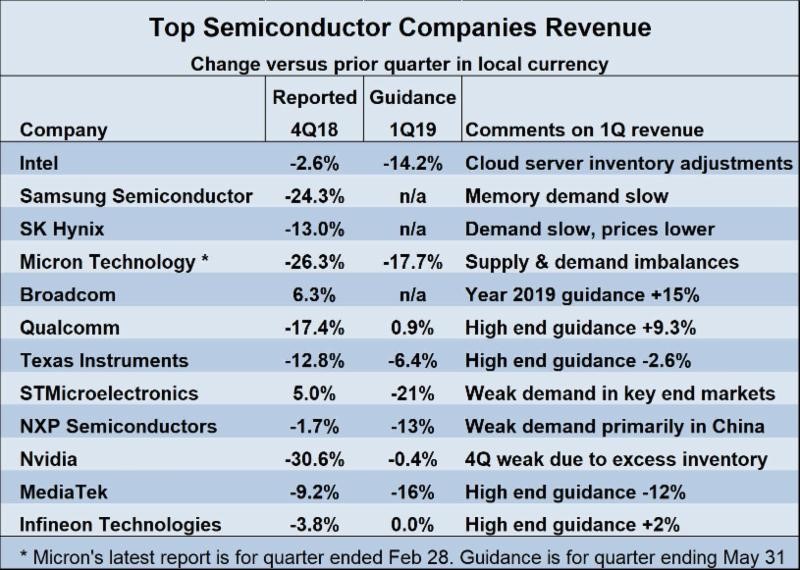 On the positive side, India continues to show of over 7% and accelerating, the ASEAN-5 (Indonesia, Malaysia, the Philippines, Thailand and Vietnam) exhibit steady growth of around 5% and Latin America is recovering.

Key factors cited by the IMF for the slowdown are trade tensions (especially between the US and China) and the uncertainty of the UK's exit from the European Union (Brexit). The outlook for 2020 show slight improvement, with acceleration to 3.6% world GDP growth led by emerging/developing economies. 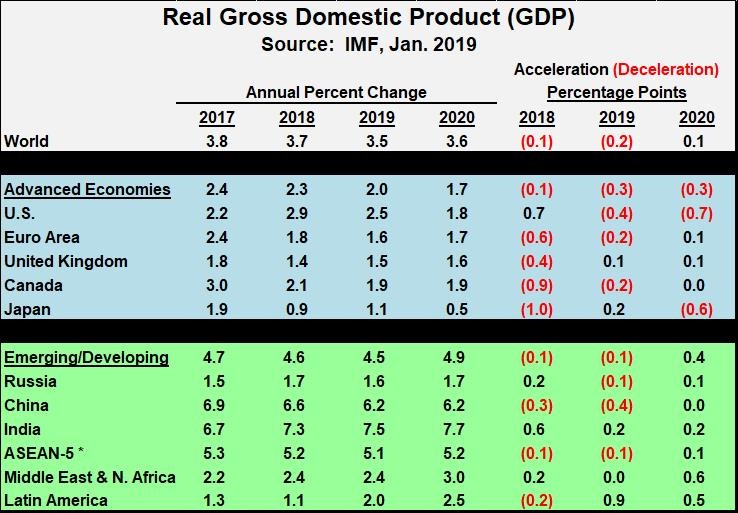 Recent 2019 semiconductor market forecasts are generally negative. Our latest projection from Semiconductor Intelligence is a 10% decline. Several forecasts are in the -5% to -1% range. Objective Analysis has a chance for a three-peat forecast trophy for 2019; but would have to share with Morgan Stanley if -5% is closest to the final number. 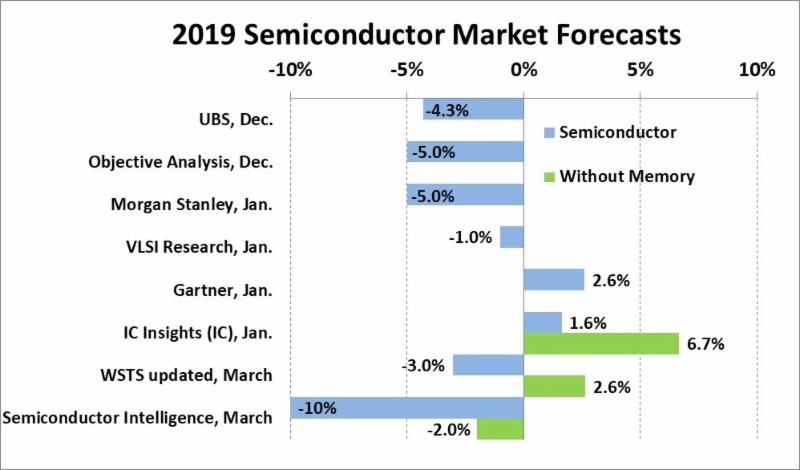 Despite all the uncertainty, few analysts expect a global recession in 2019. The expectations for the 2020 semiconductor market are mixed. VLSI Research and Gartner forecast a rebound in 2020 of 7.0% and 8.1% respectively. IC Insights projects a 1.9% decline in the 2020 IC market. Our preliminary 2020 forecast from Semiconductor Intelligence is 5-10% growth.