Living in a hyper-connected world

Connectivity is now part of everyday life. From the moment we wake up, to the minute we go to sleep (and now even during our sleep), we’re continually connected. Whether it be via a smartwatch, smartphone or smart car, people are increasingly becoming ‘switched on’. The reason for this is that we are constantly aiming to better our lives. But, with so much connectivity afoot, what happens if the network fails and what can we do to avoid potential down-time?

To answer this question, Anna Flockett of Electronic Specifier attended Paessler’s ‘Back to the Future’ event which journeyed through the history of computing, from the ultra-secret pioneering efforts of the 1940s through to the rise of personal computing and where we are today. Also known as ‘the network monitoring company’, Paessler developed PRTG, asoftware that monitors a whole IT infrastructure 24/7, alerts you to problems and issues that occur even before you notice them, and helps system administrators work smarter, faster and better.

At Paessler’s event, Anna met with Chris Dancy – the most connected human on earth. The relationship between Paessler and Dancy evolved from a Netflix series called ‘Dark Net’ in which Dancy discussed sensors and the importance of monitoring.

As someone that monitors almost every aspect of his life, and coming from a background in IT administration, Dancy commented: “You can’t figure how to monitor your life unless you have been a monitor.” He continued by saying that although a lot of companies approach him for work, it was great to work with Paessler as there was a clear link and association there. “And they allow me to be me, a lot of companies want you to be them.”

Dancy started his connected journey by gathering, organising, visualising, searching and automating the data that was his day-to-day life. His aim? “To design a GPS of life.” He collected the data, visualising information to see where his time was being spent, and how he could optimise his life.

To give a brief idea of the level of connectivity, Dancy uses sensors on the outside of his body to monitor muscle contractions in his arms, respiration sensors to monitor his breathing, and a sensor to record brainwaves and monitor his thought patterns. He also uses a number of sensors that monitor inside the body, helping to control blood sugar levels, body temperature, and blood pressure. 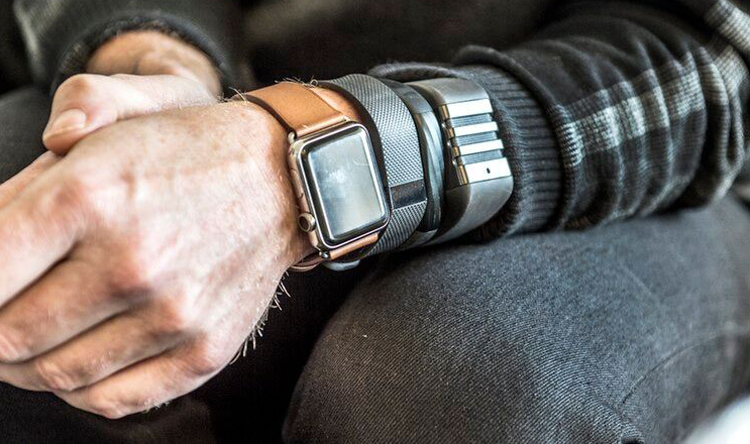 As you can imagine, the masses of data accumulated can become overwhelming so Dancy started recording all the information in a book. He said: “I turned my life into a monitoring network of computers.”

The areas he began to focus on were:

Then gradually he added more areas of his life into this data equation such as: entertainment – music, movies and books he had encountered, content creation – his blog and podcasts, and finally health and sleeping patterns.

When speaking with Dancy at Paessler’s ‘Back to the Future’ event, Anna questioned Dancy on what led him to becoming the most connected man.

Dancy explained: “I was reading Alan Turing, his note about when he wanted to build the first computer, and you know you don’t wake up and just want to do something amazing, you just wake up and say - there has got to be something else. For me, ten years ago I woke up and I was 300lbs, smoking so many cigarettes a day, my heart hurt – my chest actually hurt when I took an inhale, and anger was such a power motivator for me. Why don’t I know as much about me as the adverts that follow me around do?”

Dancy took this further and said you shouldn’t have to search your browsing history to know what’s important to you. “So, the idea was how can I create a system that just reminded me of what was important. It was something I felt was important to explore.”

“I woke up one day and thought there must be more to technology than just using it.”

Do we need to make a change?
Dancy was brutally honest in admitting his downfalls and stated: “I was tired of using technology and being used by technology.” He said he is constantly reminding people that your ‘smartphone’ is only smart if you pick it up and start using it. “It is completely useless without you.”

Technology is moving at a ridiculous pace, and Dancy believes: “The chances are, a baby being born in today’s age, will never have to type or drive.”

In 17 years’ time a lot of the cars being produced will all be autonomous and even using a keyboard will seem a thing of the past - everything will be voice automated or touch screen. The biggest change will be the lack of screens. Dancy said: “Everyone is addicted to screens, that’s fine, but they won’t be around for very long.”

The age we are living in is very exciting, but we aren’t looking far enough ahead and thinking about what it is going to mean for us.

Apple’s new digital health initiative means consumers will now be able to monitor all aspects of their lives themselves. Dancy said: “That is really good, right now I teach people to monitor their battery as that tells you where you spend all your time, and what apps you are in. My fear is that it can be kind of like judging you.”

Dancy believes that it can be dangerous to give everyone access to this type of information: we are giving everyone access to the same tools that technologists use, but unfortunately the people gaining access aren’t familiar with how to actually use them. This is why the relationship Dancy has with Paessler is so important to him. “I’d much rather have the same Apple monitoring tools in Paessler’s admins hands, than in a spouse’s or parent’s.”

Ultimately, in the connected world we live in – it’s possible to monitor everything we do, and in real time. We ought to be taking advantage of this technology by ensuring that the details and limitless information available are not falling into the wrong hands. If learnt to be used properly, the possibilities and benefits we can gain from monitoring systems of the future are endless.