Home > News & Analysis > It's like ebb and flow - it's unstoppable
Analysis

Have you ever considered where our beautiful new networked society is going? U-blox sat down to talk to Greg Williams, Editor-in-Chief of Wired, and Paul Gough, Principal, Corporate Strategy of u-blox, to look at some of the applications of tomorrow that could be made possible.

What's new about today's networked society?
Paul Gough - People have always been networked, but modern technology has helped to expand these connections. Today's connectivity is the foundation upon which we have built completely new personal and social services.

Greg Williams - I think the crucial difference today is the magnitude. We always have these devices in our hands. This expands human beings into our abilities. We have access to the most powerful computing stack ever, all the information the world has ever produced, and almost anyone on the Internet. And then there's all the data we create. If we can open that consciously and achieve that they can be shared, we could, frankly, make the world a better place - and make our businesses more efficient.

What kind of technologies enable 'networked people'?
PG - Until recently, connectivity technology focused on faster and more widespread access. We evolved from 2G to 3G to 4G. But now we see companies like u-blox, who make novel devices that consume very little power and are significantly smaller and less expensive. We can now think about connecting other objects, such as sensors, to the Internet. We will experience a world that is much more quantified, both in terms of our immediate surroundings and our personal spaces.

GW - We will arrive at a point where we can measure almost anything with the help of tiny sensors that tell us or tell us about the air quality when the garbage can needs to be emptied. It's the question of how we find out what makes sense.

How do you rate the development of wearables, which have a large share in the market of 'networked people'?
PG - The devices of today are still rather bulky, unwieldy power guzzlers. We need another generation of technology that takes it to a whole new level, making it more energy efficient and using other technologies, such as flexible electronics.

GW - We almost arrived at the fourth iteration of the Apple Watch and I think that's just the beginning. So now it's only developing in a direction where it really has an application. How do we integrate such connectivity into clothes and equipment we wear on the skin? It becomes particularly interesting when the devices are not only passive, but also incite us to different types of activities, predicting their state of health, or telling us to behave differently.

In view of the fact that z. For example, with wearables that track health, a lot of big data is being collected, what do you think about security and privacy issues?
PG customers today want to know the technical details of your device, but also what you are doing in terms of security. Safety has become a quality issue.

GW - That's an even bigger problem: privacy. There's a change going on right now. I am very much convinced that there will be public and regulatory requirements that Silicon Valley companies will be able to extract much less data than is currently the case and that they will have to share more of the data they actually extract. The awareness of data protection has increased, but security is not quite there yet. We all have to deal with that. And it's not just about manufacturers or consumers or authorities - that's ALL of them. 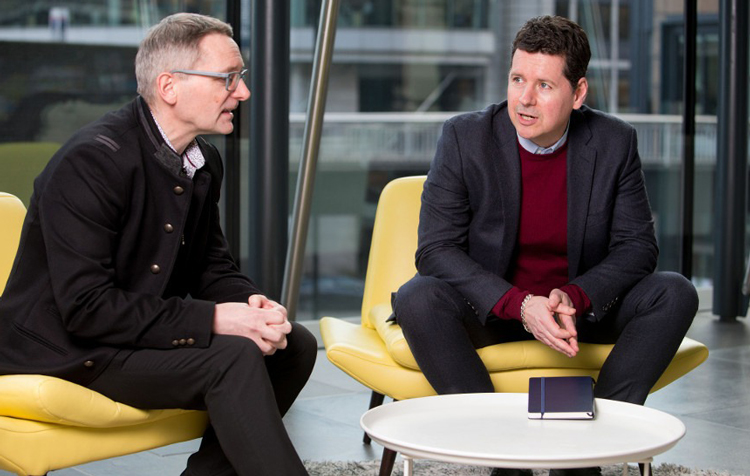 The constant collection of data can be perceived as a strong invasion of privacy. How much can we control ourselves and when is it too much?
PG - I think this new wave of devices and the whole problem with the generated data has its own momentum that keeps going. It's like ebb and flow, it's unstoppable. If you look at it positively, it becomes possible, for example, to make early diagnoses in the case of illnesses with these additional data. But there are obligations as well. However, I believe that there is no way to avoid big data.

GW - It's unavoidable because of our approach, by equipping everything with sensors. However, I believe that there is now a rethink because consumers want more access to their data and want to know exactly how they are used. In the meantime, they also understand that their data is the product - that they themselves are the product. Do not get me wrong. I think a lot about the internet is really great. Just look at how information can be shared and how information can be learned. However, I also believe that we have three or four companies that are effectively the doorkeepers of the Internet. Things need to change a bit in terms of the access and power they have over consumers.

What development do you see for the "networked people" in the next ten years?
GW- With artificial intelligence, we are now getting to the point where our machines and systems begin to anticipate our needs, in a way that was not possible even five years ago. We've talked about artificial intelligence for quite some time, but now we see that products are made that really bring us significant benefits. I believe Augmented Reality will definitely enter our lives because it has an application. I cannot see that the triumph of the smartphone could stop. It's the best device we've ever made. It has helped grow a gigantic supply chain that is responsible for much that is currently happening in the world of IoT and connected devices.

PG - The devices will certainly become smarter. Wireless devices have multi-radio capability and can now handle multiple frequencies and transmission standards. When they need to transfer information, they do it as efficiently as possible, with little energy consumption, or as quickly as possible, depending on the context. I think the same will happen with the microprocessors we work with today, which are based on Neumann architecture as standard. Finally we will get neuromorphic processors.

GW - I think autonomous vehicles will fundamentally change our cities, our mobility and our energy use. And that may be even more disruptive than the smartphone, because it ultimately changes our built environments. In 15-20 years, we may still recognize our built environments, but they will work in a totally different way.