Trying to read the runes of the semiconductor market is no easy task right now. Malcolm Penn, CEO of research company Future Horizons isn’t shirking the challenge. Despite a rocky 2019, Penn emphasises the industry fundamentals are fine, which should speed recovery once economic confidence returns.

That may not be for a while yet as Brexit and US/China tariff tit for tats undermine an already fragile global economy.

Market sentiment in the third quarter is now looking more positive, though Penn questions whether the worst is over. And he asserts even a positive second half will not repair the damage inflicted by a grim first half to 2019.

He’s looking at spread of a 14% to 16% decline in the global semiconductor market this year with his best bet at 15% giving a market value of $398.4bn.

For those pinning their hopes on 2020, there is better, though not stellar news. Says Malcolm Penn, “The rebound is a certainty, the timing is not.” He cites too many economic uncertainties clouding the near-term horizon.

Georg Steinberger, chairman of DMASS commented: “As stated in our last announcement, the slowdown was expected, due to weaker bookings in the prior periods, and it will continue during the year.

“Influencing factors split between industry-internal reasons – overcapacity in memories, long inventory tail at big customers, lacklustre sales in consumer products, suppliers taking back business from distribution and subsequent price declines – and macro-effects like trade conflicts, Brexit and economic uncertainty throughout the industry, despite excellent opportunities. Combined with DTAM to TAM changes all have an effect on continued price pressure, which overall is influencing the magnitude of the downturn we see.”

At country and region level, Q2 presents a very disparate picture, from double-digit growth in smaller countries to double-digit decline in medium-sized markets like Italy, Israel and Russia. Among the major markets, Germany grew by 0.1% to €681m, Italy shrank by 11.3% to €200m, France dropped 3.9% to €155m, UK (without Ireland) grew by 4.2% to €155m, Eastern Europe by four percent to €406m and Scandinavia by three percent to €207m.

Said Steinberger: “As the regional markets are very different in structure and customer nature, it is no surprise to see differences as described above. In EMS-driven markets in Nordic and Eastern Europe, all trends from double-digit growth to double-digit decline are visible in Q2, while for example the UK despite all Brexit anxiety holds up rather nicely for another quarter. The Italian market on the other hand lost 11.3% compared to last year, is negative for the second quarter and faces a long, hot summer quarter.”

At the product level, almost every area turned negative, except some selected Power, Sensors, Optoelectronics, Analogue, Memory and Logic categories.

While Programmable Logic dropped by four percent to €147m, Other Logic soared a staggering 19.3% to €137m.

“Last quarter looks a bit awkward if you compare products that are connected through project-driven sales,” observed Georg Steinberger. “Analogue grows while MOS Micro declines, Programmable Logic drops while ASSPs clearly explode, Opto and LEDs decline, and sensors grow. If you would pick a real setback, it would probably be the disappointing LED business. On a positive note Power-MOS has grown to the second-biggest product category in distribution, only outperformed by Power Management. And Digital Logic is slowly starting to overtake Programmable Logic.”

On prospects for the rest of the year in a shaky environment, Steinberger is loath to forecast: “Distribution is well positioned, excellently organised and more predictable than the rest of the market. It is about time that the real value of what we do for the industry is properly recognised by both sides of the supply chain.”

Graham Maggs, Director of Marketing, EMEA for Mouser Electronics is succinct. “Any distributor who tells you they are doing all right, its bullshit.”

And in recent meetings he has held with suppliers the message has been of ‘a cloudy outlook’.

And to confirm that diagnosis, Anglia CEO Steve Rawlings (pictured) pulls no punches. “I’ll be glad to see the back of 2019, roll on 2020.”

“It’s a tough market,” adds Rawlings. “The market is awash with inventory. It’s a good time for customers to buy.”

Rawlings cites a cynicism in the UK about the Brexit fiasco.

He commented, “Customers stocked up ahead of the March deadline, it didn’t happen. Now they are burning off that inventory, and aren’t inclined to buy anymore. It’s wait and see.”

Anglia at least has the advantage that it holds its inventory on shore in the UK. “It’s there, instantly accessible to UK customers whatever the weather, the delays at customs or the terms of any Brexit deal. We are currently holding a historically high level of stock, meaning that we might well continue to have availability when others don’t,” said Rawlings. “And for customers using the Anglia 80/20 inventory management system, stock can actually be held at their site. We are offering these customers the opportunity to hold increased levels of stock at no cost, ahead of any potential Brexit disruption.”

“Brexit?” asks Graham Maggs rhetorically. “Well who knows, and we don’t know how it will affect companies based in Europe as well as UK, though the drop in pound sterling value has obviously had an impact too.”

We’ve met at least 20 suppliers in the past month and we got indicators from them on performance and it is a cloudy outlook.” 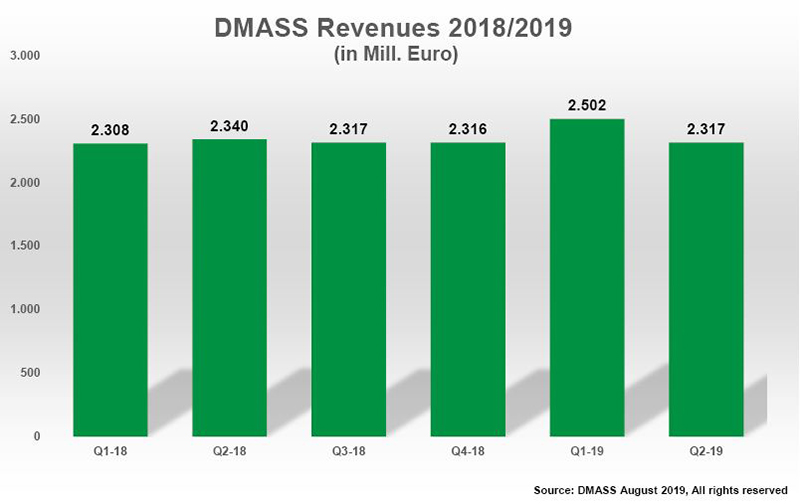 One brighter note is design activity.

“It is high and it looks healthy,” said Rawlings. “But companies are reluctant to give the green light to projects. We’ve got lots of design wins we would like to nail down.”

Nigel Watts, CEO at Ismosys echoed that observation. “We are working on plenty of design projects.”

Ismosys has a network of design centres in Europe, the US and Asia to support customers. Encouragingly Watts is seeing sign off on some of these projects suggesting at least some confidence among designers and manufacturers.

Like Watts, Mouser’s Maggs has a focus right now on emerging customers.

“That’s our job for suppliers right now. We have to increase the number of buyers and customers and we are doing that.” Business is obviously different in 2019, so we are analysing the market, looking at the types of customer out there, and we are up in all industry sectors, whether that be medical, security and aerospace and defence. We are seeing slowest growth in the test and measurement customer base and even that is up eight percent.”

Is that going to be enough to increase sales as in past years?” is the question Maggs poses.

And realistically the answer is probably no.

“What I will say is that we are just ahead of last year. Can that continue to end of year, well we’ll wait and see. There’s no doubt August was slower than normal – Europe spent more time on the beach!! And while September activity has risen, it isn’t by the spike we have experienced in past years.”

Maggs and Graham Munson, Mouser’s Vice President of EMEA Customer Service have developed some new marketing and business approaches which are bearing fruit.

A sector that has hit high service distributors is electronic manufacturing services. Farnell’s revenue decline in the past two quarters is partly explained by orders migrating back to the bigger broadline distributors as the market turns down.

Said Avnet CEO Bill Amelio, “This is a common phenomenon. When lead times are extended what happens is our supplier will shift more of the allocated supply into the catalogue guys because it’s a higher margin opportunity for them and of course higher margin opportunity for the catalogue guys. When lead times start to collapse, what happens is supply becomes more available and then it reverts back into the broad line guys, and customers will naturally shift from something that cost them more to something that cost them less and that’s the phenomenon that you see.”

Not that this scenario daunts him. “We anticipate another $100 million of inventory investment in Farnell over the next 18 to 24 months for SKU expansion.”

“Business in the EMS sector is significantly down,” Mouser’s Maggs agrees. “They were coming to us last year for product shortfalls because we hold products not stocked by others. With specific resistance values and component characteristics, our inventory has a unique profile, our CEO Glenn Smith insists on it,” added Maggs.

And just to rub salt in the wound, after overstocking in the first two quarters, EMS companies are unloading excess inventory back into the market via brokers.

While Maggs holds some hope there will be an uptick in activity by the mid-October/November timeframe, he suspects, “like most people we will let out a deep breath when 2019 is in the rear view mirror.”

Macmichael is pretty sanguine about Brexit. “We would operate under WTO tariffs which are by no means punitive,” he said. “I’d prefer it not to happen, but it’s not a not a game changer.”

And like Rawlings and Watts he is upbeat about design activity, and hopeful for a second half recovery.

In the aerospace and defence market, things are calmer. Astute Electronics has established itself as a major component supplier to the sector and Managing Director Geoff Hill strikes a more upbeat tone.

“We’ve not seen too much volatility,” he remarked. “We have a focus on design and innovation using our suppliers products and we are building positions in emerging markets including India And Australia. I can see steady 6 to 8% growth for the business going forward.”

Early customer engagements are enabling Astute to develop what Hill describes as “the best solution in terms of technology and cost.”

“Our view that the March quarter would mark the bottom for this cycle based on end-market demand is proving to be correct,” said Steve Sanghi, Microchip CEO.

“We first experienced the down cycle starting in about July, August last year. So we've been in it for a year and have been reducing inventory in distribution in channel, in major OEM customers and inside and after multi-quarter inventory correction, we are actually seeing the backlog is up from prior quarter and we are seeing some strength coming back,” he added.

One warning note is of course the outcome of both the US/China trade spat and Brexit.

“Our customers and distributors are blaming the weak business conditions in Europe to the effect of very weak exports to China as well as uncertainty due to Brexit,” said Sanghi.

Arrow President and CEO Mike Long describes the present market position as “bouncing along the bottom. So, our belief is we are seeing some of the worst of it at this point.”

Going forward, he is still concerned about Germany.

“Is Germany going to maintain where it is today, or is that economy going to get worse? I don’t know. So I do see caution there. I do see that China is still struggling, although our position in China is pretty good but I do see it struggling.”