Duo use electric power to drive into the future

From the very outset, Würth Elektronik eiSos has been a technology partner to the Formula E racing team founded by ABT Sportsline. Now it’s official: Following the takeover of the team led by FIA Formula E world champion Lucas di Grassi by Audi, Würth Elektronik eiSos has become technology partner of the new team under the name of Audi Sport ABT Schaeffler.

The new partnership agreement was signed by Dieter Gass, Head of Motorsport, AUDI AG, and the three managing directors of Würth Elektronik eiSos, Oliver Konz, Thomas Schrott and Alexander Gerfer on 27th September 2017 as part of the manufacturer’s exclusive team presentation of the first purely electric racing team in Neuburg.

Audi Sport takes over the starting position from ABT Sportsline. The team from the Allgäu region in Bavaria has successfully participated in Formula E since the electric racing series was founded and in the future, will support the Audi racing cars as an operative team. Audi Sport ABT Schaeffler starts its fourth season of the Formula E racing series from 2nd to 3rd December 2017 in Hong Kong. The Würth Elektronik eiSos Group will also continue to shape the success of the team as a technology partner. The agreement with Audi runs until 2021.

“Our passion for Formula E and our technological support for the team’s success has grown from season to season. With the racing event in Berlin and the world championship title of our driver Lucas di Grassi, this enthusiasm has reached a new peak,” explained Alexander Gerfer, CTO, Würth Elektronik eiSos Group.

“With Audi joining as the first German car manufacturer, Formula E now receives a decisive boost as an innovation driver for eMobility. We are proud and happy to be part of this exciting development as a technology partner,” said Oliver Konz, CEO, Würth Elektronik eiSos Group. Audi, a Volkswagen subsidiary and Würth Elektronik eiSos, a Würth Group company, are a suitable match. Both companies stand for visionary thinking, pioneering concepts and for future-oriented technologies.

“I’m pleased Würth Elektronik eiSos has extended the existing successful partnership and will continue to contribute to our project,” said Dieter Gass, Head of Motorsport at AUDI AG.

Strong partners
Audi has lent its name to the team since the first Formula E season in 2014 and provides one of its factory drivers - the Brazilian Lucas di Grassi. Lucas di Grassi crowned the season with the Formula E championship title. Based on his performance, Daniel Abt looks well placed to become a Top 5 driver in the coming season. Taking an overall average of all races from Season 1 to 3, with 24 podium places in 33 races, ABT Schaeffler Audi Sport was the team to appear most often on the podium in the series. 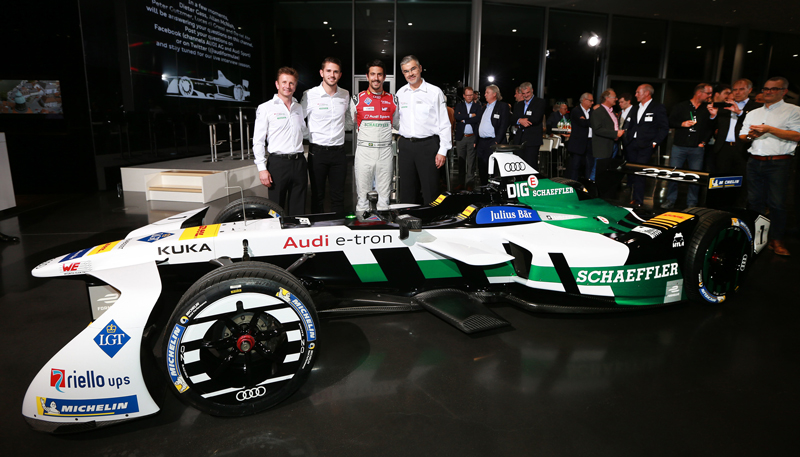 World premier of the Audi e-tron FE04 and tests in Valencia
The vehicle that will take to the track in Season 4 has been under development with the technology partners since November 2016. Audi together with world champion di Grassi presented the corporation's first purely electric racing car at the world premier in Neuburg. The new racing car for the coming season with the illustrious name Audi e-tron FE04 has a completely newly developed drive train with just one gear. A progressive new design in the primary colors of white, metallic green and black, immediately makes the Audi e-tron FE04 stand out from other cars. On the day of the team presentation, a new chapter will begin in Daniel Abt’s career. Abt will officially become an Audi factory driver and the former FIA WEC world champion Allan McNish will become team manager of the new Formula E racing team.

So the fourth Formula E season promises to be even more exciting. The race series originally started with the same car for all teams, but with each season more areas were opened up giving teams optimisation opportunities through their own innovations. Extensive tests are currently in progress in Valencia before all four Audi e-tron FE04’s set off on their journey to Hong Kong at the beginning of November for the start of the new Season on 2nd December at 4pm local time.

Technological support
Würth Elektronik eiSos managed to put innovative solutions onto the race track in the past. For example, high current ‘REDCUBE’ terminals have been installed on the inverter boards since the second season. In the third season, Würth Elektronik eiSos and ABT Sportsline jointly optimised the backup battery for the cockpit. The associated battery charger was also jointly developed as part of the technology partnership. Würth Elektronik eiSos views the fact that it can be specifically involved in the development of the Audi Sport ABT Schaeffler Team racing car as an opportunity to deploy components under extreme conditions and to advance solutions for eMobility.