There is no doubt that the IoT is revolutionising industry, and businesses are rapidly recognising the revenue opportunities that can be realised via connected, intelligent devices. Over the last few years the IoT ecosystem has evolved and matured to the point where it is now a very attractive proposition for companies looking to invest.

Whether it’s your new car that comes preloaded with a host of apps; a smart home device that allows you to control your heating; or your fitness tracker that tells you your heart rate; it’s all IoT. A major push from industries such as manufacturing and automotive towards digitalisation, combined with a growing interest from mobile network operators to expand their businesses beyond mobile broadband, will see consumer spend on smart devices in Western Europe exceed €12bn in 2020.

It is predicted that the enterprise and automotive IoT market will grow to 5.8 million endpoints this year, representing a 21% increase on 2019. Similarly, the highest user of IoT endpoints will be the utilities sector which will reach 1.37 billion in 2020. The segment with the highest growth rate in 2020 is set to be building automation (primarily driven by the growth in connected lighting devices), followed by automotive and healthcare.

In 2020, revenue from endpoint electronics will total $389bn globally and will be concentrated over three regions: North America, Greater China and Western Europe. These three regions will represent 75% of the overall endpoint electronics revenue. North America will record $120bn, Great China will achieve $91bn and Western Europe will come in third totalling $82bn in 2020.

So, all-in-all, that’s a lot of endpoints, devices, sensors, signals, and crucially power. Therefore, the management of that power will be vital as the industry continues to grow.

Many IoT devices are single charge, battery powered and require a low level of maintenance. Accordingly, the proliferation of wireless sensors supporting the numerous IoT devices has increased the demand for small, compact, and efficient power converters tailored to space and thermal constrained device form factors.

With this in mind, standardised by 3GPP, Narrowband IoT (NB-IoT) is a radio access, low power wide area (LPWA) technology, which is cost-effective and energy efficient, and can enable the deployment of a high volume of low complexity, connected devices intended to transmit small data packages.

NB-IoT employs a new physical layer with signals and channels to meet the demanding requirements of extended coverage in rural areas and deep indoors, while enabling very low device complexity. The underlying technology is much simpler than that of GSM/GPRS modules, and the cost of NB-IoT modules is likely to decrease rapidly as demand increases.

Supported by all major mobile equipment, chipset and module manufacturers, NB-IoT can co-exist with 2G, 3G, and 4G mobile networks. It also benefits from all the security and privacy features of mobile networks, such as support for user identity confidentiality, entity authentication, data integrity, and mobile equipment identification.

NB-IoT has gained support and adoption from end-users, mobile network operators and device manufacturers. However, as well as requiring a cultural change within organisations, successful IoT implementation also necessitates a technology paradigm shift. There will be an estimated 50 billion devices connected to the internet by 2030 (that’s over double what it was in 2018, highlighting the rate of growth of the IoT across society). Each device includes sensors that collect data, interact with the environment, and communicate over a network. Therefore, finding an efficient and scalable way to build cellular connectivity into these billions of devices will be absolutely crucial – as is the ability to manage them over the course of their lifecycle.

Efficiently powering IoT devices is critical. The sheer number of devices involved means that changing the batteries on 20 billion devices every six months is simply not an option. While nearly all IoT technologies are developed to save power when they aren’t operating, they do draw energy when the modem is running and handling signal processing. And it’s here that NB-IoT is crucial.

Due to a simpler waveform, battery lifetime of NB-IoT devices can be as high as ten years and through its ability to support large numbers of devices over a wide geographic area, millions of devices could potentially connect via a single deployment. And by installing on current networks and leveraging existing cellular infrastructures, NB-IoT integrates relatively easily into a mobile operator’s existing IoT platform.

NB-IoT chips also have energy saving capabilities like standby mode which enhances their power consumption efficiency by entering hibernation when they are not transmitting data.

Remote SIM provisioning solves the challenges associated with the wide-scale roll-out of NB-IoT devices as it allows the user to change cellular networks remotely. This is hugely beneficial for managing the many remote mass IoT deployments.

The Global System for Mobile Communications Association (GSMA), an industry organisation that represents the interests of mobile network operators worldwide, has created its Embedded SIM Specification which provides a single, de-facto standard mechanism for the remote provisioning and management of machine to machine (M2M) connections.

GSMA Embedded SIM is a vital enabler for M2M connectivity including the simple and seamless mobile communications of all types of connected machines.

The combination of NB-IoT and RSP makes perfect sense for stationary, low-bandwidth and low-power massive deployments (eg. sensors) in remote and hard to access locations. But is it possible? The answer lies in enabling SMS, growth of NB-IoT commercial use and resolving the question of ‘waking up’ the device when sending RSP commands. It is worth highlighting that NB-IoT won’t suit all the use cases where RSP can be used.

NB-IoT offers application opportunities across a variety of industries and businesses from agriculture to utilities - ideally isolated, battery-powered deployments that are monitored remotely on a fleet basis and over an extended lifetime in excess of ten years. For example, a livestock monitoring system has been installed on a cow’s neck to collect and send a cow’s activity data to a cloud platform. The software in the cloud processes the data and identifies the cow’s estrus status in order to improve the yield of milk. Currently the estrus notification accuracy is above 95%.

With the mobile operator’s NB-IoT network, farmers do not need to deploy and maintain any communication network by themselves. The low power consumption feature enables cow monitoring devices to work for more than five years with a battery of only 5,400mAH.

Similarly, smart street lighting is one of the most important NB-IoT use cases for smart cities. There are several challenges associated with a traditional smart streetlight solution including network instability, and multi-hop network operation. A smart street lighting solution based on NB-IoT technology is composed of street lamp monitoring terminal equipment, NB-IoT network connectivity, and IoT management and operation management cloud platforms. RSP is an ideal solution for any remote, volume driven application. It also has the ability to allow a municipal to manage its connectivity contracts over the extended lifetime of the device, as well as offering connectivity insurance should the chosen provider have an outage.

The network structure is clear, the application protocol is simple, and it does not require any gateways. This greatly improves both the stability and the reliability of the system. At the same time, it can bring down operational costs by approximately 50% while allowing the control and status monitoring of each individual lamp, which makes the energy-saving configuration simpler and much more flexible.

Combining an NB-IoT device with RSP capability would on the surface appear to be a very simple task. It would include an NB-IoT connectivity module and a GSMA accredited and complaint M2M eSIM, followed by the completion of some device assurance and interoperability testing. It is at the selection of the cellular components stage that the process ceases to be straightforward, however.

To provide some answers to this challenging stage, Arm has considered the key barriers to the implementation of RSP for NB-IoT enabled devices in a new whitepaper which can be downloaded here - ‘Remote SIM provisioning over NB-IoT whitepaper’. 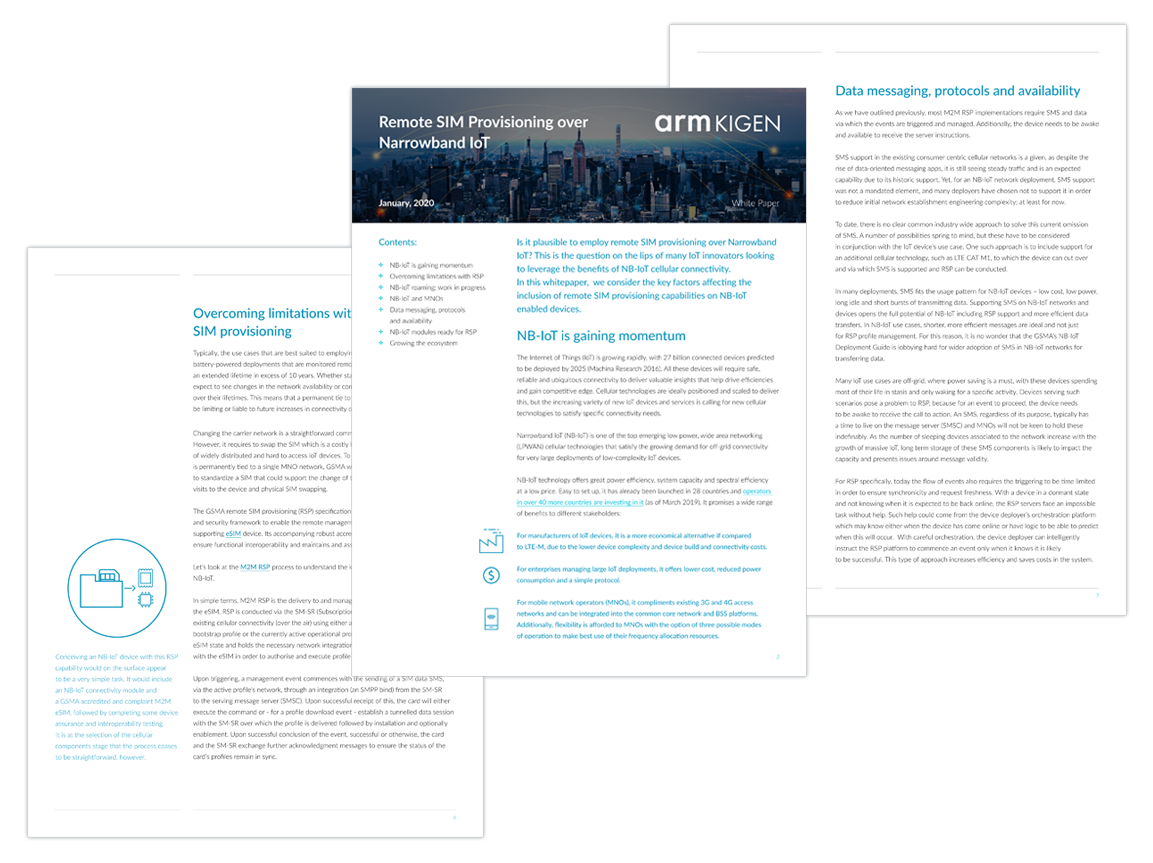