Home > Industries > Who let the AirDogs out?
Robotics

Who let the AirDogs out?

When people follow you around it can be a bit creepy, however not when it’s a drone. The AirDog is not about flying and following, it’s about getting the shot without taking anything away from what is most important, the action itself. A self-flying action sports drone, AirDog has been developed to follow you around and keep up with you as you perform all sorts of extreme sports.

All thanks to motion prediction technology and dedicated action sport flight modes, users can easily capture themselves in action effortlessly in the most demanding situations.

With a wearable, waterproof controller, AirLeash, you select the sport you will be carrying out, and then launch the AirDog drone with just the push of a button and you are free to go about your sport as you normally would. The drone ensures that your every move will be captured no matter how fast or high you go. 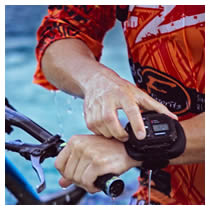 This small, agile, foldable quadcopter has been especially designed for action sport enthusiasts and filmmakers who currently use GoPro cameras.

The name was developed to sound canine like, as it mimics the traits of a dog by following where you go and whatever you do. The drone isn’t fazed by pelting rain, minus temperatures, massive waves, or insane places.

AirDog has dedicated flight modes for every sport to provide complete autonomy and superior user experience. One generic flight mode will not work with the AirDog as every action sport brings a set of unique challenges so the recording can be more accurate and true.

The tracker device to accompany the drone, the AirLeash can be strapped to your wrist or helmet, and unlike smartphones or handheld remotes the AirLeash again was specifically designed for action sports. It has clever software and sensors within and an intuitive layout of buttons, which makes it easy to use even when in the middle of the ocean or at the top of a mountain, and its waterproof design ensures your water sports are covered too.

As you are performing your extreme sports there are six ‘follow modes’ to programme with your AirLeash and app:

Auto-follow, will work with almost any sport, in which the AirDog will follow you repeating your exact movements while maintaining the position in preset distance and altitude at speeds up to 40mph.

Relative position follow, will ensure the AirDog maintains a constant distance away from you and at a set level above the ground also, even when you change direction the AirDog will remain the same preset angle from you.

Follow track, is the safest way to operate the AirDog, by simply going for one lap with the AirLeash it will record your track, and the AirDog will repeatedly fly over the same track and the camera will be constantly adjusted to aim at the rider.

Hover and Aim, allows the AirDog to stay in one position above the ground but continuously directing the camera at the AirLeash, perfect for smaller settings.

Circle, is a setting in which the AirDog makes circular rotations on a set radius and altitude, keeping the aim at the AirLeash.

And finally the Look down, setting is the most simple setting but can produce the best results, but simply ‘walking’ your AirDog above a ramp or obstacle where you are going to perform with a push of a button it will freeze its position and aim the camera straight down.

With sensor fusion technology data from inertial measurement unit, GPS and compass are fused to provide precision needed in action sports.Smart algorithms are applied on top of sensor data collected to predict motion and to account for unique motion patterns in every sport.

The AirDog will follow a signal from the AirLeash indicating your exact movements, and although it may be a bit bulky the company plans to shrink it half the size with even more attachment options.

The drone performs inflight calculations to correct its flying pattern, and points the camera at the user wearing AirLeash.

Take-off and landing is completely autonomous, freeing you to focus on your performance. It will land at the end of your track, or return to the take-off spot when the battery begins to run low. An alarm on the AirLeash tells you when AirDog’s battery is too low to continue.

There is also the AirDog app which gives you full control of the device, however you do not need the app with the AirDog the AirLeash is enough to work it, it’s just ad added extra to control your distance, height and angles reached. With the app it is also possible to create custom flight paths of your favourite tracks and map out your future routes.

The creators of the AirDog believe technology should not be limiting, so to ensure that the drone is fully flexible the entire device is fully foldable, fitting easily into the smallest of places such as backpacks giving you the freedom to travel wherever you want with it.

The AirDog uses LiDAR as a fall back system for ground collision avoidance, so it senses the distance between the ground and the AirDog whilst running a real-time analysis of terrain elevation. If there is an object or something obstructing the way, LiDAR will acknowledge this and make the AirDog increase its flight altitude, perfect for uneven surfaces and steep trails. 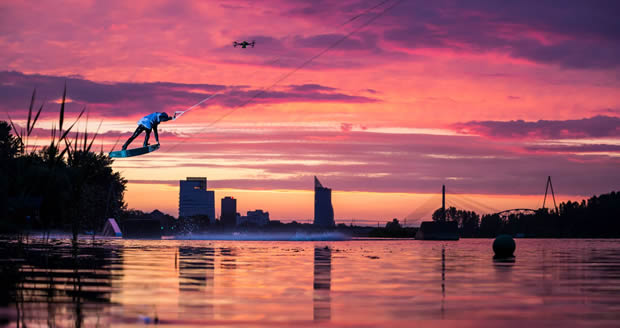 As an extra feature, the AirDog is designed to carry a GoPro action camera with a protective and secure housing, in which the camera will be powered by the AirDog’s main battery during flight.

The designers wanted to make the videos look as good as they possibly could, whilst looking professional, so they developed major stability into the device. The AirDog uses 2-axis gyro-stabilised gimbal with features such as, auto pitch and yaw (so the camera will always be pointed to the tracker), horizontal alignment, and vibration isolation, to ensure your videos are as stable as being on a tripod.