The full force of Mother Nature has recently been felt in the Caribbean and in Texas as hurricanes Irma, Harvey and Maria decimated large parts of central America. However, technology has stepped in to lend a hand to those caught up in the chaos. A floating survival shelter that, in the event of a disaster, can house between two and ten people for up to five days has been invented by two aerospace engineers based in Seattle.

Made from aircraft-grade aluminium, the spherical watertight capsules (see right) will protect occupants from the initial impact of a natural disaster, as well as sharp object penetration, heat exposure, blunt object impact and rapid deceleration.

The founders of the company, named Survival Capsule, claim the affordable pods are suitable for those caught up in tsunamis, tornadoes, hurricanes, earthquakes and storm surges when evacuation is not possible.

Engineers Julian Sharpe and Scott Hill came up with the idea for the Suvival Pod after the 2004 Indonesian Tsunami, which took the lives of approximately 225,000 people.

The capsules come in five different sizes. Entered through a marine door hatch, the interior of each one is equipped with seats and storage for five days worth of supplies and water per person.

“The capsule is a variable disaster solution, which means it can vary position according to the water depth, so it will never be inundated by water levels rising too high,” explained the designers on their website.

“It also provides warmth, safety and shelter during the initial post-disaster period before rescue crews and relief workers have arrived on the scene.”

The duo imagine that the smaller capsules will be used in private dwellings and family homes, while the larger capacity capsules are designed for municipal buildings, businesses, hospitals, airports, schools and general public safe havens.

The Survival Capsule was entered in NASAs 2011 Create the Future contest, securing a place among the top ten finalists.

Earlier this year, the first US Capsule sale was delivered to Long Beach, Western Australia. Customer Jeanne J ordered a two-person capsule in case of a potential tsunami disaster. The capsules are now available for pre-orders in the US and Japan. 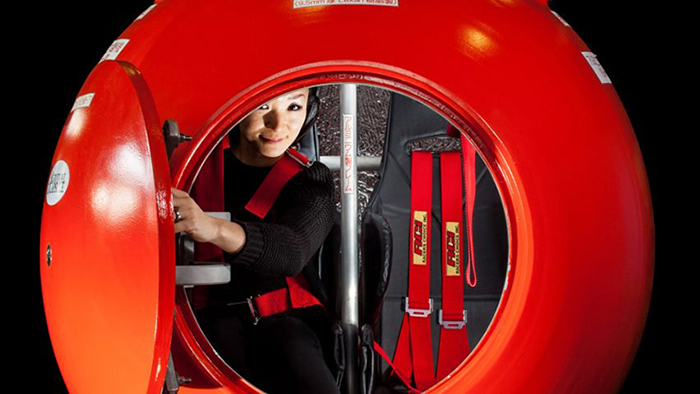 Sharpe and Scott are not the only designers to launch a new survival shelter concept in the past year. California-based survival company Vivos has repurposed hundreds of concrete military bunkers in South Dakota to create the world’s ‘largest survival shelter community’.

Families and groups can lease the bunkers to be used as refuges in the wake of a catastrophic event, such as a nuclear war, a viral pandemic or an asteroid strike.

Drones to the rescue
A bird’seye view of the Houston disaster areas left in the wake of Hurricane Harvey were used to help in the search and rescue mission and then in damage assessment thanks to NASA commercialised technology.

The Unmanned Aircraft Systems’ (UAS) Detect And Avoid technology (DAA), developed and flight tested at NASA Armstrong Flight Research Center in California, that was used in Texas, fulfils a primary goal that Armstrong researcher Ricardo Arteaga and his team had from the start – to help people.

“When I saw the disturbing images of the flood area, people in distress and danger on the news broadcasts, I had to act,” Arteaga said. “We have performed several years of successful simulations and flight tests. The technology is ready to use and I felt it should be in Houston.”

Arteaga called Kraetti Epperson, CEO of Vigilant Aerospace Systems of Oklahoma City, and asked him if he could use the technology proven in research flights at Armstrong, to assist with the search and rescue mission in Houston. Within the hour, Epperson was packed and on his way.

Vigilant is an Armstrong partner with a licensing agreement with the NASA centre for the technology included in its commercial product called FlightHorizon. Manned and unmanned aircraft are enabled with the hardware and software that obtains synthetic cockpit views and detect-and-avoid commands to improve flight safety.

Once in Houston, Epperson trained a group of eight volunteer UAS pilots how to use the technology on their eight aircraft in support of their humanitarian flights for the Federal Emergency Management Agency, and other organisations to help in relief efforts and document damage.

The technology is a portable airspace safety system – monitoring for air traffic conflicts, providing traffic alerts and providing split-second avoidance guidance for drone pilots – as the unmanned aircraft travelled though some of the worst hit parts of the Texas Gulf Coast.

A transponder was attached to each drone and then used the receiver and the FlightHorizon on a laptop to monitor the drone and airspace during the damage assessment surveys.

“The UAS pilots had special FAA authorisation and focussed on 500 acre neighbourhood damage assessments, which took about two hours, exponentially less time than many other methods,” Epperson said.

Drones using this Automatic Dependent Surveillance-Broadcast technology and Detect and Avoid algorithm can detect other aircraft and calculate a trajectory to avoid a collision, while transmitting its real time identification, position, altitude and velocity. This allows the small UAS to map safe routes for rescuers in search operations.

ADS-B is similar to radar in that it identifies the location of an aircraft. However, where radar uses radio waves, ADS-B uses GPS satellite signals and aircraft avionics. The technology also brings unmanned aircraft a step closer to flying in the National Airspace System.

Drones equipped with the right technology are ready for search and rescue missions Arteaga said, and in the near future they will be able to carry out more complex missions like getting medical supplies and rescue equipment to people in distress in areas too dangerous for people to venture.